You know what's great when I'm feeling less than inspired about possible topics? Questions. Because THEN, all I have to do is answer the questions! No thought required! Brilliant! And lazy!

So, thanks to Anonymous who asked the following questions, which I will now answer in lieu of any kind of real post.

1) My recipe for collard greens. Recipe? What? I don't really have one. For straight-up greens, I usually just saute diced onion and garlic in olive oil, then chuck in the cleaned and chopped greens to stew in their own juices (and a little water) until they're done. And I don't like crunchy greens, so that's awhile. Sometimes I use chicken stock instead of water. Sometimes I dice and cook bacon first, then add the onions and garlic to that and proceed. Sometimes I am far, far too lazy to deal with the cleaning and prepping of greens, and I say screw it and get out the green beans I froze this summer.

2) My recipe for chard. See above, except no onions or bacon. And no additional water required, as chard is generally juicier than collards. But still the laziness and green bean fall-back occasionally.

3) How well cabbages keep in the cellar. Totally dependent on the cabbage. And the temperature and humidity in your cellar. You may recall the total failure of the green cabbages to keep in the cellar for even a month, with exceedingly disgusting results. But then, this was a really wet year, so they were maybe kind of damp going into storage. Generally, green cabbages don't keep as well as purple cabbages. We had a variety of purple cabbage last year that lasted until February. They were specifically identified as long keepers. We'll see how this year's purple cabbages do. They're a different variety.

That's all for now. Unless there are more questions.
Posted by Kristin @ Going Country at 5:43 AM 3 comments:

Labels: all about me, fun with food, gardens

My life seems to be filled with an above-average number of gross tasks. Yesterday was no exception, although at least it did not involve animal vomit or excrement. Always a plus. No, this time it involved rotting potatoes. And fruit flies. FUN!

See, I noticed the other day when I fetched some potatoes from the boxes in the Pit of Despair that some of the boxes had little fruit flies around them. Well, they LOOK like fruit flies, anyway. My insect identification skills are not exactly expert level, so they could be something else. Whatever, they're tiny little winged things that hover around. Further investigation revealed some potatoes with spots of white mold on them, and one box with a potato on the bottom that had just turned into one big pile of disgusting goo. Yum.

Have you heard the phrase "One rotten apple will spoil the whole bunch"? Same goes for potatoes. Which meant I needed to get the rotten ones out. Which meant going through every box and examining every potato. With a flashlight, because that particular room in the Pit of Despair has no light. So I stood there in the dark, pulling out potatoes and examining them with my flashlight, occasionally encountering slimy rot with my hands (GROSS), and waving away the little fly things.

However, the good news is that I don't think this is The Blight. There weren't that many potatoes affected, and the bad ones mostly just had some spots of white mold on them, most likely caused by being not entirely dry when they were stored. Because it was impossible to get ANYTHING entirely dry this summer, what with the constant rain and all. Seriously, I kept expecting the Ark to show up any day and the dogs and sheep to march on two by two.

So yes, I did the nasty chore. My love for mashed potatoes conquered my reluctance to sort the potatoes, and I can be assured of many, many bowls of mashed potatoes and cheese to come. Thank God.
Posted by Kristin @ Going Country at 6:05 AM 12 comments:

Don't ask me what that little jingle in the title is. I have no idea. Although I do somehow picture the seven dwarfs when I say it in my head.

My head is a scary and lonely place.

More harvesting. More filthy vegetables. More likelihood that I will, one day, actually have to enter the produce section of the grocery store for more than the lemons required for cocktails.

But I can't contemplate that sad day yet. Instead, let's contemplate my harvest from yesterday. WHEEE! 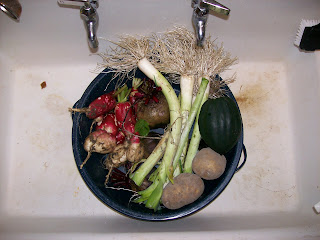 The last of the radishes, the last of the beets, not even close to the last of the leeks, a random volunteer squash that was delicious, and a couple of potatoes from the cellar.
We had the leeks (stewed), the squash (baked and mashed with butter), and the potatoes (baked) for dinner last night, with some of the most recent lamb chops from this year's lambs (broiled--and scrumptious). The beets and radishes will have to wait until tomorrow. My patience for dirty vegetables was exhausted last night by the time I finished dealing with the leeks and potatoes.

I think you could probably read something very obscene into that last sentence, but my mind is too pure for such things.

No One Say "Nesting"

Going to my parents' house always results in a cleaning frenzy when I return home. Because their house is so clean, you see. Of course, it's also only a few years old, which makes it just a wee bit easier to clean. And they have no animals. And no woodstove. And the house is surrounded by pavement instead of mud. And it's just the two of them.

Obviously, I do not aspire to their level of cleanliness, because frankly, it ain't gonna happen at Blackrock, with all its animals and 150-year-old dirt.

Monday I did the routine cleaning: the picking up, the dusting, the vacuuming, the sweeping. Yesterday I cleaned the chandeliers in the downstairs rooms. Why? I don't know. Because they were covered in cobwebs and the little plastic fake candle parts at the base of the bulbs were covered in fly specks. Good enough reasons, I guess. Then, since I had a dish pan full of soapy water to wash the candle thingies, I also washed some of the random glassware in the dining room that gets filthy when the woodstove is going: candlesticks, vases, the tray of whiskey glasses and decanter on the sideboard.

Here's the annoying thing about doing things like this: It's not all that noticeable. It's not as if someone would walk in and exclaim over the lack of cobwebs on my chandeliers. But they WOULD notice if the cobwebs were still there. And that is pretty much why I don't bother with this stuff on a regular basis. Self-satisfaction is not enough; I need validation from others, apparently.

BUT. Do you know what ELSE I did yesterday? I unclogged our bathroom sink. It was pretty gross, but ultimately much more satisfying than cleaning the chandeliers. I guess I would be a better plumber than housemaid.

Make of that what you will.
Posted by Kristin @ Going Country at 5:48 AM 7 comments:

Labels: all about me, Blackrock, confessions, domesticity

Remember when I said I was being forced to Target to register for baby junk? It wasn't exactly at knife-point or anything, but I sure wouldn't have gone without some coercion. In the end, my mother, sister, and sister-in-law accompanied me. Yes, I needed that much support. Because do you know what happened when I walked into the baby section at Target? I absolutely froze. Seriously. I had NO IDEA where to start. There's just so. much. stuff. All of it foreign to me.

And here's where I say thank GOD for my sister-in-law. She was the only one of the group to have had a baby in the recent past, so she could give recommendations and suggestions for a lot of the foreign objects. She was also helpful during the actual registering for the registry, which is done on a computer at Target. They have tricky little categories like "gender." And I was all, "What do they need to know my gender for? SEXISTS." And my sister-in-law was all, "I think that's for the baby's gender. Idiot."

She didn't really say that last part, but I'm sure she was thinking it. I know I was.

She was also intelligent enough to figure out that I had put in my parents' zip code instead of mine, which was why the computer was yelling at me to CHECK THE DAMN ZIP CODE, YOU MORON. And I was all, "WHY WON'T THIS STUPID THING LET ME CONTINUE? " And my sister-in-law was all, "I think maybe you should check the zip code. Idiot."

(Once again, she was too polite to say what everyone must have been thinking--the idiot part, I mean.)

She's a useful person to have around, as you can see.

Labels: all about me, baby stuff, confessions, family

How can so much laundry accumulate in just one week? And why do I have this horrible cramp in my leg? And most importantly, what in the world could have happened to the Vaseline I keep on my bedside table to prevent chapped lips? A. swears he hasn't seen it. It's unlikely a burglar with very chapped lips showed up and took only my Vaseline. Totally bizarre.

Now, if you'll excuse me, I have a pile of laundry the approximate size of Mt. Kilimanjaro to deal with. Welcome home to me!
Posted by Kristin @ Going Country at 6:01 AM 8 comments: