The pancakes I grew up with and ate until about four years ago were the standard pancake: White flour, milk, oil or butter, maybe some sugar even. They're kind of thick and puffy, and eaten with massive amounts of butter and maple syrup. Except when I was a kid, it was margarine and Mrs. Butterworth's. And I LOVED them.  I remember one period when I was about ten when I wanted pancakes every day after school. My mother was quite obliging about this, as I recall. Thanks, Mom!

We had pancakes this morning for breakfast. The batter was made with buckwheat flour--which, despite its name, is not related to wheat and therefore is okay for the gluten-sensitive members of my household to eat--some of the failed yogurt that I'm trying to use up, and melted butter. Plus cranberries.

About those cranberries. A. considers a pancake without blueberries to be a waste. One time a couple of months ago when we had run out of frozen blueberries, he used some of the cranberry sauce leftover from Thanksgiving.

Winner. So now I have a jar of cranberries cooked with sugar in the refrigerator to use for pancakes.

A. ate his cranberry buckwheat pancakes with butter and maple syrup. Cubby ate his plain. Charlie ate his with just maple syrup. The MiL ate hers with just butter. And I ate mine with plain yogurt and apricot jam.

Our pancakes are weird. And so are we.

And now it's your turn to talk pancakes, my lovelies! What's your preferred pancake and what do you put on it?
Posted by Kristin @ Going Country at 8:51 AM 5 comments:

Labels: all about me, Audience Participation Days, fun with food

When Vehicles Stage an Uprising

A few weeks ago, A. discovered that his beloved Roadmaster needed a new transmission. He brought it to the local very skilled but also very slow mechanics up the road. They've had it for two weeks now. The fact that they charge about half what anyone else charges slightly mitigates our annoyance at this snail pace. Slightly.

A couple of weeks ago, when A. was maneuvering his pick-up truck into position to get some wood he had cut, he slid in the snow and slammed into a guardrail. Now the driver's side door only opens partway and the taillights don't work, thereby rendering an already sketchy truck more or less unroadworthy.

This morning when I got back in my Subaru after dropping Cubby off at preschool, the car started to start and then . . . didn't. A. thought it might be the fuel pump. Or, much worse, the head gasket. Whatever that is. The Subaru is even now on the back of a tow truck on its way to the mechanic. A different mechanic than the one that has the Roadmaster.

So our household is now down to the MiL's car and one very, very decrepit pick-up truck. Super.

Labels: all about me, the A team

A Traitor to My Roots

Hey, it's Fat Tuesday! Did you have a gluttonous extravaganza of fat, alcohol, and sugar? Maybe some shiny beads thrown in there just for kicks?

Or did you, like me, surrender to your northeastern, Protestant surroundings and go to a Shrove Tuesday pancake supper?

Yeah. It wasn't exactly Bourbon Street up there at the MiL's church, which hosts this all-you-can-eat pancake supper with like ten different kinds of pancakes every Shrove Tuesday. But Cubby and Charlie really enjoyed the children's playroom (other people's toys are always the best, of course). And several of the MiL's fellow churchgoers enjoyed seeing Cubby and Charlie, because you know how it is when you don't see a little kid for a few months (or, ahem, a year . . .) and then you do. Gasps of amazement at their stunning growth all around.

Still. Next year I should at least wear some beads to eat my pancakes. Wouldn't want to forget where I came from.*

* Okay, so it's really my mother who is from New Orleans. My connection to that city and its Mardi Gras traditions is only that of a second-generation immigrant, you might say. But trust me, Fat Tuesday is way more fun to celebrate than Shrove Tuesday. Same day, not even close to the same kind of celebration.
Posted by Kristin @ Going Country at 6:07 PM 2 comments:

Labels: all about me, family, fun with food, MiL, randomness

I was sitting on the couch at 2:30 this afternoon, watching both of my children ram around the living room. As usual. Due to various circumstances, I did not get a dual nap out of them today. Which is why I decided I should maybe do my workout while they were awake.

Oh, the hilarity that ensued.

I didn't even attempt the newer DVD I'm doing, because most of it involves getting down on the floor for push-ups or plank stuff or abdominal exercises. Forget it. That is not happening with my children in the room with me. Although they would be quite happy to increase the challenge by piling onto my back or stomach as the opportunity presented itself.

I decided instead to do the first level of the 30-Day Shred DVD. Most of that is upright, if I skip all the abdominal stuff. Which I mostly did. The hand weights that are part of the program were sacrificed early on as items of interest to entertain the children while I continued to lunge around them and try to avoid kicking them in the head while I did my butt kicks.

Charlie's hand weight had to be confiscated because he kept throwing it.

Cubby had to be cautioned more than once to avoid doing his reps over Charlie's head.

Charlie tried to time his attempts to climb my legs with my jumping jacks.

Cubby kept enquiring why the women were missing clothes (they wear only shorts and sports bras, an outfit he has certainly never seen me rocking).

Charlie leaped on my stomach when I made one attempt at sit-ups. I managed to do eight before he landed on my kidneys.

And all this in fifteen minutes.

I think it's clear that group exercising will not be repeated in this household.

Edited to add: I forgot to mention my sporty outfit for this experience. I didn't take the time to actually change my clothes, instead electing to just exchange my slippers for running shoes and take off my wool sweater. So I did this whole thing while wearing long underwear and corduroy pants, plus a thermal long-sleeved shirt under a flannel shirt. You can see why Cubby was befuddled by the shorts and sports bra concept.
Posted by Kristin @ Going Country at 5:13 PM 2 comments:

Labels: all about me, Charlie, Cubby On his unauthorized Pack 'n' Play invasion: "I'm keeping Charlie entertained so he won't cry while you're in the bathroom." 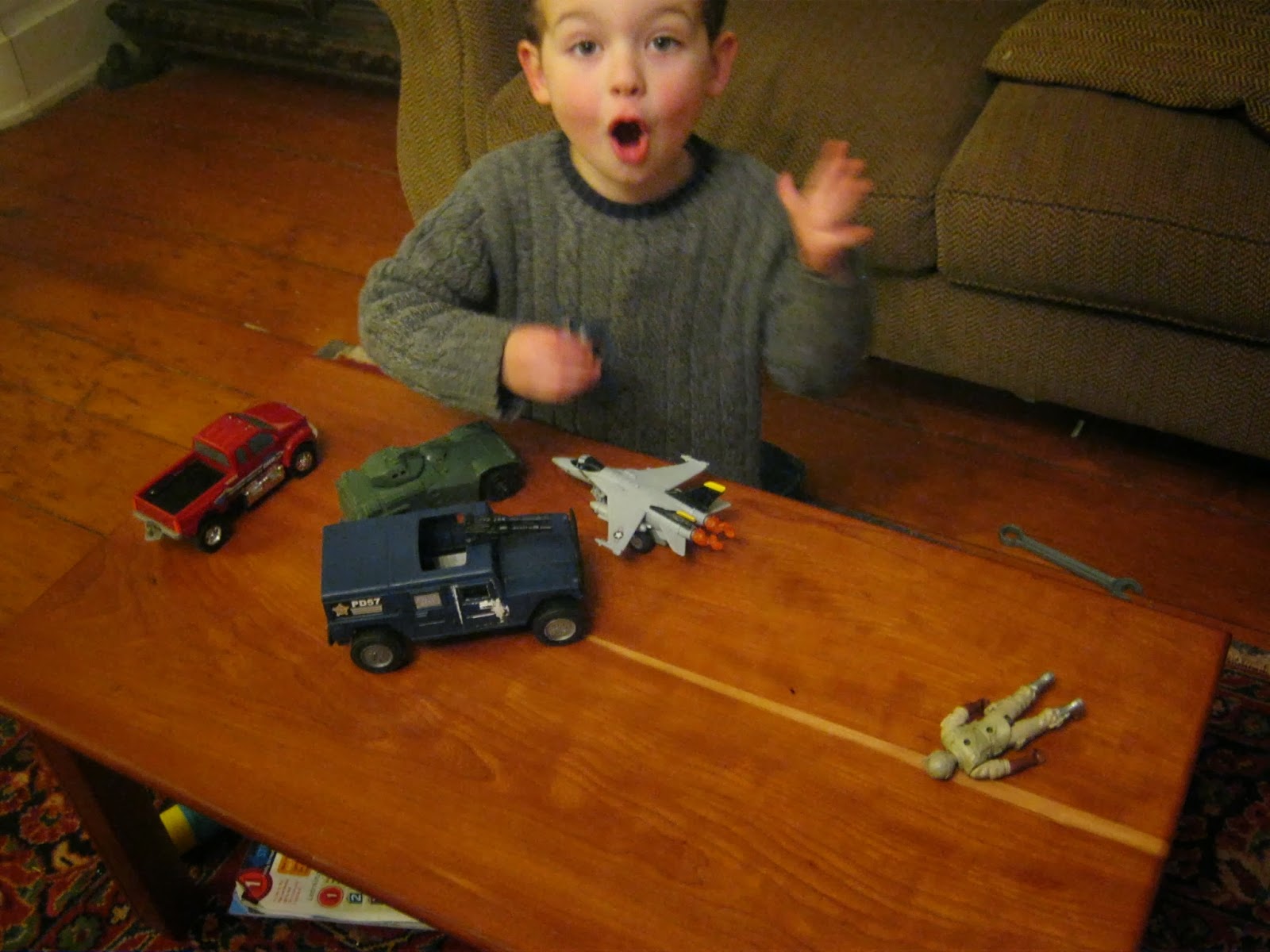 Boy with boy toys: pick-up truck, armored personnel vehicle (known to us civilians as an armored car), fighter plane (F-16, maybe? my dad the former fighter pilot is going to be so disappointed that I can't identify it), police truck, and one downed soldier. 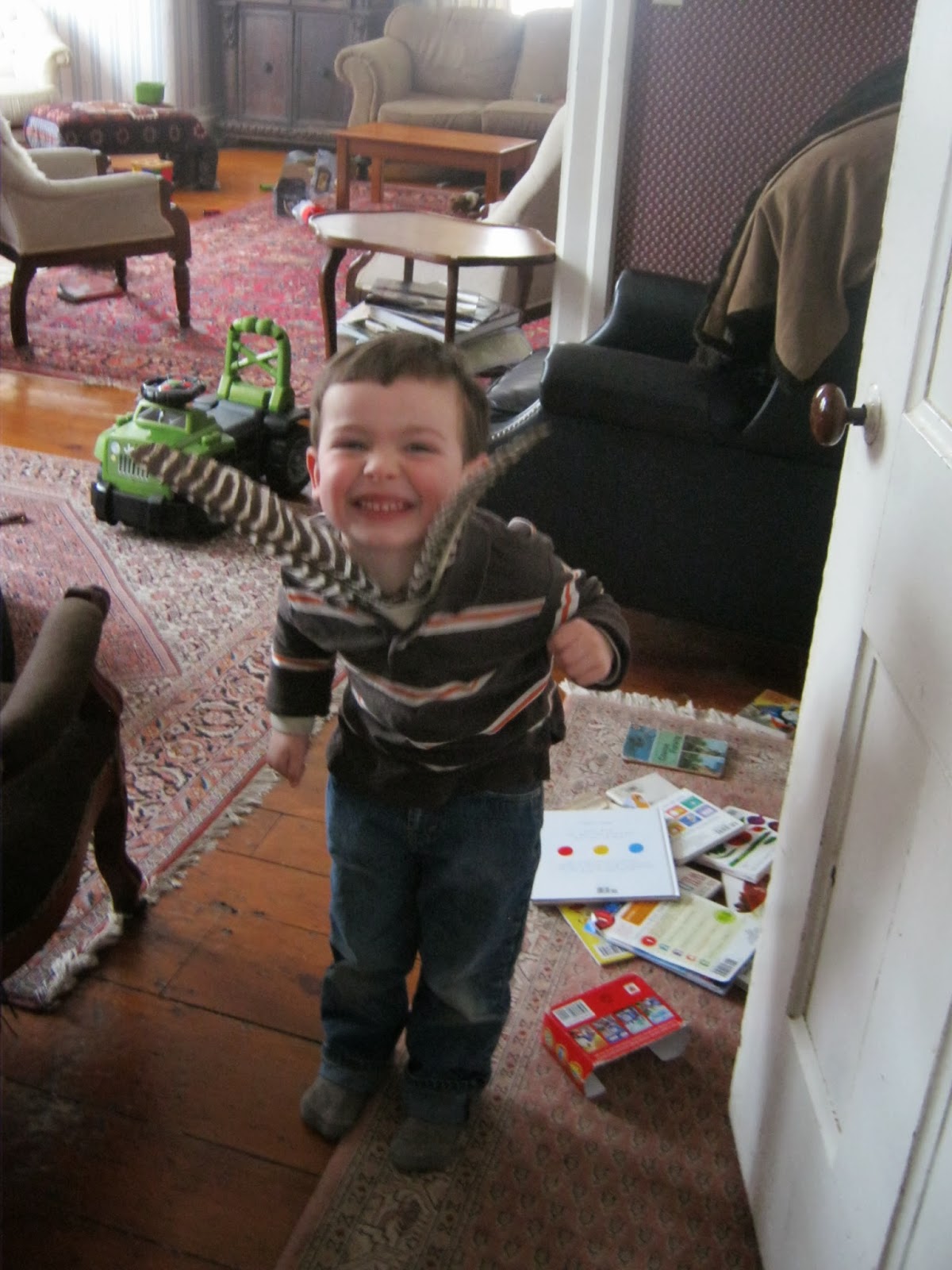 This . . . this is classic Cubby. Those are turkey feathers stuck in his shirt, but he informed me he was not a turkey; he was a monster. 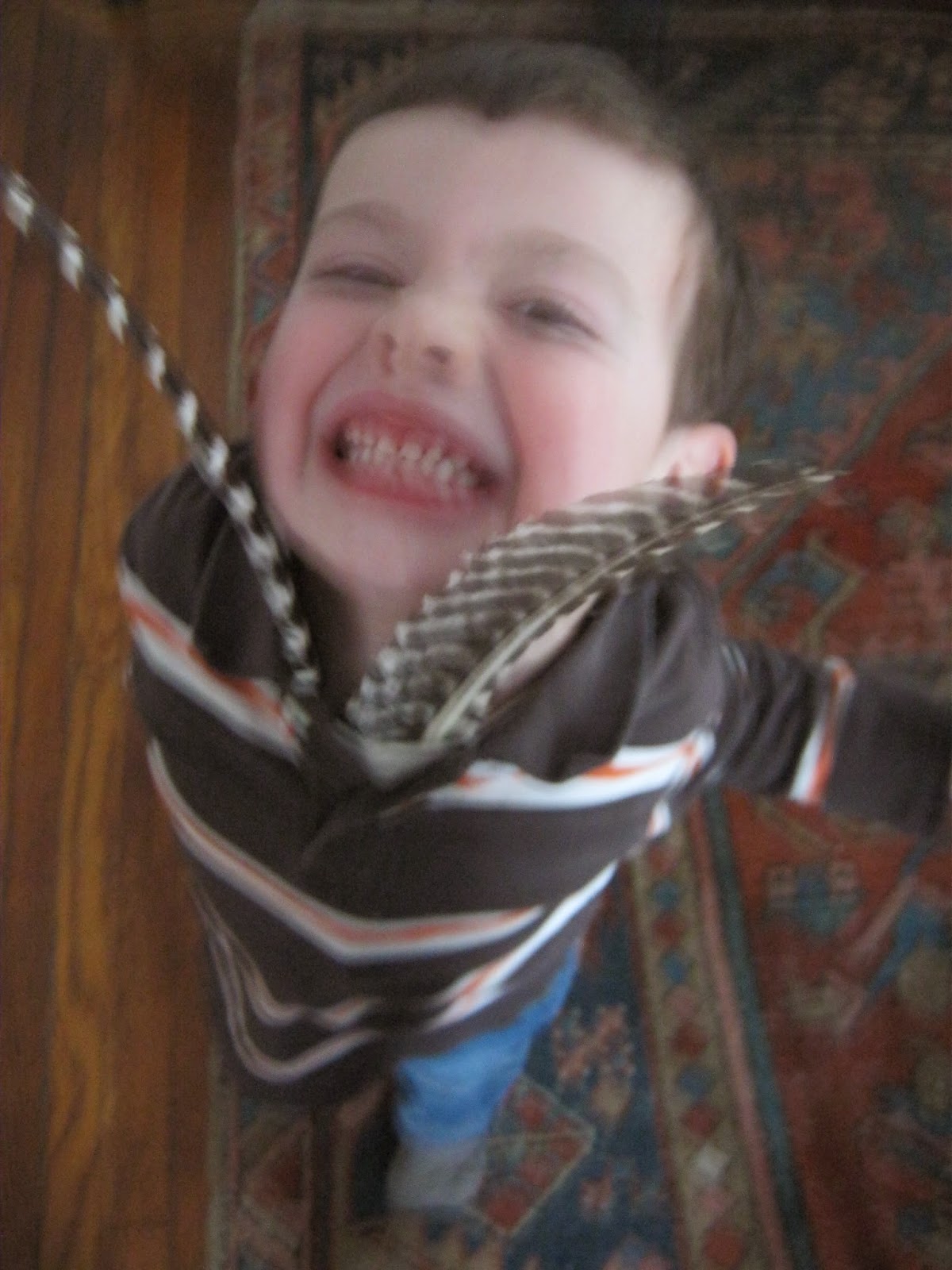