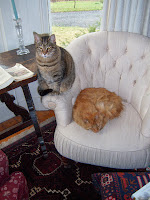 Yes, we have a large family. And the cats are pissed that the dogs were introduced before them. Then again, they're always a little pissed, so I guess it didn't do any harm. Anyway, this is Pitty Pet and James. James is the ball of orange fluff, and Pitty Pet is the massively obese cat on the arm of the chair.
Pitty Pet will claw you if you dare suggest his name is undignified. He was named by A.'s elderly grandmother, who cared for him like an infant. When she was alive, she used to tuck Pitty Pet into bed with her at night, pulling the covers up under his chin and making sure he had his very own hot water bottle. Pitty's life has been pretty much downhill ever since then. Now he spends his time skulking around, looking for food and the warmest place to take a nap. Much like me, as a matter of fact.
Pitty is also A.'s extra-special friend. A. doesn't like it when I point out how disgustingly fat Pitty is, holy Lord. Once Pitty jumps on A.'s lap, A. won't get up for anything other than the direst emergency (like getting another beer) and then he apologizes profusely to the cat for the disturbance. I do not share his guilt about disturbing the cat, however, and spend most of the winter booting Pitty off my chair by the woodstove.
James is the new addition to the cattery. The MiL took him from her mother's barn when he was a kitten. He still behaves like a barn cat, too. He jumps on counters looking for food, eats anything that comes his way, and hunts outside all night long. He is also apparently the product of some Deliverance-type inbreeding, since he has an extra toe on each foot. He is very affectionate, however, which means he likes to lick if you're petting him. There are few things more unappealing than the texture of a cat's tongue, though, which is why I don't pet James much. Also, his fur is pretty long, and he gets dreds in it sometimes. Then he yanks them out when he's grooming, leaving hanks of fur on every seat. Charming.
Pitty Pet loathed James in the beginning. And then, we had James, uh, "fixed," and Pitty took to James like a long-lost brother. They play now, and in winter, they share the chair by the fire, which is cute until I want to sit there and find it totally covered with clumps of cat hair.
So there you have it--Pitty Pet and James, the dynamic duo. Next up: the lovebirds.

Wish You Were Here 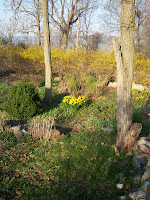 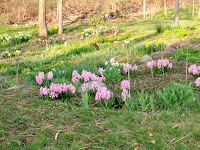 I don't really feel like making any clever comments about these photos. I love the spring flowers here. I wish you could inhale the fabulous perfume of the magnolias and wander our garden paths with me to see all the astounding beauty of spring in upstate New York.

Happy Spring.
Posted by Kristin @ Going Country at 6:20 AM 2 comments:

Exciting news! We decided to have our (very old, totally ridiculous) water system overhauled. Henry the Plumber showed up yesterday to begin the serious work and, of course, disconnected the water. He promised that before he left he would reconnect at least the kitchen and downstairs bathroom so we could have water overnight. Can you see where this is going?

Henry was still working on that when it was time for me to start dinner. At first I thought "Eh, I don't need water to make dinner," which is why when A. called and asked if he should pick something up on the way home, I said no. Clearly, I was hitting the gin and tonic a little too early.

Further proof that the gin and tonic had affected my judgment: I decided to make something that requires raw sausage. It is generally acknowledged that washing one's hands after playing with raw pork is a Good Thing. But, no water in the house.

Now, if we lived in a city, we'd be pretty well screwed at this point. Of course, if we lived in a city, we'd probably have water. But I digress. ANYWAY, one benefit of living in a house built before any kind of modern conveniences is the ability to function when the modern systems fail. So we have no less than 3 sources of water. There's a stream that (sometimes) runs along the edge of the property, the old barn cisterns out back (don't worry; I didn't know what a cistern was until I moved here either--there's no shame in looking it up), and a huge lake about 200 yards from the house.

I went with the cistern because 1) It's the closest and 2) I don't have to get my feet wet to get to the water. First, I needed a bucket. After rejecting a filthy bucket that had clearly been used to haul around potting soil, I decided I'd better break out my special House Bucket. The House Bucket is the one I try to keep sacred for household chores, because any bucket just left about will be used for sheep mineral, or corn, or dirt, or any other variety of nasty thing that I don't want in my water.

So, House Bucket secured. Now I needed rope to lower the House Bucket into the cistern. But A. keeps taking all the rope to tie down the scrap metal in his truck, so all the rope is in A.'s truck, and A.'s truck is with him at work. I finally found a length of clothesline in the shed and lowered the bucket. But plastic buckets float on the water. Of course they do, Kristin, you moron. Next, search out a stick to poke the bucket down into the water to fill. Then haul full bucket up, bring into house, heat water on stove, pour into one bowl for initial dunking of hands and another bowl for rinsing the soap. And NOW I can handle raw sausage and finally make dinner. Jesus.

And OF COURSE we had no water last night or this morning. A. was halfway through his shower this morning when the pressure gave out, so he had to rinse off with the rest of the (freezing, none-too-clean) bucket of water I had laboriously procured the night before.

Henry should be here any minute (please, God) to keep working on this situation. In the meantime, if you need me, I'll be drawing water with a rope and bucket and dreaming of municipal water.
Posted by Kristin @ Going Country at 6:47 AM 1 comment:

The People Have Spoken

And because I am a benevolent dictator, I will graciously grant the request for me to stop the yammering and just POST PICTURES OF THE LAMBS ALREADY!

Christ, settle down. Here. But Farmgirl Susan does this sort of thing much better (and more frequently) than I do. So next time, just go there for lamb pictures and come here for . . . wha 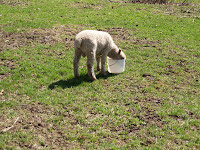 tever it is that I do here. 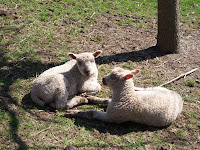 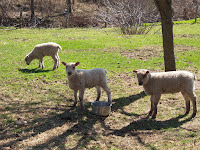 Did you ever look at that page on The New York Times website? It's very entertaining, but I think today I need to lodge a complaint, because they obviously neglected to include a very important person in their birthdays section.

Today is the MiL's birthday. We'll sing later, but first, let's see what other historic events coincide with her glorious day of birth (besides Income Tax Filing Day, which is kind of a buzzkill):

1) In 1912, the Titanic sank. A tragedy of epic proportions, of course, but only made more tragic by the horror of the movie with Leo and Kate. Luckily, the heart will go on.

2) In 1947, Jackie Robinson integrated baseball with his debut with the Brooklyn Dodgers. AND, he didn't have to submit to the indignity of a drug test to do it. It's just so . . . quaint, isn't it?

3) In 1951, Heloise was born. She's been hinting for many years about how slovenly and clueless most housekeepers are. Wouldn't you just love to wander around that smug woman's house and point out HER inadequacies? No? That's just me? Okay, moving on.

4) In 1998, Pol Pot died. This is a cause for celebration almost as great as the event of the MiL's birth. If you don't know who he was, go look him up. Do I have to explain everything?

5) In 2008, Kristin will be cooking prime rib for the very first time tonight for the celebratory dinner. There will be non-family members present if I manage to ruin a $50 chunk of meat, so keep me in your prayers.

Okay, NOW we can sing! 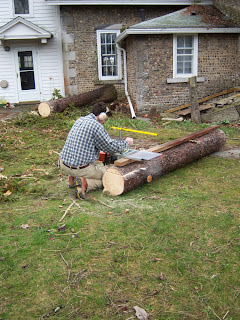 Behold, the power and the majesty of the Alaska Sawmill chainsaw attachment. And its master, A. This thing made some kick-ass planks. It was very cool.

And now, if you'll excuse me, I feel the need to go paint my toenails pink or something. The testosterone stench is making me faintly ill.

Labels: country livin', the A team 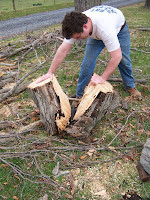 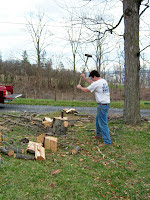 Internet, I would like you to meet my husband, A. Hard-hitting, suave attorney by day, shepherd, lumberjack, and maintenance man by night (and weekends). Every workday, you can find him in his Clark Kent disguise, besuited and bespectacled and ready for a hard day at the desk. But once he leaves that office and hops back into his trusty, rusty Ford pick-up, he morphs into Superman.

This is a man who knows how to wield a splitting maul. It must be a required course at the local high school or something--"Introduction to Manly Activities." None of the men in my family are exactly dainty, but A. is something else. I have never before seen such inherent brute strength in a man. He doesn't bother lifting silly little weights on a bar--that's a waste of time when there are 200-pound chunks of wood to be thrown in the truck. The man is practically a draft horse. He'll tie a rope around his waist and literally haul a 600+ pound steel tractor up a hill and then into his truck bed. True story. It was really impressive. This is a useful kind of man to have around.

He can also build things. Maybe not pretty things, but useful. After single-handedly pulling down the old barn out back, he used most of the wood to build a turkey house and sheep barn. Also by himself, mostly. It's hard to be the lone man around here. Us weak women can only supply him with the food he needs to perform his feats of amazing strength. Luckily, I'm okay with the role of feeder instead of laborer. Though I often get drafted into the assistant position, in which I may be more of a hindrance than a help.

Yup, country boys can do it all. Farmgirl Susan has her Hunky Farmguy Joe. Pioneer Woman has her Marlboro Man. I have my A. Ladies, if you're considering a move to the country, you'd better get you one of these for your ownself. I know I find mine indispensable.