Friday Food: Happy Birthday to Me


Today is my fortieth birthday. Thus far in my forty years, perhaps my greatest accomplishment has been the fact that I've been writing down every single dinner I've cooked for 92 weeks.

Let's continue with Week 93, shall we?

Long version: This was Jack's choice for his birthday meal, but it was two days late because this was when we had time to do it.

I made one cheese pizza, and one with spinach and green onion on it, plus half of that one had bacon and anchovy paste. And I didn't oversalt it this time. Yay me.

The chocolate cake was Great-Great-Grandma Bishop's cake, which I appreciate especially for the fact that the recipe as written makes only one 8-inch cake pan of cake. That's all we need for our family. More than we need, actually. A two-layer cake would be complete overkill.

I figured you needed a picture of the latest Ugly Cake. 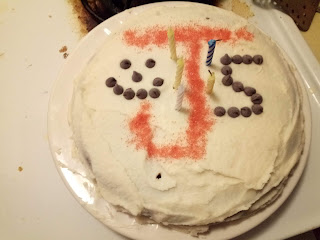 I was kind of amazed that Jack identified the 5 on his cake while I was putting the chocolate chips on. That was quite a feat given that he's just recently learned his numbers and that is a really whacked-out 5.

Long version: I had been planning on making something a bit more involved, but it ended up being a very busy day with animals and outdoor things and I didn't get in the kitchen to make dinner until almost 5 p.m. I had already trimmed and sliced the elk, so I just cooked it quickly with some random spices. Nothing exciting, but everyone was fed in a timely fashion, so yay me.

Long version: Diced elk, leftover rice, cheese, salsa, and Mexican spices. And this time, the very exciting addition of some frozen corn I bought for the children. Ever the indulgent mother, that's me.

Long version: We went to the Big Town this day and I bought some pork chops for dinner, knowing I would be tired and would want something quick-cooking. And also maybe to have a break from trimming elk meat.

Then the pork chops somehow got left at the store. We weren't going to be driving 180 more miles to retrieve six pork chops, so it was on to Plan B, which I did not actually have planned. Serious bummer.

There was a big bag of thawed but untrimmed elk in the refrigerator waiting on A. to make jerky, so I trimmed some of that and seared it with salt, pepper, garlic powder, and paprika. It was okay. As was the rest of this very hasty meal.

Long version: A. made jerky this day, and with the meat he trimmed while he was cutting the elk for jerky, he made some elk with chili. It was just elk, garlic, salt, and red chili paste. After it had cooked down, though, it was too salty. So I added some diced potatoes to it, along with some more water, and cooked that until the potatoes were cooked and had absorbed all the liquid and excess salt.

It turned out pretty well, though I did add some sour cream to the kids' bowls to tone down the chili a little bit.

Long version: Tamales are a very traditional Christmas meal in New Mexico. I love tamales, but they're always too spicy for me. So I figured I would make my own, exactly the way I want them. I found the corn husks in the tiny grocery store ten miles away.

The filling I made from beef rib meat and our own roasted green chilis, chili powder, cumin, salt, and a lot of paprika. The beef ribs don't fall apart like a pork shoulder or something would, so I put all of it in the food processor for a minute to get properly shreddy.

I used these instructions for the masa part of the tamales and the assembly. If you look at that, you will see why tamales taste so good: fat. The masa is almost four cups of corn flour and a cup and a quarter of fat. I used a combination of beef tallow that had rendered out of the ribs, and sheep tallow that we've had around since last spring.

Not to congratulate myself too gratuitously, but they were SO GOOD. They are most certainly time-intensive and somewhat tricky, but definitely worth it for a special occasion. I feel a tradition being born. 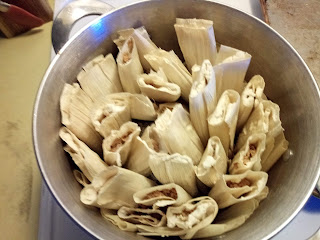 Tamale bouquet in a pot.

I also made a chocolate roulade, which is a thin, flourless chocolate cake rolled around whipped cream. This is not a cake I would make on a regular basis. There's a pot on the stove for a ganache, severely beaten egg whites to lighten the ganache, baking the cake, cooking the cake, whipping the cream, rolling the whole cake around the whipped cream, and sifting cocoa powder and powdered sugar.

It's a process. But it is also worth it. This cake is fabulous, and worth it every once in awhile. Like the tamales.

Long version: When we were at the FFA Christmas dinner/program, the elderly gentleman who owns the mechanic's garage we bring our cars to stood up to let everyone know he had a truck parked in the lot with boxes of potatoes for anyone who wanted them. I don't know why he had the potatoes--he also donates pumpkins to every child at the school every Halloween, so he must have some connection to a farm--but we certainly took advantage.

We got three boxes of potatoes. They're Idaho potatoes, and they're HUUUUGE. 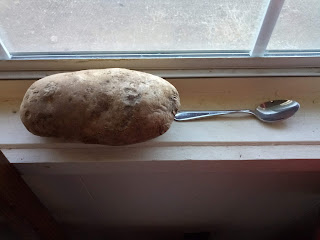 Obviously, I have a lot of potatoes to use. I only needed to peel and dice two of those potatoes to make enough roasted potatoes for all six of us.

The MiL one time, after laboriously peeling all the tiny potatoes left from our potato harvest, drolly proclaimed that a bunch of tiny potatoes ought to be called "an irritation of potatoes." She would appreciate these potatoes. I do.


As is always the case on Christmas day, we had a merry day, but I am now beat and will throw some pictures and captions your way rather than trying to form a coherent narrative. 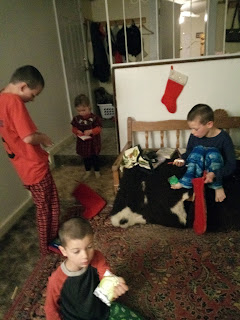 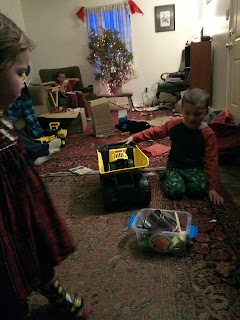 A brisk walk/ride in the early morning before it got windy. 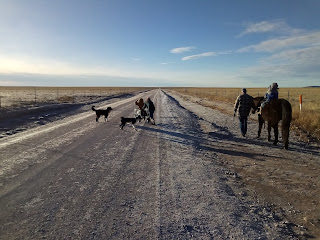 Four children, two dogs, and a horse. What a circus. But good lighting.

And tamale making with helpers. 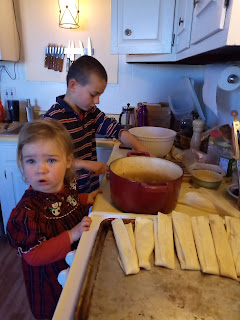 Which is why it took me like an hour to assemble 26 tamales, but whatever. Family bonding is the name of the Christmas game.

I hope your Christmas was merry as well, whatever that looks like for you.

The Children Are Nestled All Snug in Their Beds


And the Christmas Shrub has come into its own: 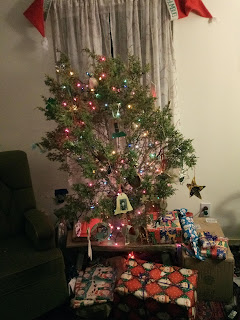 It may be a shrub, but it has plenty of room underneath for presents. And isn't that all that really matters?


It's the eve of Christmas Eve Eve! Are you all ready? Do you have all your cookies decorated and delivered? Your dozens of gifts all wrapped in coordinating paper? Your three Christmas trees decorated according to their respective themes and color palettes?

Of course you don't. Only Instagram does, and that is not real life.

I don't know about you, but in my real life, we didn't even have a Christmas tree until Friday, and it . . . isn't an Instagram tree.

I will explain. With photos.

Last year we cut our tree at Wally's ranch, since we happened to be there at about the right time while we were out cutting firewood. It was a pinyon, which is a nice shape for a Christmas tree. They tend to be somewhat small, but I actually prefer smaller trees--fewer strands of lights and ornaments needed--so it was fine.

This year, however, we thought it'd be kind of weird to randomly show up at Wally's now that A. isn't working on his house anymore, so we thought we'd ask our neighbor if we could cut one near his canyon. I always feel somewhat awkward asking for things like that, although our neighbor quite obviously did not care in the least. I know that because when I asked him, he said, "Sure. I don't care."

We didn't get to it until after school was out for the break, though, so we went on Friday.

First we had to climb over the gate, because the one we usually go through was locked. 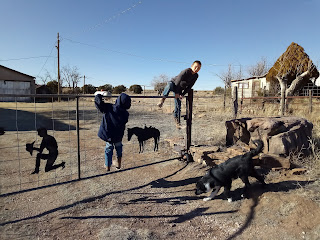 This made it seem a bit illicit, so I was glad I had gotten explicit permission.

It was a beautiful day, very sunny, though it had been quite cold the night before. This meant that the stock tank near the road had a very satisfying layer of ice on it. 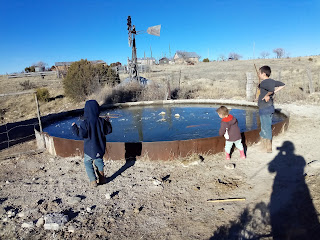 Who needs a fancy Christmas tree farm with sleigh rides and cocoa when you have a frozen stock tank to whack with sticks?

I left the family there and took my bodyguards with me for a tree-scouting sortie. 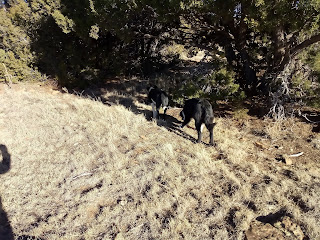 Not that they would be much help if there were a mountain lion, but at least they'd bark.

Unfortunately, we weren't far enough down to find the pinyons. The trees all around us were only cedars, which grow much more bushy than I would have liked. However, beggars can't be choosers, so I found the most tree-shaped shrub I could and had Cubby cut it down.

Then he and Charlie carried it back to the stock tank, where A. set it in the water while the children played some more. 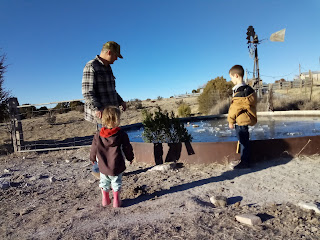 The boys started climbing a large cedar behind us, so Poppy and I spent some time bonding with Odin. 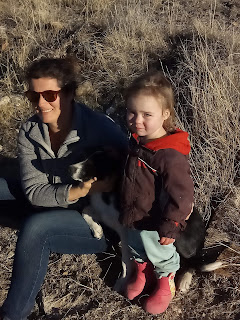 Then we brought our shrub home, set it up, and decorated it. I did this by wrapping two strings of lights around it and handing off the box of non-breakable ornaments to the children. This mostly consists of all the ornaments they've made at school over the past several years. So they actually did all the decorating. 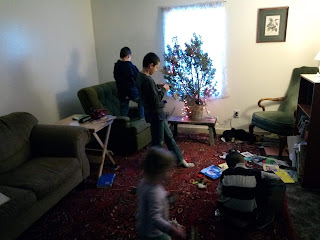 As you can see, our Christmas tree is more like a Christmas shrub. It does, however, have a very nice Christmas tree scent, and as the children were decorating it, Charlie stood back and said, "Now our tree is starting to look merry." So I guess they don't remember or care what our big, northern-grown Christmas trees used to look like.

Pretty sure all they care about is that there are lights on the thing and some presents under it come December 25th. And that, we can manage.