The Thing About Charlie

Charlie is not a good sleeper.  He doesn't take long naps during the day--usually only about 45 minutes.  He definitely doesn't sleep anywhere close to through the night, instead waking up about every two hours.  And it can sometimes take me an hour to get him back to sleep after he wakes up in the night.

Also, goddamn does that kid hate the car.  He will scream for half an hour straight in the car.

But Charlie's saving grace--the thing that makes me forget that I feel like shit every morning and that driving anywhere makes my nerves stretch tighter than Cher's face--is that he is charming.  Oh my, is Charlie ever charming.

He laughs when I tickle his ribs or noisily kiss his cheeks.  He kicks and squirms so happily on the sheepskin in front of the fire, eating his fists and just enjoying the hell out of his life.

And he smiles.  He smiles all the time, at everyone.  He even smiles at his brother, which is nothing short of saintly considering the marks he bears on his head* as a testament to his brother's not-always-gentle treatment of small things.

Someday he'll sleep better and ride in the car without hysterics.  But I hope he'll still always be smiling.  Always. 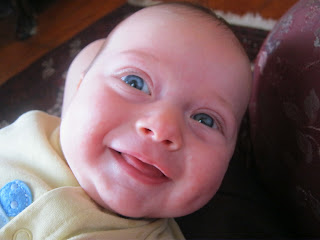 Like this, only not with the chubby cheeks of a three-month-old.  More's the pity.

Bring On the Liquor

It's Alcohol (Almost) Friday, duckies!  And that means it's time for a detailed look at the fun new cocktails created by the Blackrock mixologists.

We like to call ourselves mixologists now.  It sounds so much better than drinkers.

So!  The first one is not one we actually made up ourselves.  A. found it somewhere online and promptly forgot both the name of the drink and where he found it.  I did a very quick search in a half-assed attempt to credit the original source, but couldn't find it by searching for the ingredients in Google.  So no credit.  If it's yours, feel free to let me know.

It's the most bizarre-sounding combination of liquors ever.  You ready?  Okay.  One shot of gin, half a shot of dry vermouth, half a shot of peach brandy (I KNOW), juice from about a quarter of a lemon.  And some water for me, because I always water my drinks.

I do not know why the hell we have peach brandy of all things in our liquor cabinet, but we do.  It's quite strongly peach-y flavored, and very sweet--basically a liqueur--so you can really taste the peach.  It's good. It also makes one hell of a strong drink in combination with the gin and the vermouth.  You've been warned.

The second one I just made up tonight.  I started out making an original daiquiri, which is supposed to be light rum, lime juice, and simple syrup.  Except we didn't have light rum.  Our current rum is Pusser's Rum, which is the grossest name for a liquor ever and also apparently the Original Navy Rum.

So Pusser's Rum.  Right.  Then juice from half a lime.  And then, since I was too lazy to make an actual simple syrup, I used some of the juice from an open jar of pears in the refrigerator.  I can pears with a medium sugar syrup, so it works pretty well as a substitute for simple syrup.  And then, because I always water my drinks and I was feeling frisky (not really), I topped it off with a little seltzer.

To recap for those of you playing along at home: A shot of rum, juice from half a lime, pear syrup juice to taste, and seltzer.

If you read the history to Pusser's Rum that I linked to up there (and you really, really should--it's funny), you saw that the daily naval ration of rum was called a tot.  And so I think I really must call this drink Tot Juice.  You know, for all the mothers out there making it after the children are nestled all snug in their beds.  Although it's entirely possible I'm the only one doing that, what with the fact that it calls for pear syrup and that is not an ingredient found in most people's liquor cabinets.

But if you DO happen to have some pear syrup around, you should try it.

In Which I Once Again Display Our Woodchuckiness to the World

Hello, poppets!  And a very happy Halloween to you!  Halloween is definitely a holiday for children.  And now I am the proud possessor of two of those, which means I must actually do something for Halloween.  Specifically, costumes.

I really, really suck at costumes.  It's part of my non-craftiness.  Luckily for me, the man I married is quite crafty, in his own unique way.  And so A. is the reason Cubby had a costume this year.  All I had to add to the coonskin cap was suitable mountain man attire.  So . . . how about OshKosh B'gosh  pants and some L.L. Bean hiking boots?  Sounds like a pretend mountain man to me!

In an effort to amp up the mountain man likeness, I did safety-pin some scraps of raccoon fur above Cubby's boots.  So it looks like fur boots, right?  RIGHT? 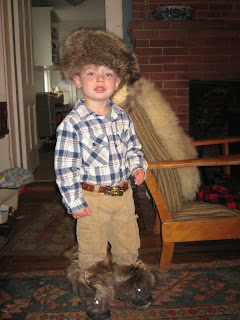 Just yesterday in the mail, Charlie received some gifts from my aunt and uncle that included a little pajama suit that looks like a bear.  A mountain man and a bear?  Makes sense to me.  Although, A. did point out that mountain men and bears don't exactly get along.  His exact words were, "You know what mountain men do to bears, don't you?"

Yeah.  Sorry, Charlie.  But it is kind of representative of the brothers' relationship thus far: the hunter and the hunted.

I'm trying to avoid the whole trick or treating thing for as long as possible--more specifically, the hyped-up child sick from trick or treating candy--but luckily for me, Halloween is on a Wednesday this year.  And Wednesdays mean story hour*.  So Mountain Man Cubby, Charlie Bear, and I went to the Halloween story hour to display our costumes**.

There were about a dozen children present, all in costume.  And every. single. child. was in some kind of purchased, adorable animal costume.  Or a princess.  Or Elmo.  And then here we come, with Cubby sporting half a dead raccoon on his head and wrapped in skins.

Oh yes.  It was just like that.  I am That Weird Mom with Those Weird Kids.

I even got a picture. 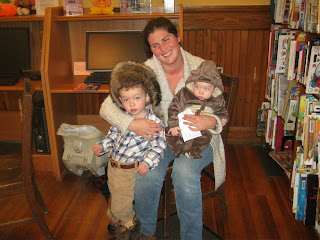 Okay, so far only Cubby is the Weird Kid.  But Charlie's time will come, I have no doubt.

Cubby's hat actually got many admiring comments (the mothers who didn't comment were no doubt being polite while attempting to hide their horror) and he had a very good time at the Halloween story hour.  So we'll call it a success.

I don't know how I'm going to top this costume next year, though.

* Which I still managed to remember, even though I have not yet put it in my handy dandy appointment calendar.

** I considered not changing out of my regular house attire--nasty old fleece smelling of baby spit-up, dirty jeans, and slippers--and calling myself a Harried Housewife, but pride won out and I stuck with my usual Harried Housewife Making a Half-Assed Effort.
Posted by Kristin @ Going Country at 10:17 AM 5 comments:

Labels: all about me, Charlie, Cubby, family, randomness

After a day spent indoors because of the build-up crappy weather to Tropical Storm Sandy, Cubby was getting a little stir-crazy.

He wasn't the only one.

When A. went out around 6 p.m. to put the chickens away, Cubby begged and begged to go too.  So I thought, okay, we'll just go on the front porch where he can experience the awful wind and rain for himself.  Then he won't be so keen to be outside.

So we went on the front porch to watch the huge trees on our front lawn bend in the terrible wind and to get sprayed with the rain that wind was blowing onto the porch.  And Cubby spent the next ten minutes running back and forth on the front porch in wild excitement while keeping up the following commentary: "I like the rain!  It makes me happy!  I like the wind!  It's blowing my clothes!  This is FUN!!!!!"

Alrighty then.  Perhaps a hobby of storm chasing is in his future.

P.S.  For those of you who were wondering, we sustained no major damage here at Blackrock and only lost power for a few hours, starting around 8 p.m. last night.  There are a lot of people who were definitely not so lucky.
Posted by Kristin @ Going Country at 5:38 AM 5 comments:

I Am the Mother of Boys

I had the unusual opportunity to talk to my brother the other day.  Unusual because both of us have three-month-old babies plus toddlers.  He has two girls.  I heard them both in the background when I called him and asked if he was busy.  No, he said.  We're having a tea party, he said.  And what are you doing, he asked.

We had just been fishing at the dock and Cubby was out on the patio with A. gutting the fish.

Yesterday in the car, the drive home from the Small City was enlivened by a continuing soundtrack of growling, roaring, and "pshew pshew" shooting sounds from the back seat as Cubby menaced his younger brother from afar.  I covered my face with my hands at the auditory evidence of excess testosterone in the back seat.  A. looked at me, shrugged, and said, "You're the mother of boys."

We Went to a Pumpkin Patch

And no, I did not bring a camera to document my child running excitedly through a corn maze or hugging an enormous pumpkin.  Because I am obviously a failure as a mommy blogger.  Not that it would have mattered if I had had my camera, because Cubby did neither of those things, instead preferring to run over and over again to the tractor that we forbade him to climb on and attempt to start.

We thought that maybe wouldn't have been so popular with the couple running the place, to see a two-year-old driving their tractor.

He's never made pumpkin pie before, but since any idiot can follow a recipe, and A. is most certainly not an idiot, he used the Joy of Cooking recipe for the filling.  The MiL helped him make a crust for it using almond flour, so there wouldn't be any evil gluten lurking in his beloved pie.  And there it was: a pumpkin pie, courtesy of A.

You just never do know what that man will do next.
Posted by Kristin @ Going Country at 10:10 AM 5 comments: