Ever since Charlie was a wee thing, he's had issues with his scalp. Gross, dry, scaly issues that never really go away. I guess it's just a variation on cradle cap, but it sure is persistent. I never wash it with shampoo, for fear of further drying, and in fact before every bath I brush his head vigorously with a soft-bristled brush and then rub in baby oil.

Unfortunately, as his hair has gotten thicker, it has gotten harder for me to really brush his scalp clean of the dry skin and his hair tended to absorb most of the oil. Not only did this mean that his scalp wasn't benefiting from the oil, it also meant that the day after a bath his hair would have a very unpleasant greased look.

Finally, last week, A. suggested that maybe we should buzz his hair off in order to better treat the ever-worsening dry scalp. I am not a fan of the buzz cut look on my sons, and in fact go through quite a bit of hassle to give them actual haircuts with scissors rather than just shaving it all off every month. But I had to reluctantly agree that we had to do something.

Leave it to me, A said. I'll just use my beard trimmer and cut it to the same length as my beard, he said.

Never trust a man with clippers. Obviously, that is not beard-length hair. That's straight-up bald. When A. started with the buzzer (an activity that really did not go over well with Charlie, who was pinned in my lap and obviously felt completely betrayed by both of his parents), he discovered that the hair was too fine for a somewhat long buzz cut. So off it all came.

I am . . . not pleased with the aesthetics of the result. Charlie, however, could not care less. 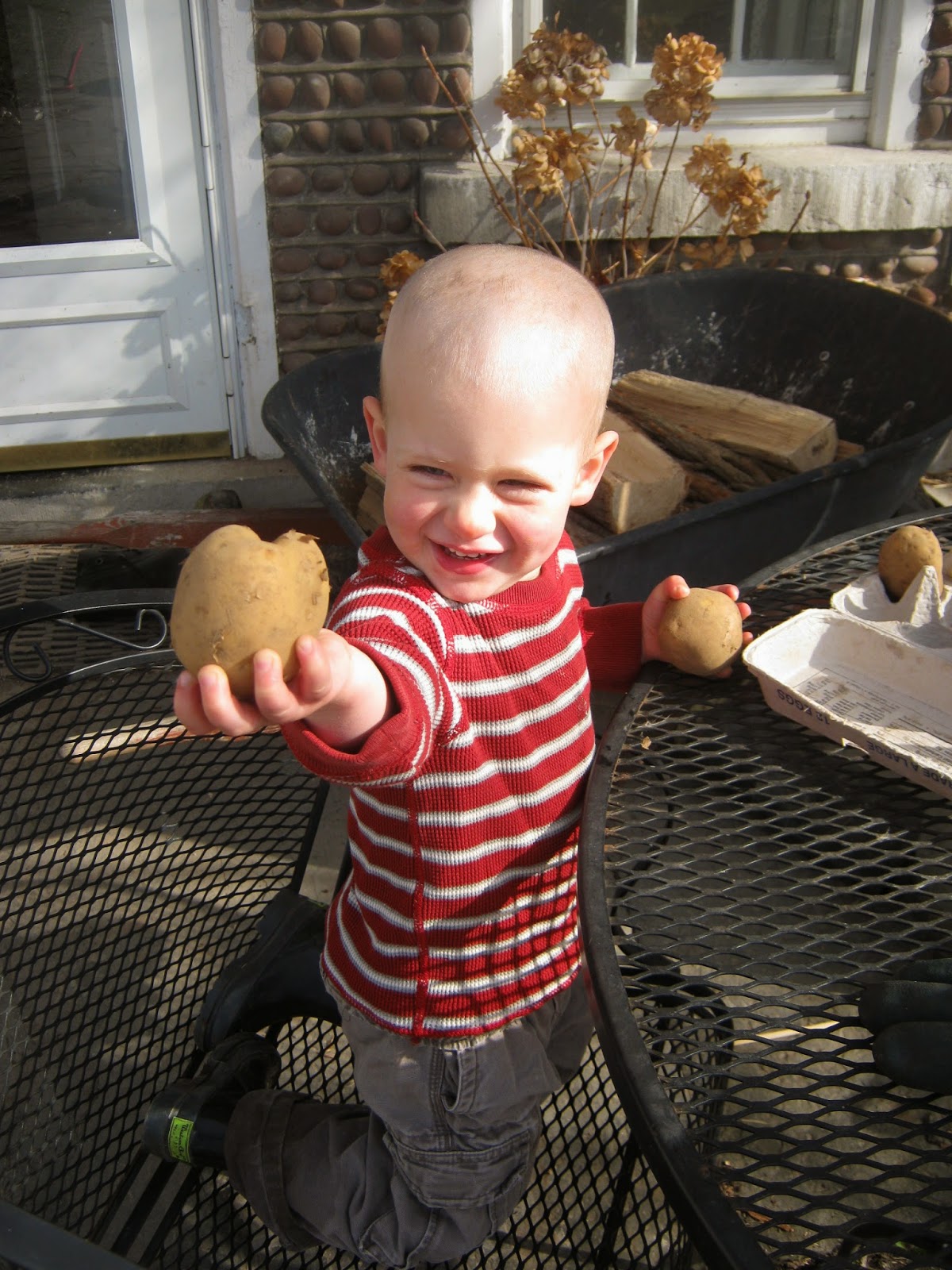 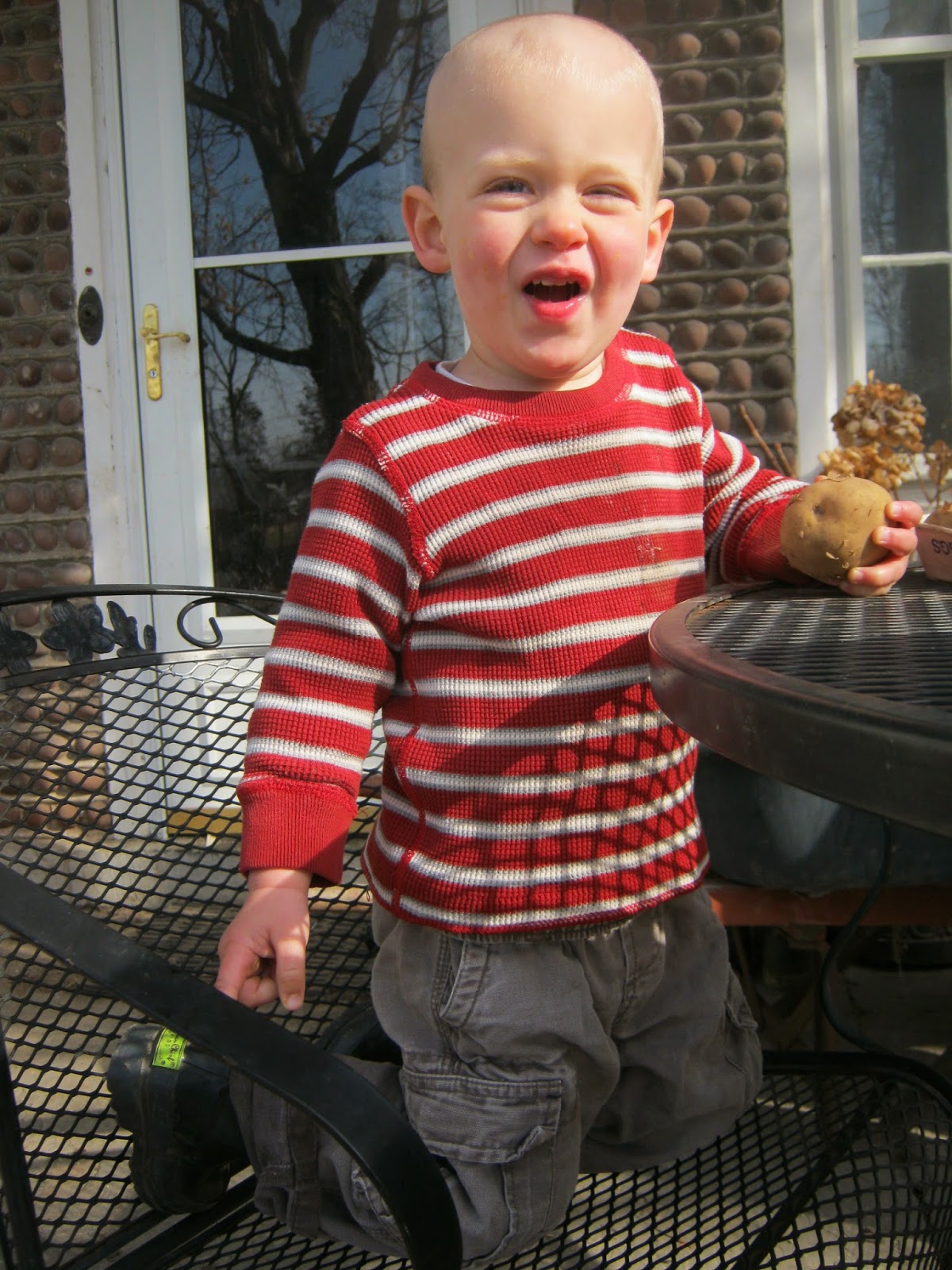 Cubby gets great delight in referring to his little brother as Mr. Bald Head. And I must admit his scalp looks a lot better already.

Even if his head does kind of resemble one of those potatoes.
Posted by Kristin @ Going Country at 5:33 PM 6 comments:

Labels: Charlie, family, the A team

There was a time in my life when I would roll out of bed, put on sweatpants, a robe, and some slippers, and shuffle into my day. Later, after A. left for work, I would either shower and get dressed or put on work clothes and do whatever manual labor was required that day before taking a shower and getting dressed when I finished.

Then I had a baby.

I realized early on that nursing a baby in a robe was really awkward. And that if I didn't get dressed as soon as I got out of bed, there was a likelihood of not getting dressed at all.

Then I had a toddler.

At this phase, I had to be dressed and in clothing that was acceptable for public viewing first thing upon waking up, because if I didn't put acceptable clothing on my body when I got up, there was a likelihood that a potential trip to the library later in the day might be canceled because I was wearing the flannel-lined jeans covered with Great Stuff, in which I could not possibly be seen in public, and going all the way back upstairs to change was too daunting a prospect to face.

(That was a horrible run-on sentence of a paragraph, but I'm letting it stand. Sorry.)

It's really much better to just put on presentable jeans and a fleece first thing. It's certainly no harder than pulling on sweatpants or whatever. Our house is too cold most of the year to wander around in my sleeping clothes anyway, so if I have to put on the extra layers, they might as well be real clothes.

At this stage of my life, I actually put my clothing out for the next day before I go to sleep at night. It's all in a pile on the corner of my dresser: shirt on the bottom, jeans on top of that, long underwear on top of that if it's long underwear season. Socks next to the pile. Slippers on the floor next to the dresser. Any bulky sweater or fleece is hung on the banister right outside our bedroom door.

It's pretty much like a blind person setting up for dressing, which is essentially what I am because more often than not, I get dressed in the dark. I need to make a minimum of noise and disturbance lest I wake the demon/cherubs. I do not want to see their shining faces at 5:30 in the morning, so I dress stealthily and creep downstairs as quietly as possible.

So what about you, my lovelies? What's your morning attire look like?
Posted by Kristin @ Going Country at 4:10 AM 4 comments:

Labels: all about me, Audience Participation Days, confessions, randomness

You know those "Day in the Life" kind of posts where people break down their entire day by time and describe what they did? I love those posts. I even did one once. But it occurs to me that those are so big picture that they miss a lot of the minutia.

What, for instance, did ten minutes of my day after dinner last night look like? So glad you asked!

We begin in the living room. It's the children's last opportunity to trash the joint before bedtime pick-up. They make the most of the chance. 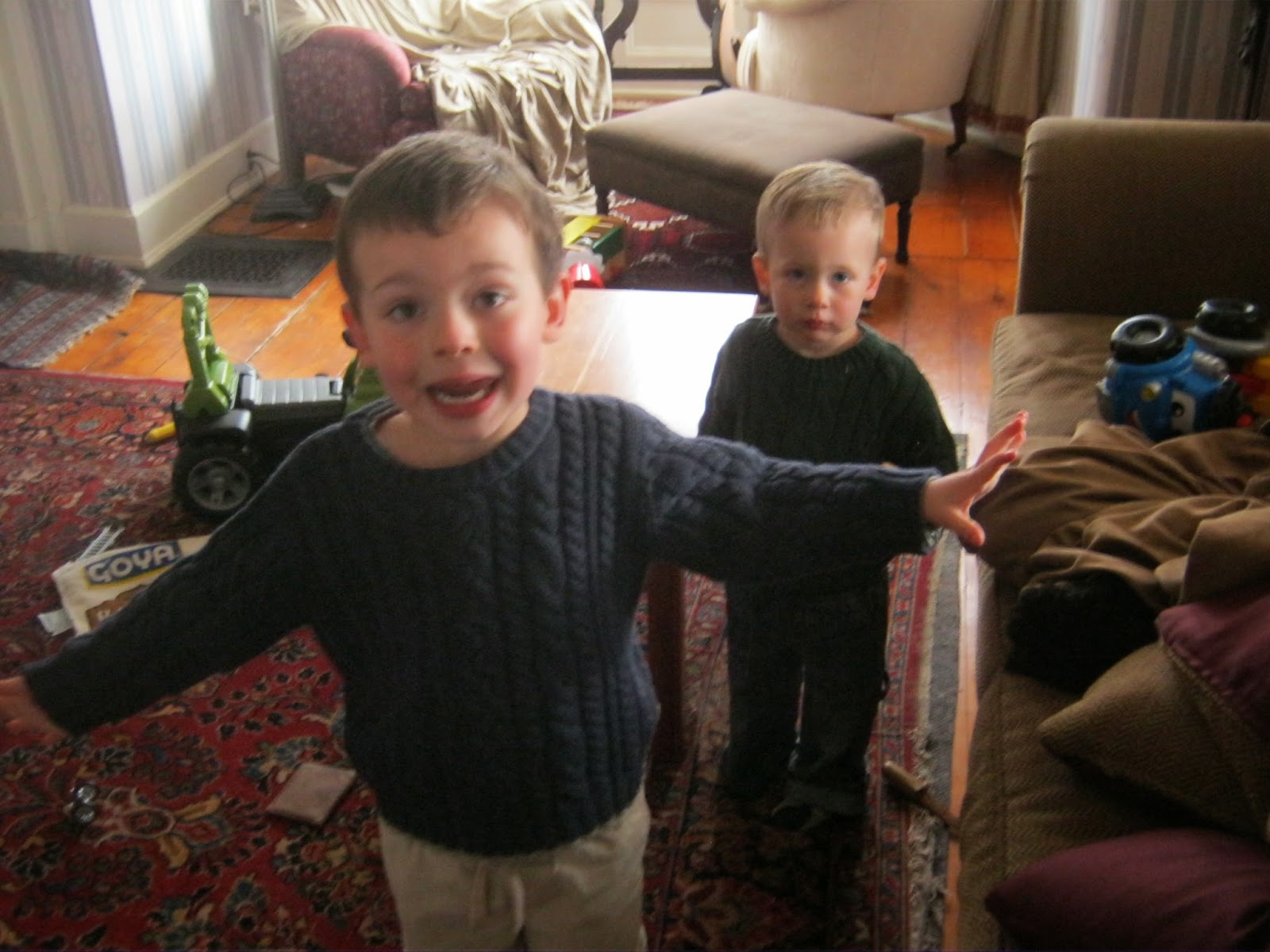 Cubby also took the opportunity to ham it up for the camera, as always.

Charlie managed to extract an apple from the large bag on the floor in the parlor and proceeded to eat it all, despite just eating dinner. He likes to clutch an apple during his wanderings. This wandering took us all into the dining room, where Charlie ended up in rapt contemplation of the Nature Conservancy magazine while Cubby roared at his head. 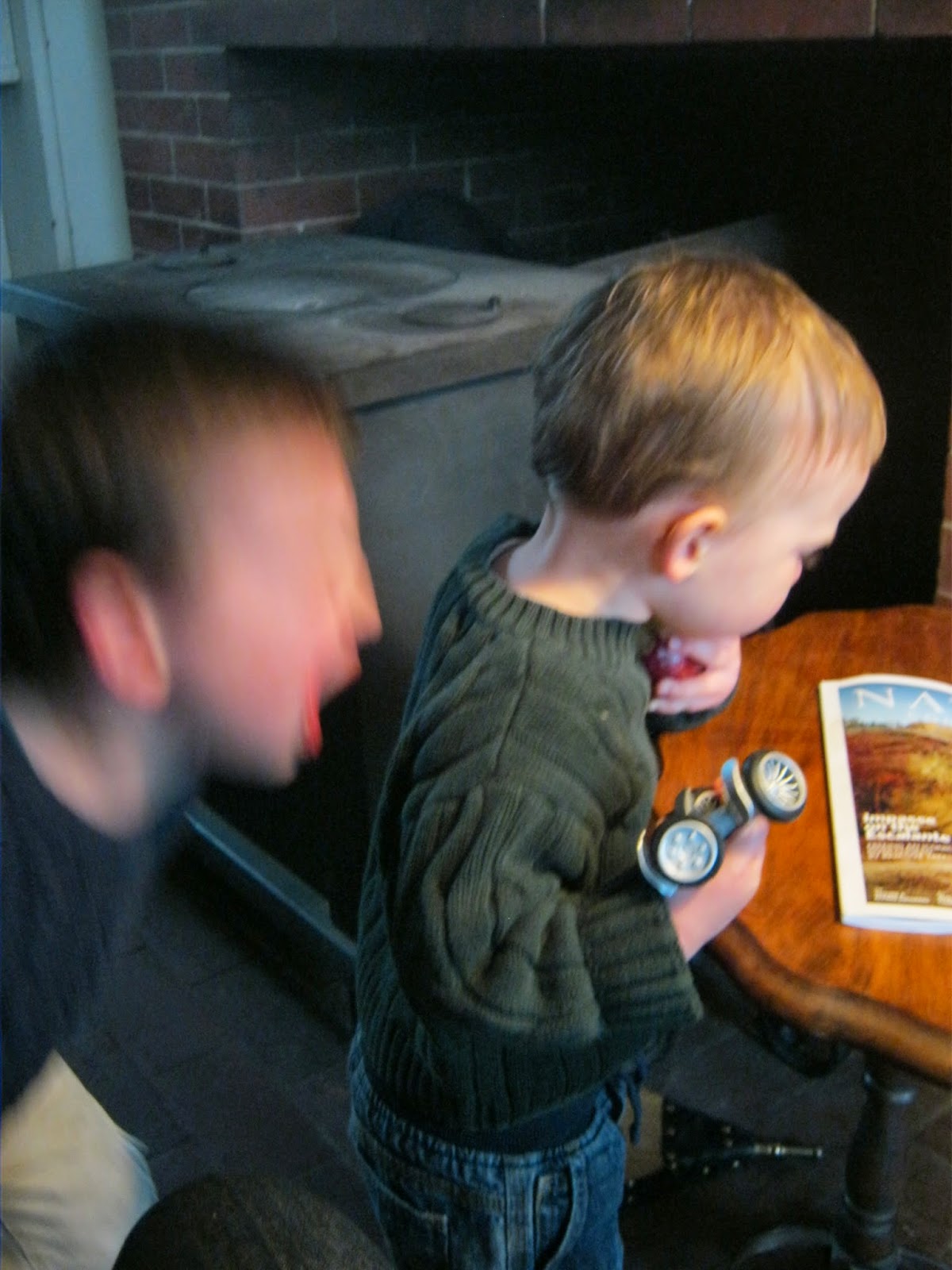 I think Cubby was playing some game involving dragons. Or maybe it was bears. Or maybe he just felt like roaring. Anything's possible.

My children are in constant motion. This is why so many of the photos I take of them are blurry. 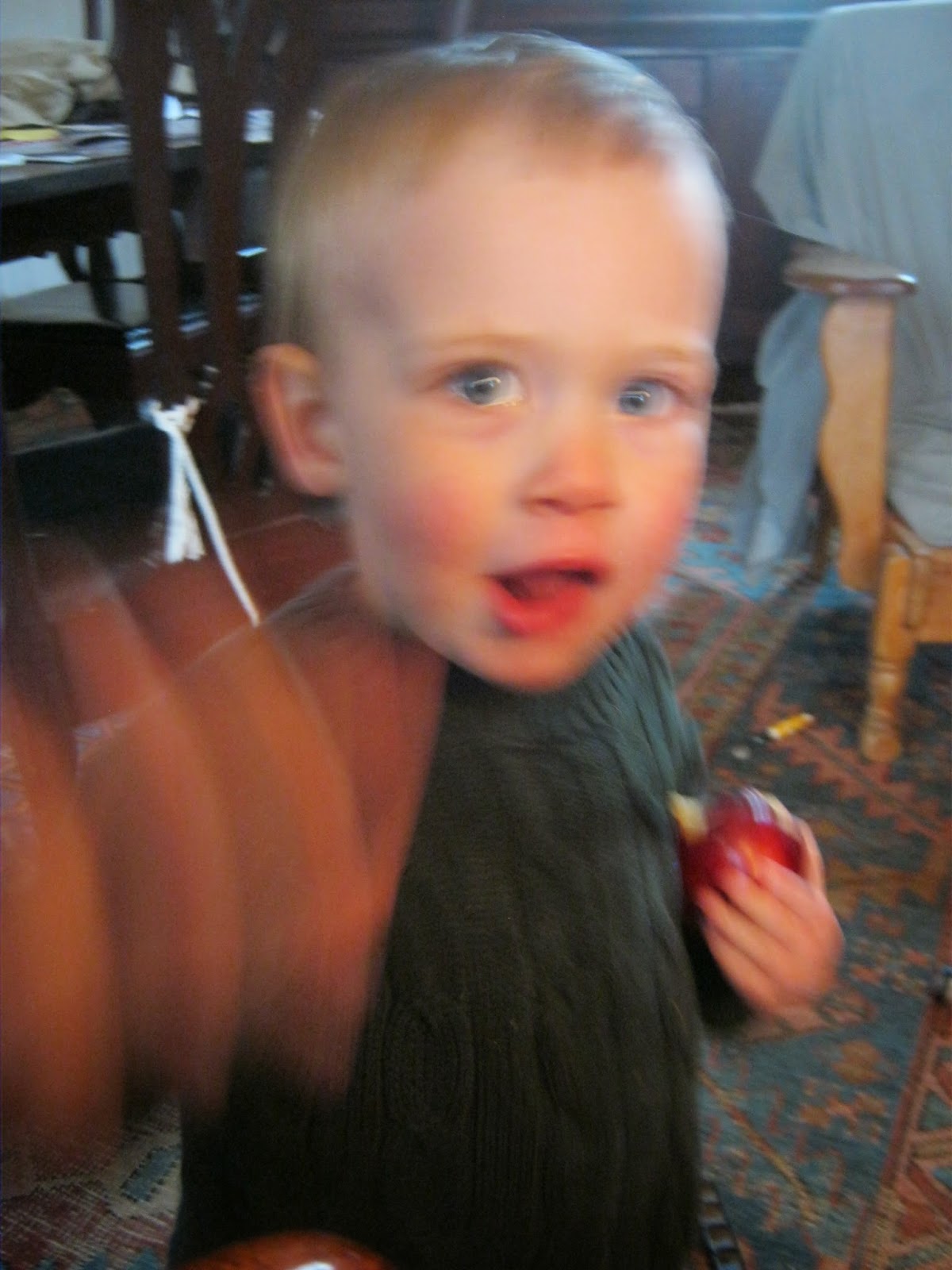 A. was outside during all this excitement. He was scrounging up enough wood to keep the fire going for the night and this morning. 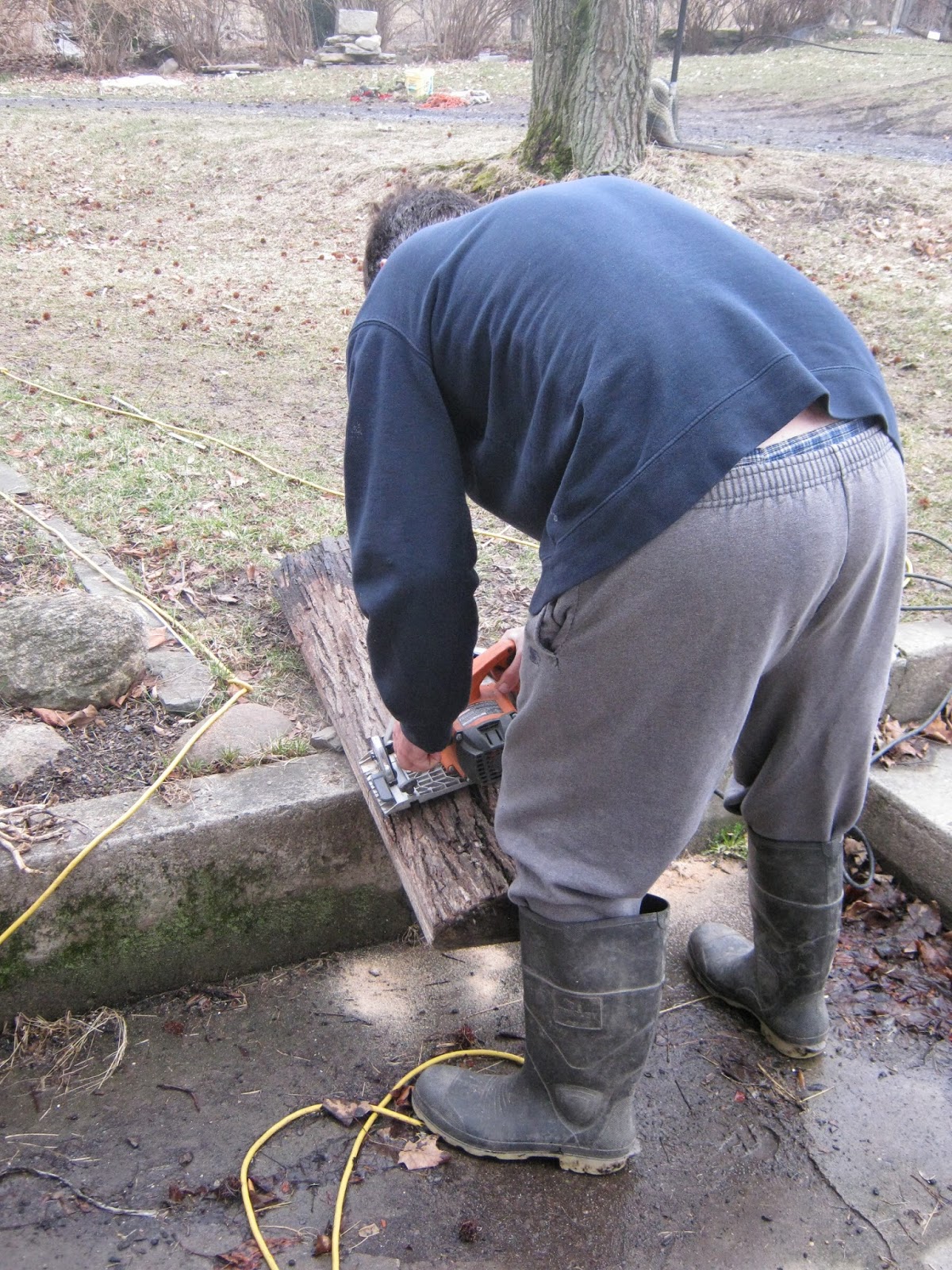 Sweatpants are not approved lumberjack apparel, but then, I don't think lumberjacks use circular saws either.

Charlie wanted to come out, but I denied the greatest desire of his heart, as I so often do. 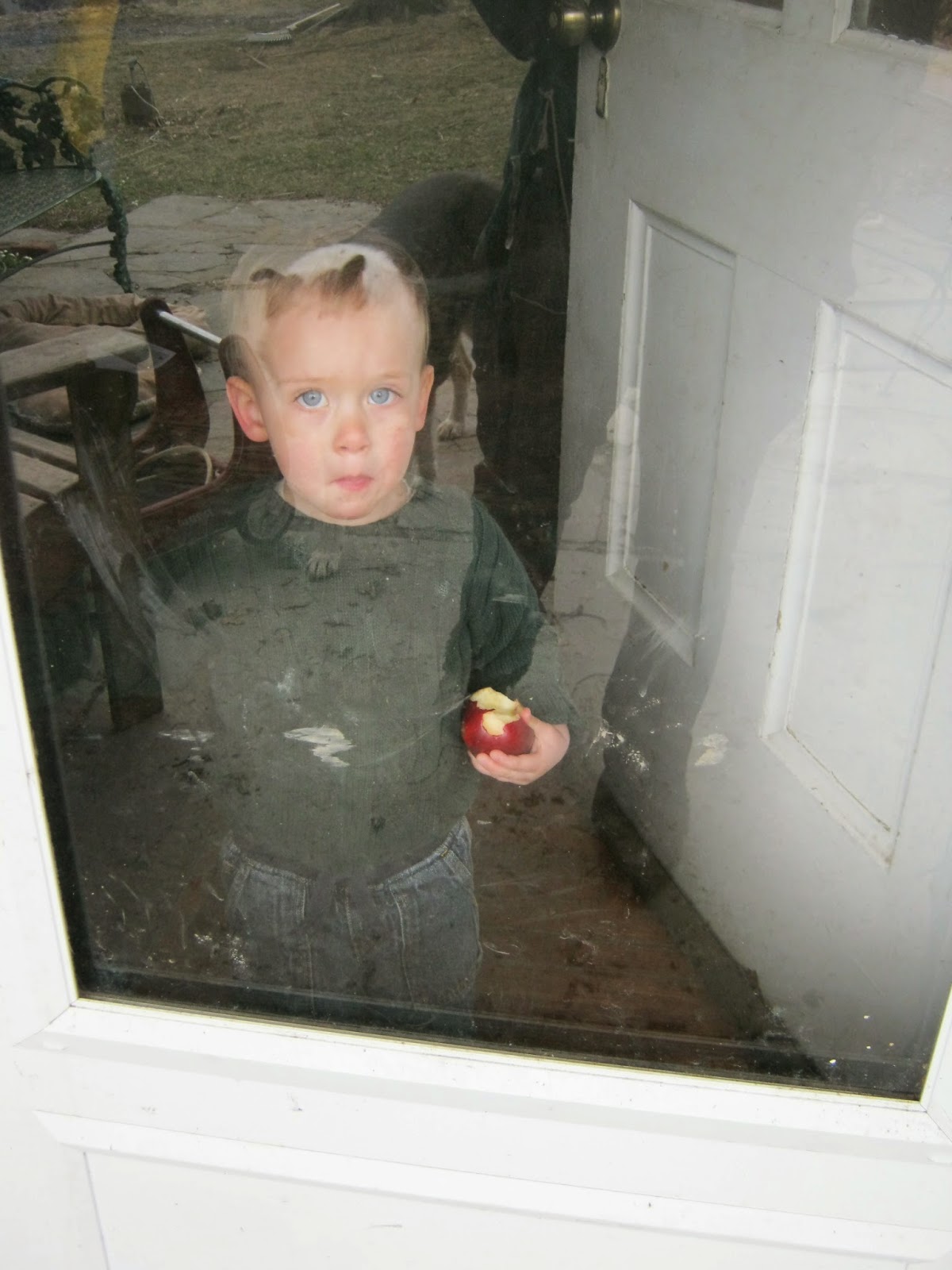 Sad boy with apple. But not blurry!

Otty wanted to come in, but I denied her, too. 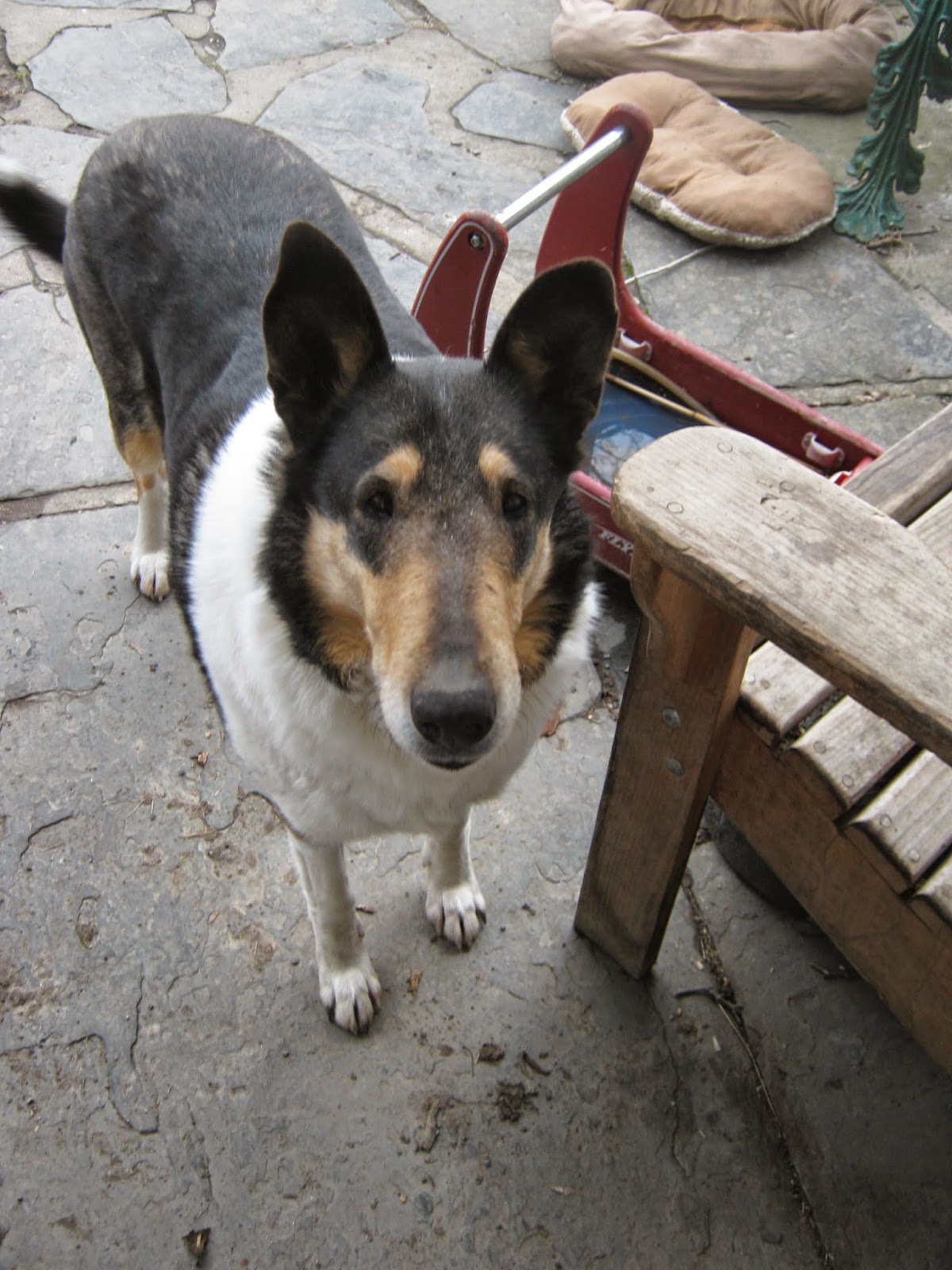 This is the face of a dog who expects there to be many delicious morsels available on the floor under the dinner table.

When I got back inside, I found that Cubby had used his magnetic play set and this roller thing from an unknown piece of furniture to make . . . 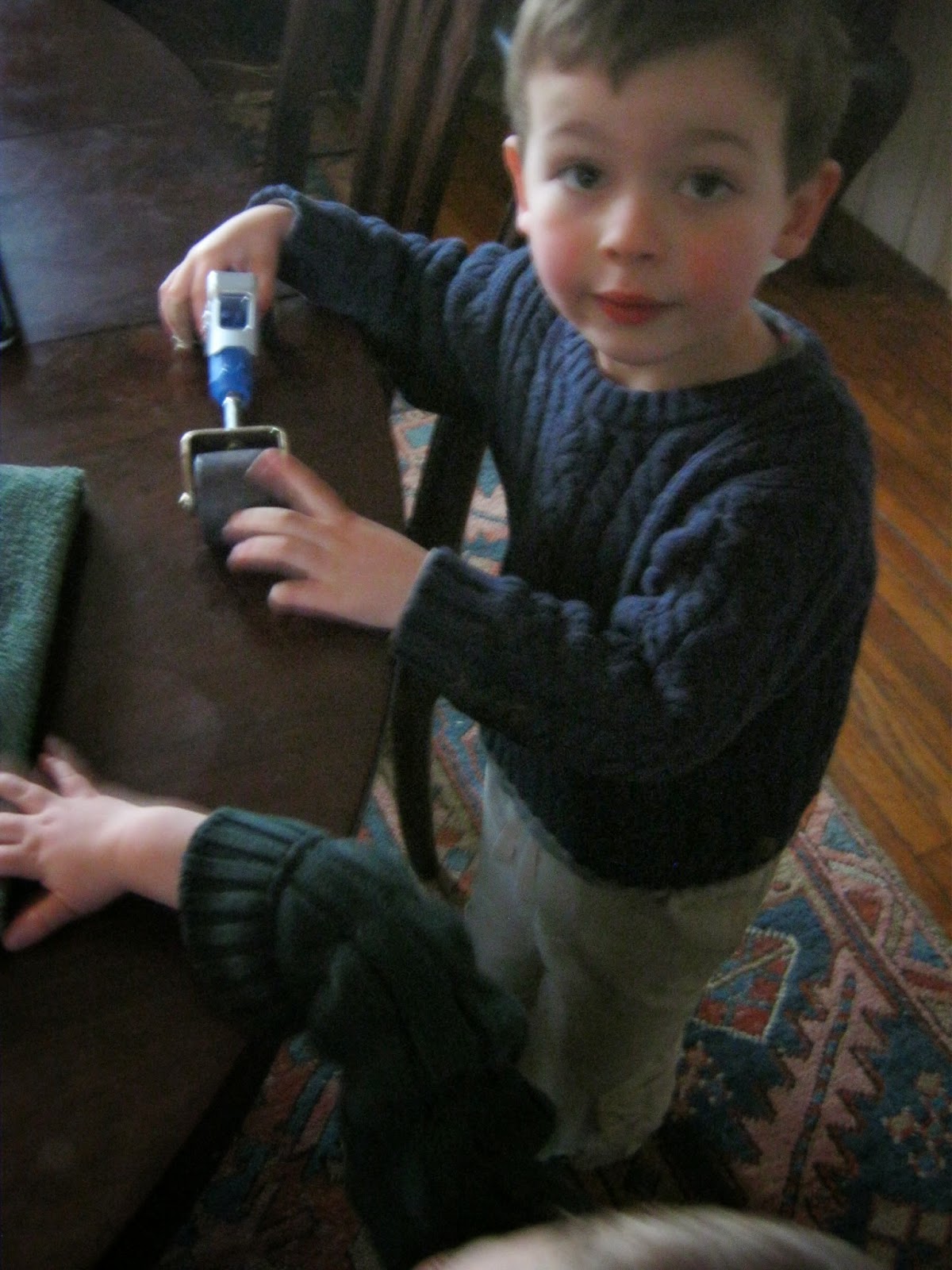 "I have a surprise for you, Mommy! Close your eyes! ONETWOTHREEFOUR . . . it's a roller!"

It did indeed look just like a roller of the sort that is used to smooth out ground during road construction. I duly praised his cleverness. Then I realized Charlie had soiled himself and needed to be changed.

I decided to stop taking pictures at that point. You're welcome.

It was about sixty degrees today with no wind, lots of sun, and general fantastic spring weather all around. So of course I spent most of the day outside, either chasing children, or raking, wheelbarrowing, hauling, and dumping the various kinds of detritus that accumulate over the winter and must be disposed of in the spring.

I sort of forgot that the return of good weather means the return of hard labor and exhaustion by the end of the day. And I haven't even started anything in the vegetable garden yet.

Charlie sure was a happy camper roaming around today, though. That kid will not wear mittens. Will. Not. The scene that ensued the few times I held him down and forced them onto his hands was ugly, to say the least. And then he'd just shake them off immediately, anyway.

This means that for the past two months, every time we've gone outside, his hands would be red and freezing within minutes and he would end up on my hip, usually crying. Or I would force Cubby to go inside so Charlie wouldn't end up with frostbitten fingers, and then they'd both be crying.

So you can see why the warmer weather is a great relief in many ways. Even if I do feel about eighty years old right now. Ow.
Posted by Kristin @ Going Country at 6:03 PM 2 comments: