This week kind of got away from me, what with my crippled back and all. So let me just throw some pictures from Memorial Day weekend your way now, okay? Great.

A. bought a new (family-sized--whee, but not really) tent and decided to set it up on the lawn just to inspect it. 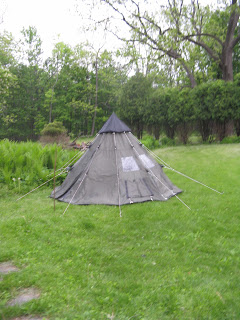 It's teepee-style, which means A. can stand up in it to put his pants on in the morning. An important selling point for him.

And do you think that tent was going to be on our lawn and not have two small boys sleeping in it that night? 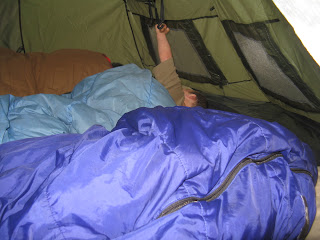 We also spent some time on our beach. 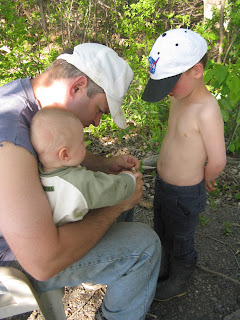 Where A. showed Cubby (and Jack) how the spiles for collecting maple sap used to be made out of hollowed-out sumac twigs. At least, I think it was sumac. 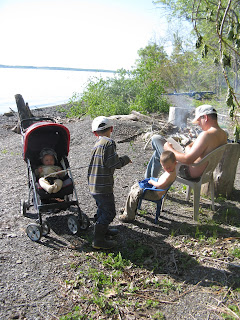 There was also some sunning and cooking of steaks over that fire in the background. 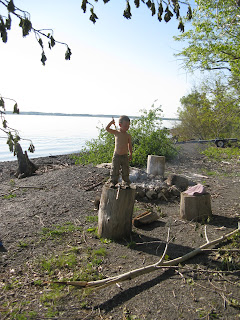 Not sure exactly what Charlie is doing here, other than his standard Lord of the Flies impression. 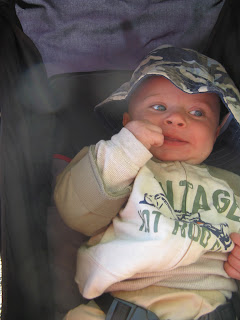 And Jack just kind of hung out, chewing on his fists in his stroller. We all have our own way of celebrating.

And there you have it: Memorial Day weekend at Blackrock. Always a party.
Posted by Kristin @ Going Country at 9:59 AM 1 comment:

I Can Sit! Progress!

I'm not sure if the acupuncture gets the credit for the fact that I can sit upright today and even walk up stairs while hauling my back-breaking infant, but it certainly didn't hurt. I mean, I got a whole hour lying down without any children to worry about, so, you know, how bad could it be?

Plus, the acupuncturist's office is in this big building in the Small City that also houses the offices of many attorneys, one of whom A. went to sit with and talk to while he was watching Jack during my needle adventure. So when I was done and went to find A. and Jack, I was treated to the sight of three be-suited lawyers in a fancy lawyer's office having a serious lawyer discussion . . . with a barefoot infant in attendance.

Plusplus, the acupuncturist gave me these camphor patches to put on my back to ease the muscle, and she informed me that they have pulverized cockroaches in them. The reason that cockroaches are supposed in Chinese medicine to be beneficial for this sort of thing sounded kind of sketchy to me, but I do enjoy referring to my cockroach patches.

Anyway. I can move better today, albeit slowly and carefully, so I have high hopes that by this weekend I'll be able to stand from a low chair without shooting pain in my back. Small steps.
Posted by Kristin @ Going Country at 11:22 AM 3 comments:

Labels: all about me, Jack, the A team

Parenting from the Prone Position

Things you can do with kids while flat on your back thanks to a suddenly pulled lower back muscle:

With an infant: Sing songs, make stupid noises, flap his arms with yours, let him chew on your fingers.

With a three-year-old: Sing songs, play Simon Says, encourage him to turn on the keyboard and dance to the music, let him play with the infant.

With a five-year-old: Tell him he has to do everything himself.

With the other adults in the house: Beg for help.

I'm going to see an acupuncturist this afternoon, which I have never done before and which I devoutly hope will make me at least semi-mobile. Because despite all the things I've found to do with my children while I'm crippled and stuck lying on the couch, the reality is that I can't do much of what I need to do. At least not without a lot of pain.

Wish me luck. And cross your fingers for me that the needles work.
Posted by Kristin @ Going Country at 11:54 AM 4 comments:


Please read this today and take your moment.

Have a wonderful day, my lovelies.