As you might have inferred from my profile description over there to the left, the Little House books were a big, big deal to me as a kid. I read them over and over. And over. I tried making some of the recipes (despite the lack of actual instructions or complete lists of ingredients). I had a real oil lantern in my bedroom, for God's sake. Not that I ever actually used it, but it went with my hideous fake patchwork quilt bedspread.

I wanted to be Laura Ingalls Wilder. And now that I live a life much closer to hers than your average modern person, I am devoutly glad I am NOT her. What a drag, man, what with the malaria and the plagues of grasshoppers and the lack of indoor plumbing.

Still, they are excellent stories. And I still have my complete set of the Little House books.

Cubby pulled Little House in the Big Woods off the bookshelf in our bedroom a couple of weeks ago and asked what it was. So I sat down and started reading it to him.

The Laura books--as he calls them--are now his favorite thing. Little House in the Big Woods is not so far removed from his realm of experience, what with the stories of Pa hunting and trapping and making maple syrup and all. Little House on the Prairie* was exciting to him because of the covered wagon, an idea that obviously appealed to him greatly.

We're halfway through Farmer Boy right now, and so far he seems to be most captivated by the description of ice cutting in the pond. The fact that we actually have one of those huge cross-cut saws and ice tongs similar to the ones described in the book is a bonus.

There are a lot of things about motherhood that are hard in quite unexpected ways, but sitting on the couch sharing my beloved Little House books with my son? That's pretty hard to beat.

* I must admit to cravenly skipping most of the parts of this book describing the Indians. Because it's really quite shockingly racist, and I don't feel like trying to explain to a three-year-old why Ma thought the only good Indian was a dead Indian. Nice, Ma. Real nice.

I Can't Stop the Lameness

It's just a part of me. You require evidence? I am happy to oblige.

I just ordered a book through the inter-library loan service called An Amish Garden: A Year in the Life of an Amish Garden. Yeah, I sure did. And I am SO EXCITED to read it and SO BUMMED that it's so new it doesn't even have a proper listing in the library system yet and I have to wait for it. But I'm first on the list when it's available to be checked out!

You're still harboring hope that I might not be so lame as I appear on the surface? Well then, let me dash those hopes by telling you that I have been anxiously awaiting the time when the local garden center place puts all their hot weather seedlings out for purchase. Because of the frost we had this week, they've been keeping the tomatoes and peppers and basil and whatnot safe in the greenhouses. But I called today and they said the tomatoes were out.

And so I immediately bribed Cubby with ice cream from the ice cream stand next door to the garden center so I could go buy my paste tomato plants (I never start these from seed myself) and jalapeno plants. Yup. Sugar rush for my kid just so I could get even more tomato plants.

I haven't put the new plants in the ground yet, but I will sometime in the next few days. Then I will have 25 tomato plants in the garden and you know what that means: The Tomato Crazy is SO ON.

Labels: all about me, Cubby, gardens, The Tomato Crazy

A. has recently started taking various trees to this custom sawmill guy he found. The guy will cut wood to whatever specification required--hence the, uh, "custom" part--for a very reasonable price. Since the trees are free thanks to the generosity of our very nice neighbors, he can get some amazing boards, beams, and whatever else he wants for not much cash.

And that's why he has spare locust boards around to build crazy shit like this: 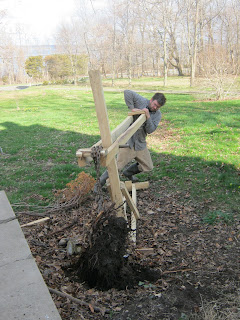 That's a hand-operated crane. He saw something like it in some random book about farming printed in the latter part of the 19th century and decided to build one.  Really, who wouldn't?

Right. NO ONE WOULD. Except A.

The stated purpose for the thing was to rip out this stump that's been languishing in the ground for about a year now. That's what A. claimed, anyway, but really, he just wanted to build a hand-operated crane. So he did. And it worked.

There are many adjectives that can be applied to my husband, but boring is definitely not one of them.

We have a freeze warning in effect--27 degrees tonight, according to the not-very-accurate weather forecasters.

It didn't get out of the forties today, and A. decided around 2 p.m. that he couldn't stand it anymore and he fired up the woodstove.

I guess I arranged the dining room in its summer configuration too early.

The only vulnerable plants in the garden right now are the twelve tomatoes I planted a week or so ago. They all have coffee cans around them to repel the cutworms, so I just went out and covered the coffee cans quite fashionably with some of the enormous supply of nasty old t-shirts discarded by A. and me. One shirt dropped over each can. It's very fetching.

And now it probably won't even freeze, but whatever. If it does, the tomatoes are appropriately dressed for the weather and we have the woodstove going.

Labels: gardens, the A team, weather

Who wants inferior scrambled eggs and limp bacon to celebrate Mother's Day? Not me. I have better eggs and bacon at home, and besides, what I really want to do today is can potatoes.

Yup. That's what I said.

See, we always end up with way too many seed potatoes. We never plant them all, and they get all withered and too sprouted before we can eat the rest. A couple of years ago, it occurred to me that potatoes can actually be canned. I had never done it, but the prospect of having already-prepped potatoes is very appealing. Especially in the heat of our awful (un-air-conditioned) summer, when we have meat on the grill and plenty of vegetables from the garden, but I can't bear the thought of boiling water to cook potatoes or rice or whatever.

Good plan! Let's can the extra seed potatoes! Except they have to be pressure canned, which takes awhile, as does the peeling and pre-cooking before the potatoes are put in the jars. And last year at this time I was quite pregnant and in no mood for extra food processing.

So I never did it.

I've been talking about doing it this year for the past few weeks. But once again, finding the time to do it without it keeping me up until way past nine o'clock at night has been a challenge.

When A. asked what I wanted to do for Mother's Day, I told him I wanted to work in the garden without interference. But now it's blowing a gale outside and our forecast is calling for well below freezing tomorrow night, so that's a no go on planting tomatoes and basil. My second choice was canning potatoes.

Happy Mother's Day to all the active-duty and retired* mothers out there. Here's hoping your day is filled with whatever makes you happy.

* Although it is a great truth of motherhood that there is no retirement. Just ask my own mother, who still spends hours patiently listening to me talk and complain, albeit now via long-distance phone calls. Happy Mother's Day particularly to my own mother, who is, without doubt, a truly amazing mom.
Posted by Kristin @ Going Country at 5:48 AM 5 comments: