I was outside getting firewood last night when I heard the dogs barking furiously at what sounded like the top of the pasture. I also heard coyotes. They sounded . . . not much farther off than the dogs. Uh oh.

I mentioned this to A. when I got back inside and he left the dishes he was doing to call the dogs. As we have learned, the dogs respond much better to a summons from the Alpha Male than they do to ineffectual me. But Mia was the only one who appeared. And the sounds of the dogs and the sounds of the coyotes seemed to be drawing closer together. So A. grabbed his shotgun and headlamp and took Mia with him up back to get the other two dogs before they got hurt.

I waited for about 15 minutes with no sign of dogs or A. before I started to get kind of nervous. I hadn't heard any gun shots, which I took as a good sign. Just as I was going out the door to go to the pasture and listen more carefully, Leda and Otty appeared. They came back on their own. Then I did have to go up to the pasture to call to A. and Mia and let them know the other dogs were back.

When A. got back, he told me he found dozens of canine tracks in the field right next to our neighbor's house, indicating that a pack of coyotes had been there when the collies arrived to, in A.'s words, break up the coyote party. And it's a good thing they did, because that field is about 50 yards from the sheep pasture.

We're glad they chased the coyotes away, but they really shouldn't be doing that without the back-up of a person with a gun. If a coyote comes to bay (that is, gets cornered somewhere by the dogs) all three dogs together could probably kill it, but they would get badly torn up in the process.

It's a useful thing, and pretty much necessary, to have fierce hunting dogs on a property with vulnerable animals, but it sure is hard on my nerves.
Posted by Kristin @ Going Country at 7:04 AM 8 comments:

I'm drinking coffee again, after a couple of days of abstaining due to That Which Shall Not Be Named, and LORD does it taste good. Nothing like an unintentional caffeine hiatus to make me aware of how lovely coffee is.

Another much-appreciated return to my diet? Protein. First in the cautious form of potatoes for lunch yesterday*, then eggs and cheese last night. YUM. Applesauce and crackers, while safe and gentle, are not particularly sustaining. Especially if you don't get to lounge around all weak and Victorian-like on the couch but instead have to be wandering around with a child who is convinced that walking is the coolest activity EVER and must be practiced at every waking moment.

That Cubby is a locomoting fool, I'm telling you.

Speaking of telling you, and totally off the subject at hand, I should tell you that Cubby has just recently really gotten the hang of crawling. MONTHS after starting to walk. Apparently he thinks that old cliche, "You have to crawl before you can walk," doesn't apply to him. Rebel child, or just confused? Only time will tell.

Perhaps I have rambled on enough for today? Yes, I think so. Happy Friday, poppets! Any good weekend plans?

*You knew potatoes have protein, right? Because they are the perfect food, Atkins be damned.
Posted by Kristin @ Going Country at 4:52 AM 8 comments:

Labels: all about me, Cubby, fun with food

We shan't talk about yesterday. I think the best thing to do is consign it to the garbage bin of Sick Days That Will Live In Infamy and move on.

So! Let me tell you a new thing I learned yesterday! We all know that ginger ale is practically a necessity for re-hydrating if you've managed to somehow expel all the liquid in your body (NOT TALKING ABOUT THAT). And we also know that mulberry juice has wonderful restorative properties. So what happens when you combine them?

Only the best, most miraculous re-hydrating beverage on the planet, is what. To say nothing of delicious.

So the next time you make mulberry juice (hey, it could happen), save a few quarts for medicinal purposes. It could just save your life. It certainly felt like it saved mine.
Posted by Kristin @ Going Country at 8:51 AM 4 comments:

We've Covered This Before

Hello, duckies. I'm sure you all noticed how very late I am in offering my greetings to you today and providing some entertainment and light relief in my own humble way.
You didn't notice? Well, good. Because the reason I am late is only that, ONCE AGAIN, my digestive system is staging a revolt and I spent most of last night and this morning bonding with my good friend the toilet.
This is getting WAY OLD, digestive system. Knock it off.
Posted by Kristin @ Going Country at 11:48 AM 5 comments:

Remember many moons ago when I said the MiL and her sisters were engaged in an epic struggle to re-paper and paint the kitchen? It's done now. Wanna see? 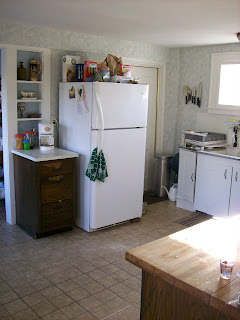 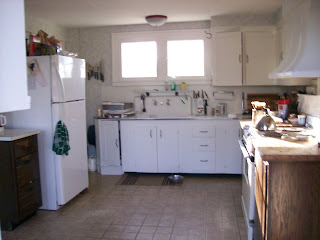 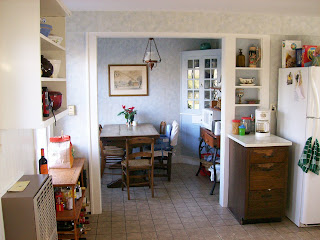 A thing to note: I do not have before photos. Except for this one of the breakfast nook back when it was still home to the dog couch. The dog couch (which is actually a pretty nice wooden settee) is now up in the MiL's room and the dogs no longer have a couch of their own. I would feel somewhat guilty about this, except the banishment of the dog couch--and the removal of some soffits that were covering defunct pipes--resulted in the placement of the table in the breakfast nook.

This changed my life.

I am not even exaggerating in the slightest. That table was so inconvenient it verged on ridiculous. It filled the entire kitchen, so the oven door couldn't be opened if A. was sitting in his chair, the refrigerator door couldn't be opened if the MiL was in her chair, and no one could get across the kitchen without sidling around the table by turning sideways and sucking in stomachs. Plus, it blocked my path from the stove to the refrigerator, which is all of three steps now that I don't have to walk all the way around the table every time I have to go from the stove to the refrigerator. Getting that table out of the middle of the kitchen is probably the most exciting event of 2010.

Okay, maybe Cubby beats the table as the most exciting event of 2010, but only by a little bit.

Another thing to note: Where the hell did all that light come from? It came from getting rid of the brown and yellow flowered wallpaper that sucked all the brightness out of the kitchen. ALLELUIA. Man, I hated that wallpaper.

And a last thing to note: This is probably the first time in 20 years that the entire kitchen has been cleaned from floor to ceiling. It's glorious, I tell you. GLORIOUS.

A round of applause for the MiL and her sisters, please.
Posted by Kristin @ Going Country at 6:23 AM 12 comments:

All I Wanted Was a Second Cup of Coffee

I was all set to indulge in that second cup as soon as Cubby went back to sleep . . .

But first I had to start the water boiling for oatmeal so we could have something for breakfast.

And then I had to sort laundry and put A.'s nasty jeans in the washing machine to soak.

And then I had to put the oatmeal in the now-boiling water and stir it around for five minutes.

And then I had to drain and spin the soaking jeans and start the whole load.

And then I had to move all the chairs and garbage can and rugs back into the kitchen because the floor the MiL mopped last night was now dry.

And then I had to eat my oatmeal before I passed out.

And then the fire was being a bitch so I had to fuss (and cuss) around with newspaper and cardboard and matches.

And then I put the last piece of wood on the now-burning fire so I had to move the empty log holder to sweep up the mess the wood leaves.

And then A. needed me to hold the funnel so he could put gas in his truck before he went to pick up some more hay.

And then I had to bring in more wood.

And then the fire was STILL being a bitch, so more blowing and smoke and cussing.

And then it was time to put the first load of laundry in the dryer and the second load in the washer.

And then, FINALLY, AN HOUR LATER, I got my second cup of coffee. By which point I REALLY needed it. Damn.
Posted by Kristin @ Going Country at 7:34 AM 4 comments:

Did you know the word "perk," as in additional benefit, is actually a shortened form of "perquisite"? So technically it should be spelled "perq."

See, A.'s not the only one who knows stuff. I got some smartness too.

A. is smart, yes, and he is also my perq, because he is my 24-hour on-call handyman. Like the creepy dudes my apartment complex in Phoenix used to send when my toilet broke, except I'm not afraid to be in the same room with him.

Handyman A. started the new year yesterday by racing in to turn off the rusted water valve on the overflowing toilet while I attempted to keep Cubby from launching himself off of the elevated changing table. This new fun game makes it somewhat difficult for me to deal with emergencies like filthy water gushing out of the toilet bowl and leaking into the bedroom downstairs.

And then, at one o'clock this morning after putting up with my tossing and turning for hours because I can't sleep due to the extreme squeakiness of our crappy metal bed frame, A. left the room and returned with a can of WD-40, with which he proceeded to oil all the wheels on the frame so I would finally settle down and let him get some damn sleep already.

Such a useful man to have around.
Posted by Kristin @ Going Country at 6:43 AM 3 comments: