Our power went out last night just as I was about to put Cubby in his bassinet. Thankful that I had already changed him for the last time and that he was ready to go to sleep, I put him to bed, hoping the power would be back on before the 2 a.m. changing and feeding. Because I can think of a lot of things worse than trying to change a diaper by flashlight, but it still wouldn't be very much fun. Especially if any, um, "accidents" were to occur in the midst of the change.

It did come back on before 2 a.m., so I didn't have to mess around with a flashlight. But it really made me reflect on how much of a pain in the ass all these things must have been before electricity. And not just changing diapers by candlelight or whatever (think of the danger of fire around a flailing baby, for instance--NOT COOL). And even when my mother-in-law had kids, there was no such thing as nursing apparel that made it easier to feed the kid without flashing the world.

And the LAUNDRY. OH MY GOD. The amount of laundry associated with babies if cloth diapers are in use, as they are for us and were for everyone before the 1980s, is bad enough. To have to handwash it all would be a staggeringly awful task.

The good old days? No thanks. I'll take the bad new days if it means I don't have to handwash two dozen shitty diapers every other day.

Let's Talk About Our Feelings

I don't really like to talk about feelings here. Except for possibly feelings of rage at that goddamn Blight that ruined the tomatoes last year and had BETTER NOT COME BACK THIS YEAR.

It makes me say bad words, that Blight. And also, use too many caps.

How are YOU feeling today? Happy it's Friday? Gleeful because spring has arrived? Or perhaps morose and down for whatever reason? Well. Whether you're happy or sad today, I have a photo that is sure to help. If you're happy, it will make you feel happier. If you're sad, it will make you feel happier. It is a Happy Photo indeed. 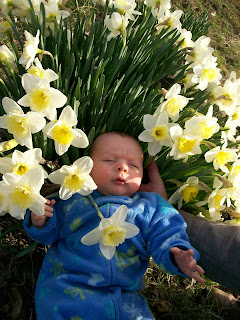 Look! It's more of our "Baby on the Ground" series!

If that wasn't enough to jolly you right up (and if it wasn't, there is something seriously wrong with you), Bonnie had her lambs yesterday. A boy and a girl. I didn't get a picture of them, but they look pretty much exactly like this photo I took last year.

Cuteness abounds at Blackrock in the spring.
Posted by Kristin @ Going Country at 7:26 AM 9 comments:

Things are growing! Like, seeds I purposely planted! WHEEE!!

The lettuce and radishes that were planted about a week ago have peeked above ground and started growing, the radishes somewhat faster than the lettuce. But then, in my experience, radishes are generally faster than anything else in the garden. Fast and loose, those radishes. Dirty.

There is also a tiny volunteer lettuce I spied with my little eye the other day. It's not the one I had the cold frame over. That one was eaten by slugs before I could get a protective layer of salt around it. Bastard slugs. Let the war begin.

Also growing on a volunteer basis is a totally random onion. I had started some onions from seed last spring that didn't do very well. Mostly because I killed the majority of them with my cold-frame stupidity. And then the ones I did manage to actually get in the garden never did much. I don't think we ever actually even ate any, as a matter of fact. But one appears to have somehow over-wintered and is now a pretty big plant. I have no idea how this happened. This is why I like to call it The Garden of Mystery*.

Also growing, but in the bathroom instead of the garden, are some seeds I started inside. I finally got several varieties of tomatoes started this past weekend, so it's too soon for them. But the eggplants I started a couple of weeks ago are showing signs of life. Except the only life being shown is the three seeds in one little pot. Why all those seeds came up and none of the others have so far I really couldn't tell you. But at least we'll have three eggplant plants this year. Assuming I don't manage to kill them all some way between now and when they actually start producing eggplants.

I make no promises.

* I don't actually call it that. That would be weird.
Posted by Kristin @ Going Country at 5:04 AM 9 comments:

Let's talk about the wood milling that was first mentioned lo these many months ago, finally got done this past weekend, and is just now making it into post form. Because I am just that prompt.

The sawmill got to A.'s friend Jodi's house at 8:30 on Friday morning. A. had arrived earlier, about seven, to get the logs ready and in position. No mean feat, considering we're talking old growth trees, some of which were almost two feet in diameter. Luckily, neither A. nor Jodi is exactly petite. This is important, because Old Dude pretty much just runs the sawmill from his chair and expects his customers to load the logs and unload the boards.

So here's the sawmill just starting to cut into a log. 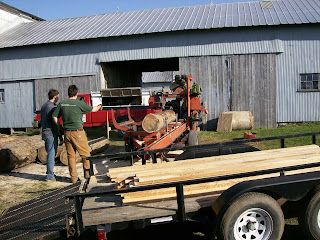 I think this is a sycamore log, but I wouldn't bet Cubby on it.

Based on the testimony from A. and Jodi, Old Dude was pretty merciless with the pace. I think he was testing them, seeing how fast they could go. Although he did help a little, as this photo shows. This is A. and Old Dude loading a log onto the sawmill using cant hooks, which are big sticks with a wicked hook on the end, used for kind of gripping the log and rolling it. 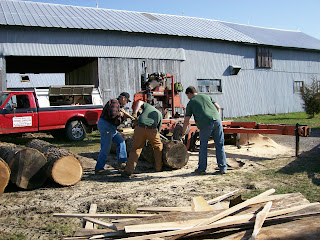 Better them than me.

After the boards were cut, they were stacked in various locations based on type of wood and size of cut. This is a pile of Jodi's sycamore that he had left in the original wavy shape. 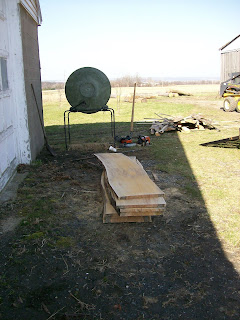 In case you can't tell how wide those are . . . they're WIDE. Maybe a foot and some inches.

And so it went: load logs, unload boards, stack boards. All day. And when I say "all day" I mean ALL DAY. Twelve hours, as a matter of fact. A. estimated about 3,000 board feet were produced in the end, between his trees and Jodi's trees. For those of you with knowledge of these things, you know 3,000 board feet is a shitload of wood. For those of you without knowledge of these things? Well, that's still a shitload of wood.

A. and Jodi were hurtin' the next day, creaking around like old men. But they still had to stack all the wood properly so it can dry out and not rot in the rain. This took approximately six hours. And did I mention that it was over 80 degrees both days? Such pleasant work to do in the blazing sun.

This is A.'s pile, all pine boards. 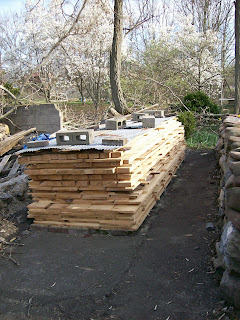 Now that's a mighty purdy sight.
You wouldn't even be able to buy boards this big at Home Depot. But if you could, you probably couldn't afford this many. We certainly couldn't. But for the price of 18 hours and gallons of sweat--plus a pretty nasty sunburn that has made him into a literal redneck--all that wood is A.'s.

* You may have noticed I said you shouldn't ADMIT to drinking before noon. Not that you SHOULDN'T DRINK. An important distinction.
Posted by Kristin @ Going Country at 5:37 AM 8 comments:

I Am a Woman of My Word 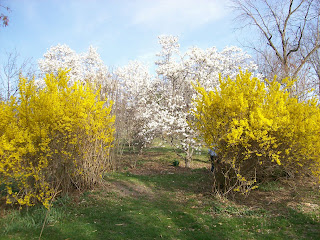 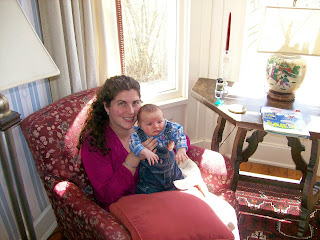 Farmer Cubby, looking so excited about getting his first tractor. Once he gets a few feet taller. And masters that whole "sitting unassisted" thing. 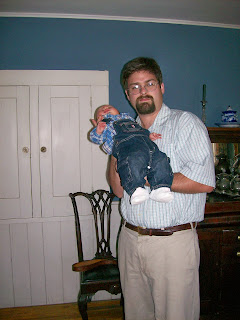 Farmer Cubby and his booties. Except you can't see the booties very well. Oops. But it's probably for the best, lest we all be paralyzed by the cuteness.
Cliche #3: Baby animals 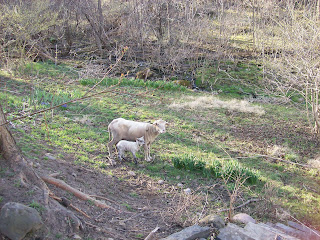 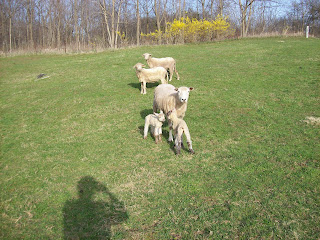 There! Wasn't that exciting? Just say yes.
Posted by Kristin @ Going Country at 6:53 AM 13 comments:

Yesterday was a day of cliches.

Okay, so Easter is supposed to be all green grass and flowers and bright sunshine and happiness all around. Easter in upstate New York? Much more likely to feature snow and misery. Except this year. Thanks to the crazy temperatures in the 80s for a couple of days prior, yesterday looked like some kind of Hallmark version of Easter. The magnolias were in full bloom. And we have a grove of about seven trees, so that's a whole lotta blooming. The forsythia was a hedge of bright yellow. The grass was green, the daffodils were out in force, the sun was shining, and the sky was bright blue. Craziness. But in a good way.

Pretty much the best thing so far about having a baby is getting to dress him up like a little doll. Cubby's ensemble yesterday featured the bunny booties given to him by a family member. They were adorable beyond belief. They also kept coming off, but you can't have everything.

LAAAAMMBS!!! Of the live variety, not the leg of kind (though we did have that for dinner yesterday). Mother Merino had produced her lamb by the time A. got up to the pasture yesterday morning. And when we returned from the family dinner, we found Coco the Cotswold had had her twins. So far we're at two boys and a girl, with three ewes left to give birth at any time.

I have pictures to illustrate all of this. But the camera is downstairs, Cubby is pinning me to my chair at the moment, and this means you'll just have to wait for the photos. It'll give you something to look forward to, right? Right.
Posted by Kristin @ Going Country at 8:34 AM 7 comments:

It occurred to me this year for the first time how strange it is that the Easter bunny would leave a chocolate image of himself for consumption. Kind of masochistic, right?