Long version: My parents arrived for a weekend visit this day, and because we were at the dentist in the afternoon and didn't get home until about 6 p.m., my mother asked if she could bring dinner with her. So she brought three rotisserie chickens, some deli macaroni salad, some pre-roasted vegetables, and a LOT of raw vegetables.

Long version: (If you saw this before I realized this part somehow got deleted, sorry! I would hate to deprive anyone of any of my many, many words, so here it is.)

I was outside hanging laundry when I saw one of the white meat rabbits hopping down the road.

I let our livestock manager know, and he and Poppy spent a fruitless but very entertaining ten minutes trying to herd the rabbit back over to the casita.

Rabbits can't be herded. We know this now.

Instead of going where it was supposed to, it bolted into the cow pasture where A. couldn't get at it. Since he couldn't catch it, he shot it. (No cows were there; don't worry.) And then he put Poppy through the fence so she could go retrieve it.

When he went over to investigate the scene of the escape, he found another rabbit out, so he shot that one, too. He'd been meaning to butcher some, anyway. This little episode just precipitated matters.

So we had rabbit tacos for dinner. And this is why menu planning doesn't work with my life.

My parents brought me avocados, and A. bought some when we were in the city for the dentist, so we had plenty of avocados for guacamole. Yay. 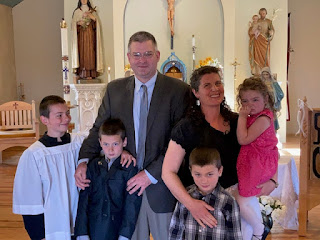 Pretty much all the posed photos my dad took are weird like this . . . 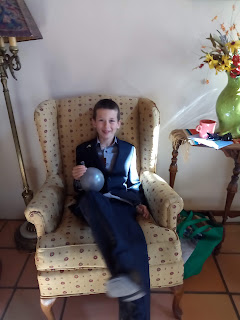 But I did get one good candid photo of The Man of the Hour.

Calvin's request for his celebratory First Communion meal were pasta with pesto and pots de creme. I still have some of last summer's pesto in the freezer, so that was an easy one.

He didn't request the steak and salad. Those were my additions.

Long version: I very virtuously prepped the casserole--leftover rabbit taco meat mixed with more salsa, sour cream, and garlic powder, then layered with corn tortillas and shredded cheese--at 6 a.m. so I could just put it in the oven when I got home from work.

And then none of the children liked it.

Well, Cubby did, I think, but the others were not enthused. I don't know why. It tasted pretty good to me. Oh well. Better luck next time.

Long version: Last time A. went to the store, I mentioned he might want to see if there was any non-beef meat that looked good. He came home with a giant spiral-sliced ham. And that's what I cooked.

Long version: This was a workday, so I wasn't really in the mood to make a big Cinco de Mayo feast. I did have three avocados and half a bag of tortilla chips left from when my parents were here, though, so I made some guacamole and we had a festive appetizer before our very not-Mexican dinner.

It may not be Mexican, but few things are better than ham and potatoes fried in butter with grated cheddar cheese melted on top. That's what the kids had.

A. had some of the ham with cheese on it, plus the salad and peas.

I had a salad with peas and ham in it.

No one had a margarita. Bummer.

Long version: I took ground beef out of the freezer, planning to make hamburgers and roasted potatoes. But then Cubby and Calvin were on a school field trip and I wasn't sure when they would be home, so I decided to make something that would re-heat easily whenever they did make it home.

So, taco meat. Should've had this the day before.

Calvin had that with corn tortillas and cheese when they made it home around 8 p.m. Cubby had leftover potatoes and ham. And then we all went to bed, because that's WAY too late for dinner.

Almost every week in my exhaustive reporting of our every dinner, I list ranch dressing. More than one person* has asked me about this. Do I buy it? What do I buy? Or do I make it? And if so, how?
So I figured I should just answer all these burning questions here and now: I make it. And this is how.
1/2 cup mayonnaise
1/4 cup sour cream (for a thicker dip), plain yogurt, or buttermilk (for a thinner dressing)
1.5 teaspoons dried dill weed
1-1.5 teaspoons garlic powder (depending on how fond of garlic you are--I use 1.5 because I am Very Fond)
a few grinds of black pepper
Put it all in a jar or bowl, mix with a fork or whisk until smooth, and that's it.
You can also use some onion powder in place of some of the garlic powder, but for some reason, I only ever have garlic powder.
There! The Internet is a better place because there is one more recipe for ranch dressing on it, I'm sure. 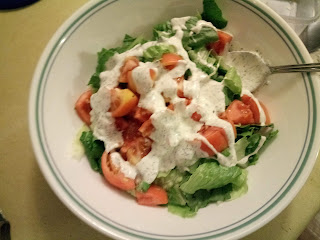 And as a bonus, the Internet now has a very bad photo of said dressing on a very unexciting salad.
Have a nice Tuesday.
* Hi, Linda!
Posted by Kristin @ Going Country at 4:30 AM 3 comments:

I didn't take very many photos this week, thanks to being at work so much.

A. did some laundry during the week while I was working, but I never did get it all put away, which is why I had this situation to address on Friday morning. 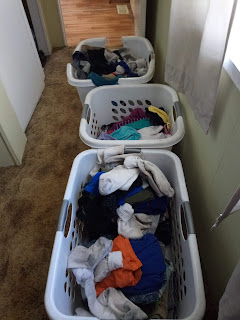 I actually don't mind doing laundry (usually) and I find it very satisfying to get it all put away, so the laundry pile-up was bugging me.
We had a week of very strong winds, which is definitely not the kids' favorite weather, but Cubby found the lemonade in those particular lemons by fashioning a sailing wagon that actually sailed down the road. 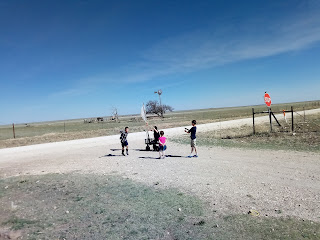 Created by Cubby using Calvin's wagon, and named the St. Poppy.
I was informed that he used a leg of mutton sail, which of course meant nothing to me. I have no idea how Cubby even knew what that was, but whatever sail it was, it worked. They sailed about a quarter mile in it, with Captain Cubby at the helm.
Everyone else got a turn, too, but they mostly fell over in the ditch or crashed into the fence. Rough seas, I guess.
Switching gears . . .
My parents arrived Friday just for the weekend so they could be here for Calvin's First Communion. We were at the dentist* Friday afternoon and didn't get home until almost 6 p.m., so my mom brought us dinner. This included a rather impressive variety of vegetables for crudites. 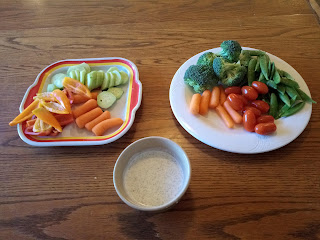 Amazingly, every bit of this got eaten.
And there you have it! My life, snapshotted.
* Thanks to pandemic disruptions and my own poor planning, it had been almost two years since the boys had been, and Poppy had never been. So all four had appointments, and none of them had any cavities. I was very relieved, as I had no desire to drive another 180 miles for fillings.
Posted by Kristin @ Going Country at 5:11 AM 5 comments: