What's that? Christmas is supposed to be on December 25? Sure, maybe the first Christmas. But the second Christmas? That's tomorrow. At least, it is here in the frozen north.

See, lots of gifts from far-flung family members (which is pretty much ALL of our family members) were shipped to the children here at our cabin in the woods. But we went to Blackrock for the actual day of Christmas. I could have packed all the gifts up to bring to Blackrock, let the kids open everything on Christmas Day, and then packed everything back into the minivan and brought it back here.

This seemed impractical in many ways. Besides, they get so many gifts every year, it seemed like a good idea to spread the opening of them out over time so they'd have time to appreciate some of their gifts before they got new ones.

Okay, so mostly I didn't want to have to load them in and out of the van multiple times, but whatever. That other reason sounded convincing, right? Right.

So tonight I spent some time carefully wrapping the gifts that came straight from Amazon unwrapped. And by "carefully," I mean I swaddled the gifts in the brown packing paper from the boxes and secured it with a bunch of tape. 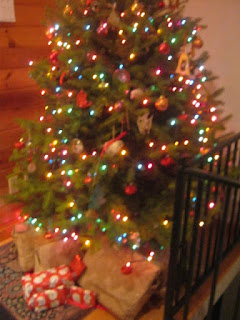 Luckily for the aesthetics of the Pile of Presents, some of the gifts came to us already wrapped in actual wrapping paper.

You think those boys are going to notice what the gifts are wrapped in as they're hysterically tearing the paper off their Star Wars action figures? No, they will not. So I get to re-use useless paper one last time before it gets recycled AND I don't have to buy wrapping paper. Works for me.

We're celebrating New Year's Eve by . . . well, A. is making the kids some wool mittens from old sweaters. 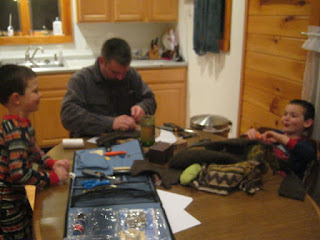 It's terrible the way we spoil them.

The whole family went snowshoeing earlier today so Cubby and I could try out the new snowshoes we both got for Christmas. Then we had some tamales for dinner that my sister sent us as a Christmas gift.

So now that we've started using gifts from Christmas #1, it's time for Christmas #2.

'Tis the Season for Improvised Weaponry


Actually, it's always the season for creative weaponry around here, it's just that--thanks to generous gift-giving relatives--now there are more things to get inventive with. Which means more things to fight with (and, of course, fight over.)

First, we have kazoos. My mother very kindly bought one for each boy. Although they are excellent for interminable kazoo renditions of "The Twelve Days of Christmas," they can also be attached to form either a battleship or a sword, depending on how menacing you want to be. 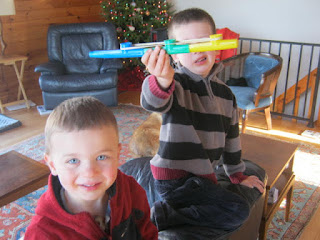 And then there's the set of pieces resembling giant Tinker Toys that's supposed to be for building forts, but has so far only been used to make enormous starships and various lances and swords. 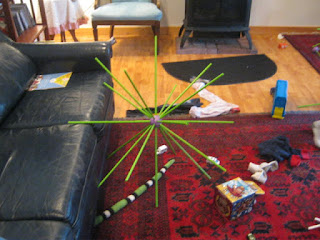 They look kind of cool, until they start flying around, at which point they're a danger to eyes everywhere.

It's so nice to see them exercising their creativity.

So how do I celebrate reaching the wise old age of 37?

By sitting by the woodstove early in the morning with coffee.

No kids. No noise. Just chicory coffee and quiet.

Of such things are a happy 37th birthday made.
Posted by Kristin @ Going Country at 4:23 AM 7 comments: