When I was young, my mom used to put on two records (yes, the actual rad vinyl) when we were doing our required chores, I suppose to make it more fun: Michael Jackson's Thriller and the Footloose soundtrack.

The songs from those two records bring me right back to my childhood (and my chores). And now I am providing a soundtrack for my own children to take a trip down memory lane someday: Billy Idol's Greatest Hits.

Nope, totally not kidding. If I have learned one thing in my six years of parenting three children, it's that every child loves "Dancing with Myself*." All of mine do, anyway. Including Jack, who gets right up on his knees and waves his arms around when it comes on.

That CD stays in the stereo upstairs, so whenever we need a change of scene, we head upstairs to turn on their dance music and let them run around like maniacs in the upstairs hall. We don't usually get to "Flesh for Fantasy," which is obviously not something I want lyric-conscious Cubby to start asking me questions about, but the rest of it is ambiguous enough for little kids.

They can't resist the beat. And few things in life--well, in my life, anyway--are more amusing than watching small boys bust out their best dance moves to "Mony, Mony."

Of such things are childhood memories made.

* I just looked up the original video for this song to link to, and WOAH, BILLY. Never going to show that one to my children. Billy Idol was into creepy zombies 30 years before they were the big thing, apparently.

Labels: all about me, Charlie, Cubby, family, Jack, randomness


Today my two youngest children watched me throw up into a plastic bowl while I was sitting on the couch. This is one of those defining moments of parenthood, right? When your own needs--in this case, the need for no audience when emptying the contents of your stomach--is subsumed by the need to take care of small children.

And what did those small, precious children do when they witnessed my lowest moment? Did they express concern for my well-being? No. They laughed. And then Charlie helpfully observed, "Wow, that's a lot of throw up!" while Jack tried to grab the bowl.

I had been sick--in lesser though definitely not fun ways--all morning even before A. left for work, so he told me he had no appointments today and I could call him if I needed him. I briefly considered collapsing on the couch and just toughing it out until 5:30 p.m., but then I realized that sort of martyrdom is really unnecessary. Also stupid.

So I made the distress call and A. was home within 45 minutes. At which point I put Jack down for a nap and crawled into the bed, where I stayed for the next four hours.

It was miserable of course, but not really. And that is because I was not trying to change diapers or meet the bus or provide food or anything else when all I felt like doing was hiding.

The definition of stay-at-home-parent luxury: Being allowed to be sick in peace. Thank you, A. Gold star for you.

I'm better now. I've had some hot water with lemon and honey, and a little rice. Tomorrow I'm sure I'll be revved up and raring to go for another day of caregiving.

Or at least not vomiting, which is really all I ask.

Labels: all about me, Cubby, Jack, the A team

The Snowsuit and the Sculpture


I've been feeling kind of bad lately that I haven't made much of an effort to get Jack outside. It's been cold and wet and he doesn't walk yet, and a crawling baby on cold, wet ground makes for a pretty miserable experience. But then yesterday it was cold enough that the ground was frozen and Charlie was already outside when Jack woke up from his nap, so . . . 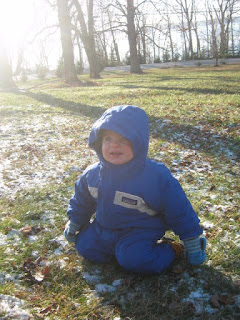 It's the return of the baby snowsuit! Charlie's particular favorite, you may recall.

I crammed him into the snowsuit and found some tiny mittens for his tiny hands and off we went. All was well until the inevitable happened after about five seconds . . . 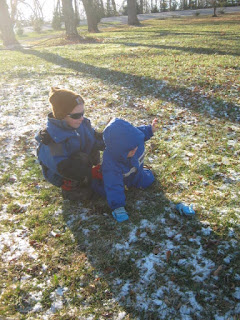 Mittens never, ever stay on a baby's hands. They're off within seconds, and then the baby puts his bare hand on snow and the fun is over.

So that was that.

I was expecting some collection of, like, pipe cleaners and construction paper. I was not expecting a foot-tall thing made of solid wood and painted in neon pink. 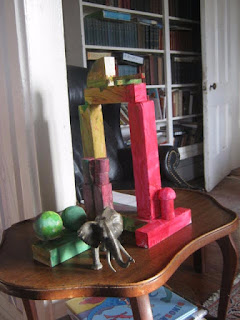 The toy elephant is for scale. Or maybe it's supposed to be the Taj Mahal? It's certainly large enough.

So now in addition to the reams of papers and paintings and worksheets and other priceless treasures my children haul home every day from school, I have to find an appropriately magnificent display spot for The Sculpture.

I think it will look lovely on the dresser in his room. Maybe even along with the elephant.


Cutting up winter squash is some kind of bullshit. Ow. And this time it was even butternut squash! That's supposed to be the easy kind!

Obviously a Hubbard would be the end of my frail little hands.