Friday Food: Late Because I Am OUT OF THE HOUSE, WHAT?

Short version: Salad for me, Manfood for everyone else, chocolate chip cookie ice cream sandwiches

Long versions: I had been planning to use a gift certificate I had for the sole restaurant in the village so that I wouldn't have to cook or clean up on my birthday, but then it rained/hailed/snowed all day and we were sitting in a cloud that made it hard to see more than a couple hundred feet. So I decided it wasn't worth driving anywhere and deputized A. for dinner duty.

He made a skillet of bacon, potatoes, garlic, and cheese. I made myself a salad with toasted walnuts, cheese, avocado, and sweet potato.

I also deputized Cubby. He was on dessert duty. He made chocolate chip cookies from his cookbook. I stayed in the kitchen and answered questions (and, okay, reminded him when he was about to forget the granulated sugar), but otherwise did nothing. He made them on his own.

We had a little vanilla ice cream left from Jack's birthday, so we made ice cream sandwiches with the cookies. Two thumbs up.

Long version: I had the gnarly end left from the piece of elk I had cooked a few days before that I wanted to use up, along with the chicken stock left from simmering the tamales on Christmas Day. Some of my tamales fell apart, so the stock had thickened with the masa mixture from the tamales. I cooked the elk in that with garlic, chili powder, and some of our roasted green chilis, then added in some chopped carrots and, as an afterthought, some of the elk/potato/chili dish A. had made the week before.

Not sure what'd you call this, but it turned out pretty spicy. A. really liked it. Everyone else had the vegetable soup.

Long version: We all ate the cheeseburgers. A. had some of the leftover elk stew, and then Cubby wanted to try some. He ended up eating two bowls and finishing it. The boy does love his chili. He told me it made his tummy warm. He has obviously assimilated to New Mexican food.

Jack and Poppy wanted some of the stew when they saw A. and Cubby eating it, but it was too spicy for them, so they ended up eating some of the leftover vegetable soup.

Long version: Last package of T-bone steaks. Well, unless I unearth another one while shifting the remaining bags of elk in the freezer. That is possible.

I took all the children to the school playground this day, because it was really time to get out of the house. It was only about 38 degrees, but the sun was shining and the wind wasn't blowing, so out you get, kids. 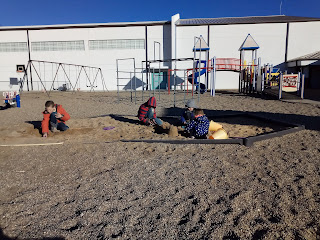 It was a stroke of luck for them that the sand toys had been left out.

Long version: The chicken was the extra rooster that A. finally butchered in the afternoon. I was going to spatchcock it so it would cook faster, but I forgot how freaking HARD it is to break through the bones of a home-raised chicken. Nothing at all like cutting through the soft bones of a commercially-raised chicken. I got part of the backbone out and then had to give up. It was pretty mangled looking.

Then I read a method online for roasting a skinned chicken without drying it out (A. always skins the chicken because I have never managed to pluck a chicken well enough that I would actually want to eat the skin) that involved making deep cuts in the meat through to the bone and then rubbing in salt, lemon juice, and spices. I did this. It wasn't notably dry, but I wouldn't say it was particularly juicy, either.

The potatoes were from a box of potatoes Rafael brought us, along with a ton of string cheese and some caraway bread that only Cubby will eat. We really didn't need any more potatoes, as we still have three boxes of the giant Idahos in A.'s office, but I will continue to doggedly work my way through them.

The swiss chard I discovered in the bottom of a crisper drawer when I was getting out the broccoli. My parents brought it. My dad grew it.  There were a few leaves that had gotten pretty yellow, but I cooked the bit that was left.

I made the pudding only because I had seven egg yolks left after making the chocolate roulade on Christmas Day. I used this recipe, doubling it and using my seven egg yolks instead of six. This makes a TON of pudding. Like, more than half a gallon. The children were very excited.

It is much richer than the recipe I've been using, and also slightly less chocolate-y, and was of course preferred by the family. I told them I won't be making that except for when I make the roulade, though, because who's going to want seven egg whites hanging around just because they wanted pudding? Not me.

Short version: Health, wealth, and happiness for 2020. Plus rice and leftover chocolate pudding.

Long version: Pork shoulder, slowly cooked, then shredded and fried in some of the rendered fat was this year's insurance for health.

The greens were frozen kohlrabi greens from the summer garden.

The black-eyed peas were actually the other half of the bag I bought last year and that have been sitting in the pantry all this time. I kind of screwed them up by totally spacing when I was making the roux and putting in butter instead of a neutral oil like canola, and I didn't have tomato paste, so I just used the rest of a can of tomatoes that were hanging out in the fridge.

I didn't even use any smoked pork product in the peas, but I did have a lot of the smoked venison stock on hand, so I used that. The peas ended up good, despite all my changes.

Short version: I did not orchestrate food in any way.

Long version: I had a cheeseburger and fries (and gin) at the hotel I'm staying at. I assume A. and the kids ate the leftovers from our New Year's Day feast, and possibly A. fried the rabbit that's been sitting in the refrigerator for a couple of days. But maybe they just ate cereal or candy or something. I wouldn't know, because I wasn't there. Whee!


I spent quite a bit of time in the kitchen today ensuring our health, wealth, and happiness for the year, as well as making stock from the rooster A. finally dispatched a couple of days ago. This all produced many dishes, thus adding to my kitchen work for the day.

But tomorrow, I'm not planning on cooking anything but breakfast. I'm not cleaning up anything, either.

And how am I doing that? By leaving.

See, I told A. about a month ago that all I wanted for my birthday was to go stay a night in a hotel. By myself. What A. called, "An introvert's perfect 40th birthday."

I'm going to a small city 90 miles away and staying just the one night at a hotel there. I'll only be gone about 36 hours, but none of those hours will involve cooking, cleaning, or caring for anyone but myself.

I asked the boys what they would do with Daddy while I was gone.

Jack said: "Mommy, it's going to be totally out of control."

Cubby said: "Lots of snacks, lots of videos, and candy."

Charlie said: "It's going to be chaos. I have big plans. The remnants will be obvious."*

Cubby wondered what Poppy thought about my being gone. I said that she doesn't have much of a sense of time yet, so until I was actually gone, she wouldn't have any opinions. "Yeah," said Charlie, "And you're not wearing your earrings yet, so she isn't suspicious."

I must admit that I'm going to miss these four whackos: 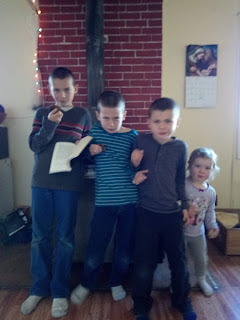 But I also must admit that I'm very much looking forward to not being on call for them for even a short period of time.

* I swear that's EXACTLY what he said. Ominous, to say the least. 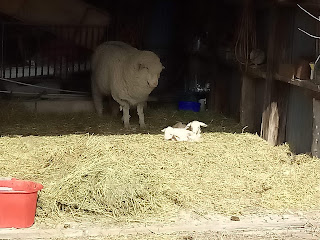 Cubby went out about seven this morning to shoot some more of the wretched rabbits and discovered those two baby boys there lying on the frozen ground with their mother. They had been born very recently, which was lucky for them because it was 20 degrees outside.

A. carried them into the shed he had prepared for them and put a small space heater in there to help out the smaller, weaker lamb. After a couple of hours drying out in the hay, he was up and nursing with his brother. Mother and babies were out this afternoon, grazing and nursing, respectively.

Cubby is very excited because he chose market lamb as one of his 4-H projects this year, and one of those boys there will probably be his show lamb.

There's one other ewe that looks pretty close to lambing, but we hope she holds off until it's not in the teens at night. We'll see.

So. Anyone remember Current Lamb Count? Here it is, after many years lamb-less.

Current Lamb Count: Two--two boys, no girls. And an unknown number of ewes left to deliver.