Introductions Are in Order

As of yesterday, we have a horse. 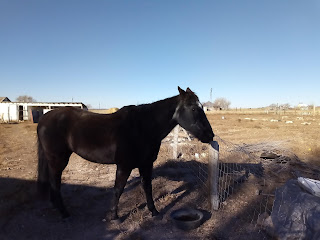 Samson was given to us by one of the teachers at the school, who also co-owns a ranch down the hill and runs the quarter-horse breeding program there. Her family has had a horse operation for generations, and to say she knows horses is a great understatement. Samson was the horse her own daughter, now grown, learned to ride on and won many competitions with.

Samson is now 22 years old and has bad teeth, which means he can't just graze on pasture like all horses do here. He needs special senior horse feed, which is expensive and requires someone to actually feed him twice a day.

On a large ranch, this care quickly becomes burdensome and impractical, as well as expensive. So Samson really couldn't stay where he was, but they didn't want to just put him down, because besides his teeth, he's in very good shape.

So she thought of us. I had asked her about riding lessons for the boys when we first moved here, and she thought maybe we would like Samson.

Samson is an exceptionally calm and well-trained horse, which is just what our children need. According to the lady we got him from, who taught her own two daughters to ride on him, there is no safer horse for children. Good thing, as I know exactly nothing about horses and wouldn't know what to do with a horse that isn't basically like a huge, well-trained dog.

His implacable nature is also useful given that Jasper--who apparently has a deep distrust of horses--spent all day yesterday by the fence, barking at the horse. 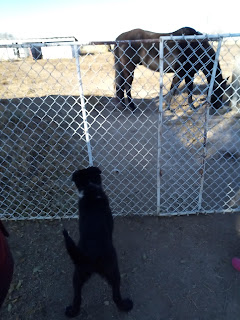 Samson is living in half of the back pasture with the chickens. It's a little louder here than what he was used to, but it doesn't seem to bother him.

Welcome to Crazytown, Samson. We're so glad you're here.

Long version: My plan was to make roasted potatoes, but Charlie still had a wicked sore throat, so I mashed the potatoes instead so he could eat those for dinner with some cheese.

The squash was one of the volunteers from the backyard. This mysterious variety was one of the more interesting-looking ones--meaning it wasn't just a pumpkin--so I had high hopes it would be tasty.

My definition of "tasty" for squash is one that comes as close to a sweet potato as possible. That is, dense, sweet, and not watery.

This one delivered. Good thing, too, as it was a really big one that left me with a LOT of cooked squash. 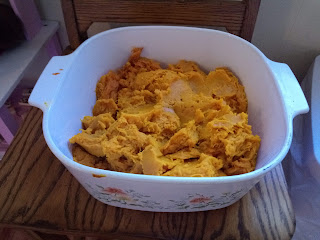 This is my biggest container. It holds probably two gallons. The squash didn't fill it, but pretty dang close.

Long version: We went to see a (wo)man about a horse and didn't get home until later than I had anticipated. I had already prepped the elk meat by trimming it and cutting it into thin slices, then put it in a marinade of olive oil, vinegar, salt, and garlic. When we got home, I browned it on my cast iron grill pan--the best way to get a lot of meat browned without it steaming in the released liquid, yuck--and then I mixed in some barbecue sauce.

Long version: I used the remainder of the elk meat I had prepped and marinated the day before for the tacos. I simmered it for awhile in some tomato juice and and cumin and chile powder to make it a bit more tender.

I had intended to make homemade tortillas, but then A. ended up on an hours-long odyssey to get hay and didn't get home until 9 p.m. Making tortillas is not something I want to do with children under my feet, so they got store-bought tortillas.

The soup was nothing more than the cooked squash, onion, chicken stock, and a bit of cream. It used up a gratifying amount of squash, as well as a couple of the numerous containers of chicken stock in the freezer. It was good, but next time I think I'll add some bacon.

"Chile beans" means pinto beans that I added onion, tomato, and spices to while I cooked them. I prefer them this way rather than plain, but lately I've been too lazy to do the add-ins.

Long version: Didn't we just have cheeseburgers on Friday? Yes. But this was a Monday and a workday for me, and therefore required something quick to cook.

Long version: The beef was a chuck roast that I put in the oven completely frozen and cooked a long time with just salt, pepper, garlic salt, vinegar, and water, then cut into pieces and fried in tallow with more salt, pepper, and garlic powder.

This method of braising the meat first and then browning it--rather than the other way around--is the method used to make carnitas, and is very useful for people like me who hate the spattering of browning raw meat. And also never take meat out to thaw in time. Ahem. 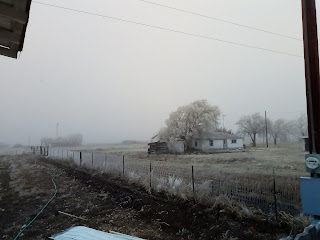 This is what it looked like out my back door the previous Tuesday. Cozy.

Long version: This was a rough day at work, and capping it off with vomit as soon as I arrived home  took care of any ambition I might have had to make anything interesting for dinner.

Luckily, we had just enough leftover meat--carnitas beef and hamburgers--to go around. I supplemented that with tortillas and cheese and cucumber slices with vinegar and salt and called it done.

I would normally have served bread and butter with this sort of meal, but we were out of bread. That was the kind of day I was having.

The elderly watermelon was disappointing. It's not as if I forgot about the watermelon Rafael gave us a couple of weeks ago. It's just that watermelon is somehow not quite as appealing when it's below freezing outside, and also with all the Halloween treats and candy around, fruit for dessert has not been so common.

In any case, I let it go too long. It still tasted good, but it had gotten kind of mushy. Bummer. I was just going to give it to the chickens, but instead I decided to make juice out of it.

From that large watermelon, I got about a gallon and a half of juice, and a really sticky mess in the kitchen to clean up. But at least I didn't waste it.


This afternoon while I was working at the school, Jack's preschool teacher came to find me to tell me that he was running a slight fever and not feeling well. There was only about an hour left of the school day, so he spent the remainder of the day under a blanket reading books in the corner of his classroom.

He tearfully asked me to carry him off the bus and into the house. Unfortunately, that was not possible, given my load of my own backpack, his backpack, and Poppy. Cubby offered to carry him off and just as they got to the bottom of the bus steps, Jack threw up all over.

A little bit of it got on the bottom step of the bus, but most of it landed on the ground*. He threw up again while he was walking the rest of the way to the house.

As sorry as I felt for him, I mostly felt relief that he did it somewhere where I didn't have to clean it up. It would have been a real mess on the bus.

Good job on waiting until you were in the great outdoors, Jack. Your teacher and I both thank you.

* A tiny bit also got on Cubby's hand, which is really gross and a poor repayment for being such a nice older brother.