Didn't I just say last week that it had been quite a week? Yeah. That, again. The fire is still burning to the south of us and I still have a bag packed with clothes and important documents in case we need to leave. But through it all, we eat.

Long version: My parents came for a short visit and brought enough avocados that we could make guacamole. And there was much happiness in the land.

The cherry pie was one of The Village Piemaker's pies that the lady who owns my parents' hotel-type thing always leaves in the freezer for them. I think the blueberry is actually better, but I don't really like pie, so who cares what I think.

Long version: The greens were spinach and chard from my dad's garden. They were really, really good.

Long version: Where is the redeeming nutritional value to this meal? Nowhere, that's where.

We usually have the waffles after church, but we didn't go to church this Sunday because A. and Cubby were in New York*. So I decided to make the waffles for dinner.

And of course, we had to have dessert, because it was Sunday. And I had just a little ice cream and just a few strawberries left from the huge quantity of fresh fruit my mother brought with her. And it was the fourth straight day of over 90 degrees with hideous winds.

I think you can see that strawberry milkshakes were inevitable. 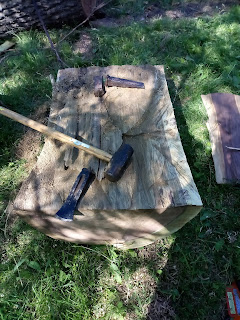 One of the reasons A. went back to New York was to cut up the giant black walnut tree the MiL had taken down this winter. No one but A. would try to cut up a tree that size with nothing but a chainsaw, a sledgehammer, and some wedges. All these years later, and still Mr. Relentless.

Long version: My brother and his family stopped here for the night on their way to Minnesota to visit my SiL's family, so I put the pork in the oven in the morning to make sure I had something to feed them for dinner.

Had I been a really dedicated hostess, I would have made them corn tortillas. However, it was 80 degrees in my kitchen at 5 p.m. and I'm pretty sure standing at a blazing hot cast-iron griddle pan for 45 minutes would have melted me right into the floor.

I'll never make it as an abuelita.

The ice cream was the New York Times one that calls for shaking cream, sugar, and vanilla in a mason jar, then freezing. It tasted pretty good, but the texture was sort of odd. Kind of like frozen mousse. Thick, and a bit icy. I did one jar with plain vanilla, and one with cocoa powder added to the vanilla recipe, and they were both good.

Not as good as real ice cream, of course, but for those of us without regular access to real ice cream, it's a good thing to know about. And it's particularly good to do with a bunch of kids around, because they are all about both shaking things and eating ice cream.

Long version: The pasta had the last of the meatball sauce from Saturday, a cube of the garlic scape pesto from the freezer, the last quarter cup of cooked spinach chopped fine, and some shredded asadero.

I had a salad.

Also worth noting: It never got above 78 degrees this day, which means my kitchen was not a sweat bath when we sat down to eat. How refreshing.

Long version: The only thing of note this day is that A. and Cubby arrived home late at night after a two-day cannonball run/drive home from New York.

I was very glad to have them home. It has been, as I noted above, a hell of a week, and I was not too pleased to have the family split up during it.

* Now you know why I went back into the chicken coop after being menaced by the snake: Because there was no one else here to do it. Had A. been here, you bet your sweet Caroline I would have sent him in there while I stayed cowering in the house.

As the World Burns


Yesterday I went into the chicken coop to check for eggs and a snake hissed and lunged out of one of the other nesting boxes at me.

Let me tell you how not happy I was about that. SO NOT HAPPY. I hate snakes. Especially being surprised by one in an enclosed space.

I couldn't see it very well, because it retreated back into the box and I didn't have a flashlight. I was pretty sure it was a non-venomous bull snake, though, rather than a rattlesnake. I still retreated, but when I cautiously re-entered a few minutes later with a long stick, it was gone.

There was, however, a dead chick in the coop this morning. Dammit.

Also yesterday, the entire south and east horizons were a wall of smoke.

A wildfire sparked by lightning started just five miles south of us on Saturday, and by yesterday had burned thousands of acres and was threatening the village, along with several ranches in its path. The 30-mile-an-hour winds made it pretty much impossible to control, and I was getting a lot of phone calls from neighbors offering places to stay if we needed to leave, a place for our horse, or just information.

I had a bag packed with clothes and in the van if we needed to leave quickly, but thankfully the wind was in our favor and it never came closer to us.

It is still burning, though, and friends of ours are still re-locating their livestock in case they have to evacuate, so it's not over yet.

I could use a break now, okay, universe? Just . . . just lay off for awhile with the anxiety-inducing situations, please.