We attended an event at Cubby's preschool last night* that included a potluck dinner. I signed up to bring pork (and then ended up also bringing squash because I had cooked one of the enormous blue ones a few days earlier and figured I might as well share the bounty--and get rid of some squash). We had a pork loin roast in the freezer, all tied up nice and neat and ready for cooking.

So I made that. I sliced it all up, poured the sauce over the pieces, and put the whole deal in my Crockpot to keep it warm. Which is when I remembered that my Crockpot does not actually have a handle on the lid and was therefore not really useful for public purposes.

The plastic one it came with broke off long ago. A. carved a new knob for me a few years ago and attached it to the lid, but that eventually split from the heat and I just . . . never bothered to get anything else on there. So at the last minute yesterday I jerry-rigged a handle from aluminum foil so people could at least get the top off without just flipping it off with a fork.

A Crockpot with an aluminum foil handle. I bring the classy where ever I go.

Then, when we were all eating later, our friend Jodi, whose younger son also attends this preschool, told me the pork was really good. The string, not so much.

I forgot to take the string off when I was slicing the meat. It was a little hectic right before we left the house, with excited and hungry children racing around (and crying) and I was trying to pack up dishes and food and finish MAKING the food and I just totally forgot about the string.

I thought about making a general announcement of my ridiculous mistake to the room so no one would choke on twine, but I figured it would be noticeable enough that no one would actually eat it. Also, I didn't particularly want to publicly admit to my idiocy.

Not exactly my finest moment. I'll try to make sure the next time I provide food for a potluck, everything included is edible. Low standards: I am all about them.

* A celebration of St. Martin's Day, which is pretty cool and should be more widely celebrated in the U.S., in my opinion.
Posted by Kristin @ Going Country at 7:05 AM 7 comments:

Labels: all about me, fun with food, preschool, randomness

Twists and Turns (and Almond Meal)

Although I am an (over-) enthusiastic consumer of baked goods, I really do not enjoy doing the actual baking. So why do I find myself baking every damn week now?

Because Charlie has gone over to the dark side.

I am sad to say that my younger child seems to have inherited his father's digestion and can't deal with gluten. It makes for far too many diaper issues, so it's really easier to just avoid giving him anything wheat-related.

Except it's not very easy. Because what do you reach for to feed a kid that is relatively non-messy and good for self-feeding? Bread. Or crackers. Or pasta. Or . . . bread.

We're tried the gluten-free stuff. Not only is it not very good and sometimes loaded with weird ingredients, but Charlie just doesn't like it. He doesn't want to eat bread. He wants eggs. Or cheese. Or meat.

And I want to have something--anything--that I can grab one-handed from the counter and toss on his tray at 5:20 in the morning so I can make my coffee.

But we did have insane amounts of squash on hand, plus a huge bag of raw almonds. Almonds in the food processor make almond meal. Not quite as fine as the purchased almond flour, but good enough for pumpkin bread. Or, in our case, squash bread.

So now I bake almost every week, but instead of starting by whisking flour with other stuff, I start by pulverizing almonds in my food processor (which is HELLISHLY LOUD, OW) before dumping in the other ingredients and processing it all to oblivion. I also have to grease a non-stick loaf pan, because non-stick is not non-stick enough for this heavy, sticky kind of bread.

Look at me, all full of tips and tricks for almond meal baking.

Never in my life did I imagine I would spend any significant time fussing around with baking, much less to turn out a product I don't even particularly love myself, but such are the twists and turns of this surprising life.
Posted by Kristin @ Going Country at 4:05 AM 3 comments:

Labels: all about me, Charlie, country wisdom, fun with food

This morning as I was sitting in the chair by the woodstove with Charlie, letting him (and me) wake up a little more before facing the preparation of breakfast, I caught sight of Belle the Devil Cat slinking around the dining room. I just had time to think, "It looks like there's something in her mouth," when she flung her head and a dead mouse soared in a graceful arc halfway across the dining room and landed next to the woodstove.

The best part of waking up is a dead rodent at your feet.

But it doesn't end there! Oh no!

This evening after Charlie was in bed, the rest of us were once again all in the dining room--because of the woodstove, which is the only heat we have going at the moment--when we heard a thump and a squeak from the kitchen. Cubby, ever alert, demanded to know what that noise was. His query was answered visually by Belle running into the dining room with another mouse in her mouth.

I managed to tear him away from the riveting scene to pick up his toys in the other room in preparation for bed, but only by promising he could look at the mouse again when he was done picking up. He was duly rewarded for his diligence by another look at the grisly tableau, and then we went into the bathroom to brush his teeth. Upon exiting the bathroom, he requested that he be allowed to pay his last respects to the mouse before bed.

Except it had disappeared.

As I write this, Belle is stalking around the living room, presumably in pursuit of the injured mouse. It will probably hide in there somewhere, no doubt expiring in its hiding place, only to be discovered by Charlie or Cubby who will probably do something horrifyingly disgusting with it.

Because this, my lovelies, is Blackrock, and this is just the way we live.

Update: Just when you thought it couldn't get grosser . . . I heard a squeak from the living room, so I went in there to see if I could take the damned mouse away from Belle and make sure it wasn't lurking in the house anymore. It was hiding in a cardboard box on the floor. I caught a glimpse of it before it scuttled farther into the box. A. came into the living room, I informed him of the mouse's whereabouts, and he promptly stomped heavily on the box with his booted foot and then dumped the finally-dead mouse in the trash. Well. That takes care of that.
Posted by Kristin @ Going Country at 6:12 PM 6 comments:

And for my father in particular, who is a veteran and whose greatest entertainment in life is watching his grandchildren behave like the small children they are . . . 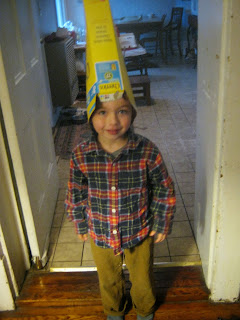 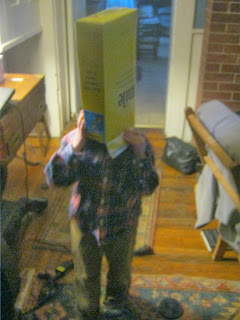 Cubby and his Cheerios box wish everyone a happy Veterans Day.
Posted by Kristin @ Going Country at 3:58 AM 3 comments: