Friday Food: Ham and Potatoes To Rule Them All

Long version: I didn't set out to re-create a Christmas celebration at the table, but then I hauled out the giant shank ham I bought on clearance at Cubby's request. And then I decided I should cook the fresh cranberries he had also requested I buy. And of course, we have potatoes.

So I baked the ham for hours--it was like 16 pounds, so it took awhile--slathered in my last half-pint jar of the overly-sweet rhubarb sauce I canned at Blackrock years ago. According to this very blog, four and a half years ago, to be exact.

For the cranberries, I simply simmered them until they were soft with water, sugar, and the last bit of apricot jam from a jar in the refrigerator, then mashed them with my potato masher and cooked it all until it was thick.

I made a huge pot of boiled potato chunks at A.'s request. Literally my largest pot full of about ten pounds of potatoes. For this meal, I just put some of those chunks in a bowl and heated them with butter, salt, and pepper.

Amusingly, it snowed most of the day and every single family member was randomly wearing either red or green. I found this more entertaining than I should have.

Good dinner, though. And we had a few leftovers. 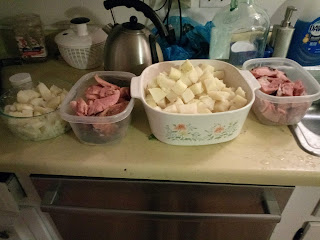 Long version: Also like Christmas, it's time to get creative with leftovers! Although it's not really necessary to get too creative with any combination of ham, potatoes, and cheese. It always tastes good. I did add some garlic, though, which was a good addition.

Long version: I finished up a bag of masa while I was mixing the dough for the tortillas, but I added a wee bit too much water. I knew as I was mixing it that it was a little too wet, but I didn't want to open a whole new bag just for a quarter cup of masa. So I didn't, and guess what? My first tortilla stuck when I pressed it.

So then I had to scrape that tortilla off and then open the new bag for that quarter cup while the griddle pan was already hot and starting to smoke.

There's a lesson there. Take from it what you wish.

I asked Cubby to make the cookies. I didn't even go in the kitchen because he wanted to do it himself. The cookies have all of four ingredients, so I figured he'd be okay. The only snag was that he didn't line the baking sheet with parchment paper.

He also didn't take them out when he should have. I was out with the younger two, trying to coax them to walk back home after both of them had separate meltdowns on our "quick walk," so I wasn't in the house to tell him the cookies were done. Thus, they were, ahem, extra crispy.

They were still all eaten, though. 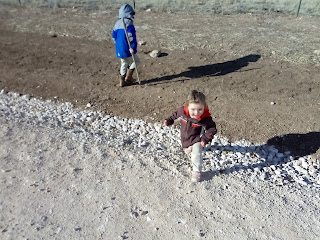 I wish I could borrow even a tenth of her energy.

Long version: Diced ham, mushrooms, onions all fried together in butter until the ham was crispy.

So nice when everyone is happy.

We didn't go a day without potatoes: A. ate potatoes with his ham instead of the bread. And I actually had to cook another ten pounds of potatoes this day. We sure can plow through potatoes when they're already cooked.

Break for random photo and an appropriate song: 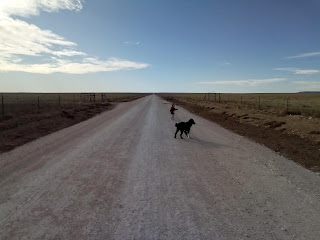 Don't fence me in.

Long version: I had taken out a large bag of elk the day before that didn't thaw in time for me to do anything with it Tuesday. I told A. it was in the refrigerator and if he felt like it, he could make something with it for dinner while I was at work. Otherwise, eggs for all.

He made a stew with elk chunks, garlic, dried red chiles, and potatoes that was a bit too spicy for the children. They all ate it, but did note the heat.

Long version: I cherry-picked some of the elk out of the stew and fried it in a skillet with plain cooked potatoes, garlic powder, and paprika, then added cheese to make something a bit more palatable for the children. A. ate more of his stew. I ate a salad with some of the elk meat in it.

Didn't we just have carrot sticks the day before? Yes, but this time I made ranch dressing to dip them in, so obviously, they were fancy carrot sticks.


All day, every day. 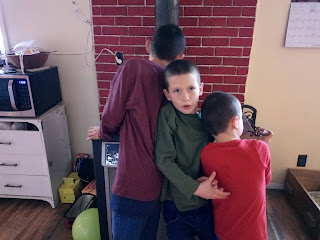