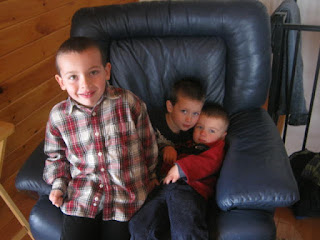 Happy Thanksgiving, my lovelies. Eat up.

Unless you're going on a tropical vacation in the winter, packing for winter travel involves a whole lot of stuffing overly-puffy outdoor apparel in a too-small suitcase. 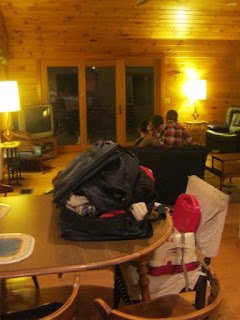 You may also enjoy the background shenanigans that is A. trying to watch Cheap Truck Challenge on the computer with all three boys using him as a jungle gym.*

In addition, A. spent five straight hours shoveling this morning so we could actually drive our car out of our driveway to get to Blackrock for Thanksgiving.

I'm sure the pies will be worth it, though.

* P.S. This is the view from my kitchen. In case you were wondering what my perspective is in this house, it is this. The view from the kitchen, my permanent station.

Labels: the A team, the great white north, travelin'

You Be the Judge

So how much snow did we get? Well, let's see. 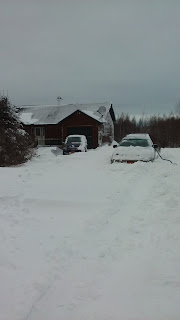 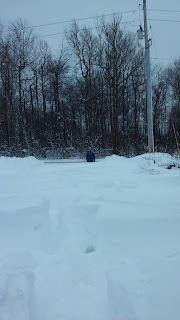 Cubby didn't have school yesterday--no surprise, considering the howling blizzard--but he did have to get to the road to catch the bus today. A. went out at 6:30 a.m. to start shoveling the driveway. He shoveled it out yesterday, but the continuing snow and, more importantly, the wind blowing drifts, had covered it over again.

He did make a large enough spot at the end for the bus to turn around, but the driver elected to just keep going and presumably make a loop to stay on the plowed surface of the road.

The drifts between our house and the road were deep enough that A. actually carried Cubby part of the way to the side of the road to wait for the bus. A. is still outside shoveling, trying to dig out the van so we can leave for Blackrock tomorrow.

I don't even know how much snow we got--18 inches maybe--but I think it's safe to say our winter snow pack has begun.

Labels: Cubby, the A team, the great white north, weather


It was 63 degrees and sunny on Saturday. This was appreciated in November, especially as our forecast let us know in no uncertain terms that Winter Is Coming. Specifically, two days of snow accompanied by frigid temperatures and gusting winds.

Better make hay while the sun shines! Or, in our case, pull up the sole remaining beet in the garden.

And such a beet. The biggest beet I have ever seen.

I set Cubby and Charlie the task of pulling. 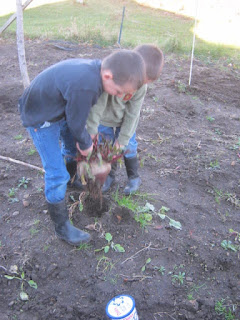 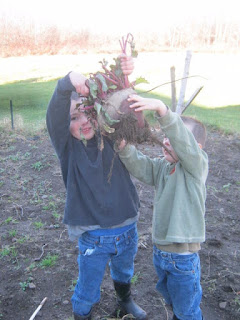 Gallons of borscht, right there.

After considering this behemoth for a second, Charlie asked "Mommy, is it as big as my head?" 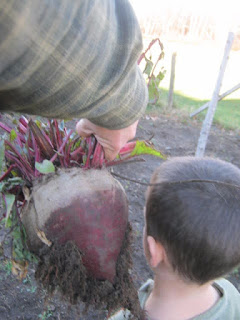 Yup. (This is not a trick of perspective, by the way.)

While we were in the garden, we shoved in some peach and plum pits that we had saved into the soil to see if they'll sprout. If they do, then maybe we can transplant them and grow some fruit trees. Kind of a long shot, but it doesn't hurt to try.

Next I gathered some of the last apples on one of the trees in the back to make some apple cider vinegar. Then some more wild grapes to add to some feral apples I already had for a last batch of apple-grape jelly.

We spent some time picking up outside and making sure anything that we didn't want covered by snow was under cover. I pulled the snow shovel out of the barn and set it right next to the front door.

This morning at 5 a.m. when I went outside to let Mia out, I opened the door to this: 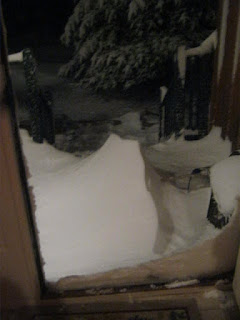 I particularly like the snow that blew against the door and formed a little ridge to step over. And the wind-sculpted foot-deep drift on the porch.

I can't even tell how much snow has fallen, thanks to the wind blowing it around. Several inches, for sure. But we have applesauce, jelly, vinegar, and one ENORMOUS beet. Bring on the winter.


A friendly bit of advice, my lovelies: Should you wish to soften your refrigerated butter a bit for your husband, who just the night previously had said we must be sure to have soft butter in the morning for waffles as nothing ruins waffles more than hard butter chunks that won't melt into the waffle, do NOT put two sticks of butter on top of the coffee maker "for just a second" while you make your coffee.

At least it didn't get it into my coffee. And it wasn't quite as bad as the time the jar of maple syrup tipped over and spread a cup of maple syrup across a whole shelf of the lazy susan.

But still. Don't be like me. No butter on top of the coffee maker, okay? Okay.

Carry on.
Posted by Kristin @ Going Country at 4:23 AM No comments: