A Round of Applause for Karen.

You see that cool header there with the photo and the nicely placed text in my favorite color?

I did not do that.

I wanted to do that. I tried to upload that photo into my new theme in Blogger, but it wouldn't re-size automatically, and then I was all, "Okay, that's that," and I gave up.

I am really, really not a tech person. More like a Luddite.

But then! Karen., who is a professional design person, and a regular reader here, and also someone I have never met in real life, offered to help me design a header.

Perhaps it was apparent that it desperately needed to be done, and that I was not the person to do it?

I provided that photo--which was actually taken by me and shows the pasture across the road from our house--but she did everything else. A few e-mails and questions later, and she sent me that nicely designed header in a file that was all ready to go and upload to Blogger. Just like that! Like it was easy! Because it was. For her.

We can all thank her for providing us with something pretty to look at up there, instead of just the boring old template that I would definitely have left forever and ever.

Thank you, Karen., for saving me from my own technical ineptitude. We all appreciate it.

(I know! I changed it AGAIN! That light blue and glaring white background were bugging me. I make no promises I won't change it again, but I think this is better. Feel free to weigh in if you care.)

Long version: This was the night we got home late from the bull butchering. It was 6:53 p.m. when we walked in the door, and of course everyone was starving.

Except for me. Handling hundreds of pounds of fresh raw meat has a dampening effect on my appetite.

No one else seemed to be affected that way, however, so I immediately went into the kitchen to make the fastest dinner I could. Luckily, the meat I had taken out of the freezer earlier to thaw was boneless, skinless chicken thighs my mom had brought us. Those cook relatively quickly, especially because I cut them up into smaller pieces after they had browned in bacon grease. I seasoned them with some random spices after they were in the pan.

Then I dropped the full container of tomato sauce from the top shelf of the refrigerator, creating a tidal wave of sauce that mostly landed on my shoe and the floor. Super.

Luckily, the container landed right side up with some sauce still in it, so I used some of that for the chicken.

Leftover rice, green beans from the freezer, and we were eating by 7:15 p.m. Shockingly late for us, but the best I could do.

Long version: I am not one to do holiday-themed meals, because, as you know, I am not a Fun Mom. My sister, however, IS a Fun Mom, and Halloween is her favorite holiday. When she was here a couple of weeks ago, she brought some black pasta (made of soy, although I don't know why soy is black) so we could make a Halloween dinner.

I'm sure she would have done something more creative with it, most likely involving dry ice and meatballs made into eyeballs or something, but since she left it to me, this is what the kids got: 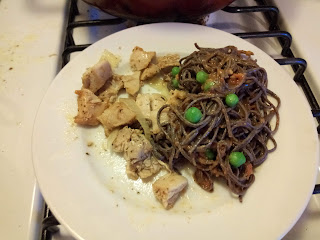 Oooo, spooky!
I called it graveyard pasta with blood (the last of the unspilled Finny's sauce) and alien eyes (peas, obviously).
Sure. Best I could do, Sis.
Anyway, they seemed to appreciate the effort, and they ate it. Along with the last package of chicken thighs that I cooked with an onion and some banana and bell peppers from the garden.

Long version: My mom had brought these pork chops that were seriously at least an inch and a half thick. My sister suggested that they're mostly used for butterflying and stuffing, which is a nice idea, but I just cut them into chunks and fried them in bacon grease with salt, pepper, garlic powder, and paprika.

Not as fancy as stuffed pork chops, but faster and still tasty. Which is pretty much my cooking philosophy in a nutshell.

Break for a photo of a much fancier chef than I am: 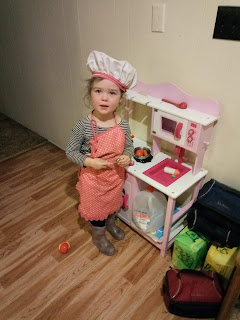 Long version: More of those extra-thick pork chops cut up again, this time for stir-fry. I had actually cleverly cut all the pork up at the same time, and then put some in a container with marinade for the stir-fry the next day. Because stir-fry does not happen on a workday without previously prepped meats and frozen vegetables. Which is what I used for the vegetables, along with some of the leftover steamed carrots and broccoli.

Long version: And here it is! The first of many, many meals featuring bull beef. For the first time cooking it, I did it as plainly as I could so I could gauge the tenderness and flavor. So I just pulled out a bag labeled "steaks,"* sprinkled them with some steak seasoning, and seared them on a very hot griddle pan in bacon grease.

I was pretty sure tenderness--or lack thereof-- was going to be the main issue, so I cooked them about medium rare, then sliced it thinly. Then I put the pieces back in the pan and added some butter to make a sauce, because it's very lean meat.

The taste was very, very good. Any of the pieces that got even the least bit well done or weren't sliced thin enough were indeed too tough, but I can work around that. It's basically like cooking London broil, which was a cut of meat that always seemed to be on crazy sales when A. and I were first married, and which I cooked a lot. So I feel like I'm on familiar ground here.

Long version: The day before, I had made two pans of roasted tomatoes and garlic and turned that into Finny's sauce. I had some cooked calabaza hanging out in the refrigerator, so I sneakily threw that into the food processor along with the rest of the sauce ingredients.

While I was at it, I figured I might as well go all out and just make something ahead for the Wednesday Workday dinner. So I boiled some pasta, mixed in the sauce and a LOT of shredded asadero and Parmesan cheese, topped it all with yet more cheese, and stuck it in the refrigerator.

Long version: Just plain ol' ground beef tacos. And not crunchy tacos, either. We can't be fancy all the time.

* Our sorting system when butchering is very minimal. Depending on the size, there are bags of roasts, steaks, stew meat, stir-fry (cut thinner than stew meat), and chili meat (the roughest stuff chopped up). That's it. We are not professionals, obviously.

Yes, I also hate it when things change on me without warning.

But Blogger is the one that changed everything, and they keep pressuring me to change my format, and things are getting kind of wonky in the formatting department here (perhaps you've noticed), so I just did it.

What do you think? Better? Worse? Vote now!

Oops. I didn't mean to use the "v" word. Still ignoring the elephant and donkey . . .

Today, I am completely ignoring the elephant--and the donkey--in our national room and purposely not looking at any media content relating to elections.

I actually hadn't yet cooked any of the meat from the bull we butchered on Friday, but I took some of the steaks out of the freezer last night to thaw and fried a small test piece this morning.

I know it seems obvious that a bull would taste like beef, but I've been eating home-butchered animals long enough to know that there is huge variation in the taste of meat even from the same kind of animal, depending on its age, sex, sexual maturity, manner of death, how long the carcass ages, and on and on and on.

I was afraid that this animal, which was a mature male that has been breeding for the past three years and was butchered quickly and very roughly, would be strong-tasting.

It wasn't. So that's a relief. Although it will be sort of tough, I think. No problem, though. I've spent my entire adult life learning how to cook tough cuts of meat (because those are the cheapest ones, of course), so I feel capable of handling this meat.

I feel now would be a good time for a completely unrelated photo: 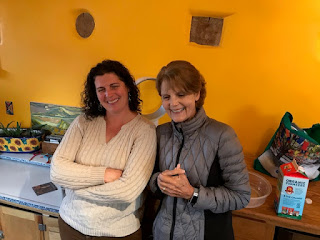 I can't remember the last photo of me that I posted here, but my sister took this when she was here for Poppy's birthday, so here I am. With my mom, not looking at the camera. I think we were looking at one of the children, who was obviously being amusing.
Also related to the bull and butchering, I finally cleaned out the gross, bloody coolers today. The ones that we transported the meat home in.
Yes, I should have done it immediately, but man, I was exhausted this past weekend after all the activity related to butchering and all the other things I usually do (mostly laundry and a lot of food prep), and then I worked yesterday, so I didn't get to the real scrubbing until today.
I did at least rinse them out, so there wasn't actually flesh stuck to them or anything, but I still had a lot of scrubbing--with water, with vinegar, and with boiling water--to do until they weren't totally nasty.
This is the hidden labor of butchering. The cutting itself is arduous, of course, but so is all the prepping and cleaning that goes into having clean, accessible meat in a freezer.
Anyway! It's all done now and the coolers are getting further sanitized out in our strong New Mexican sun.
Let's pause here for another random photo: 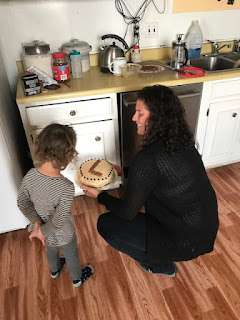 Hey look! There I am again! This time showing Poppy her birthday cake.
In addition to scrubbing the coolers, I have also done three loads of laundry (and hung them on the line, of course), made spiced almonds, roasted two pans of tomatoes to keep ahead of the many green tomatoes that are slowly turning red, rinsed out the outdoor trashcans, watered the animals, and cared for Poppy.
I am not lacking in distractions, anyway. Which is lucky on a day like today.
So, tell me: What are you up to today?
Posted by Kristin @ Going Country at 9:29 AM 8 comments: