Last summer, I did not plant a single tomato seed. In fact, I didn't plant anything at all. This was a particularly wrenching decision, because that very spring I had been sent several packages of tomato seeds saved and stored by my good Internet-friend Finny.

She lives in California and actually farms for a living now, but this was before she was a farmer and she had an amazingly prolific and well-cared-for backyard garden from which she got impressive quantities of tomatoes. And then she saved the seeds. And then she packaged them up all pretty in little special envelopes with photos on the front of each variety and description of the fruits.

It was all very efficient and exact and totally not the way I do things. Finny's a nice friend to have.

But then I didn't plant anything. So the seeds sat in my freezer, patiently waiting until I got off my ass and had a garden again.

This spring, I did. Thanks largely to Cubby's enthusiasm for planting tomato seeds, we started quite a few in the spring and got the plants in the ground in due time. A. had to surround them with fencing to keep away the aggressive deer, and they set quite a lot of fruits.

Then we moved. All those poor tomatoes, abandoned at the very cusp of ripening.

However! All those trips A. has been taking back to Blackrock, while challenging for me, do result in him bringing back large quantities of produce from the garden. The MiL certainly can't eat it all, so every time he comes home, he brings me something from the garden.

When he pulled up yesterday, he unloaded a box of tomatoes and an entire Styrofoam cooler totally full of basil. 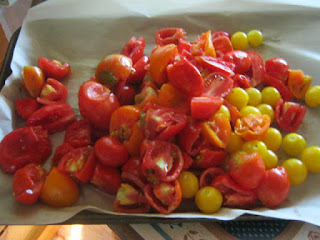 They look pretty good after their long journey, don't they?

Of course, a box of Finny's tomatoes must be made into Finny's sauce. So they were. And it was good.

Labels: all about me, friends, fun with food, gardens, moving, the A team, The Tomato Crazy

Allow Me To Unburden Myself

One of the biggest challenges to this relocation for me has been the fact that for much of the week, I'm alone with the kids here while A. goes back to Blackrock to work on closing out his work in that county. He's gone for three or four days (and nights) during the work week and, as I know you will have guessed, this sucks an awful lot.

It's not so much that I'm the sole caretaker for them, it's more that they look to me for entertainment and, well, I just don't do that as well as A. does. This is mostly a problem for Cubby, of course, because he's the oldest and the most enthused about the things that A. does with them. Things like fishing or exploring or helping them build forts. I'm not likely to do these things even if I didn't have a 20-month-old child to haul around, but I'm definitely not going to do them while hauling said child.

A. leaves Jack behind with me when he takes Cubby and Charlie out for adventure. I don't have that luxury, and so I am the Worst Mom Ever.

Someone is always screaming or crying. Sometimes it's me.

All this to say that I feel a little stressed out pretty much all the time and I feel like I should be doing something to make this easier, but I really don't know what.

I take them somewhere almost every day--the pool or the playground or the library--which sometimes seems more trouble than it's worth, what with Jack's frequent need to sleep, Charlie's frequent meltdowns, and Cubby's frequent sulking because wherever we go isn't as fun as fishing with Daddy.

And then we get home and everyone's hungry and I have to make something for dinner with three kids screaming and crying and throwing things down the stairs and WOW, DID I MENTION THIS SUCKS AN AWFUL LOT?

I really do not think this is going to rank right up there as a fond time in my memory. I feel like I'm somehow failing, but then I remember that I'm still making yogurt and bread, doing laundry, sweeping the floor multiple times a day, reading hundreds of pages of books over and over and OVER (another phase Jack is in, which is at least significantly less destructive than pounding on the walls with wooden toys), walking to the neighbor's house to feed the chickens, taking everyone to run on the nearby dirt road, stopping for ice cream sometimes, and in general doing the best I can.

Sure will be glad when this transition is over, though.

Labels: all about me, Charlie, confessions, Cubby, Jack, randomness


When A. told me that the house we're renting had a vegetable garden, I was all excited. Then the landlady told me we were welcome to whatever was in the garden, and I was overjoyed.

But when I got here and inspected the garden, I realized that although there are a few tomato plants, a couple of underwhelming pepper plants, some beets, and about half a dozen snap bean plants, the vast, VAST majority of the small garden is completely filled with cucurbits.

There are a few winter squash plants--mostly some variety of butternut squash--that I was pleased to see, and I can sort of deal with cucumbers because we like eating sliced fresh cucumbers with vinegar and salt in the summer and pickles all the time, but zucchini? I am mostly ambivalent about zucchini. And those yellow summer squash? Nope. What's the point? They have no taste that I can discern.

And yet, of course, cucurbits are the most prolific of plants. We have been absolutely overrun with summer squash and zucchini. The brushy area next to the garden is littered with cast-off summer squash, because I gave the kids permission to pick any they see and have contests to see who can fling them the farthest.

I've made some half-hearted attempts to cook the zucchini, but only A. and I will eat it, and we're not really that enthused about it. Which pretty much leaves me with zucchini bread. The children will eat that form of zucchini. Of course they will, because it's just a kind of cake with token shreds of zucchini. This means that I use about one zucchini a week by mixing it with large quantities of flour and sugar. That leaves me with, oh, about a dozen zucchinis in a week that I'm not using.

I might freeze some for stealth chili additions in the winter. Or I might just let the kids use them for bow and arrow target practice. Probably that.
Posted by Kristin @ Going Country at 11:46 AM 9 comments: