Long version: Cubby and A. were gone this night. They drove over three hours so Cubby could attend a hunter education class and get his hunting license. The class was two days, so they stayed overnight. I had to pack all their food, as the town the class was in only has one restaurant, and it closes at 3 p.m. Their motel room had a refrigerator and microwave, though, so they had leftover taco meat with tortillas and cheese.

I had to take the other kids with me to the tiny store in the village because we were out of basically everything--even cheese, which is pretty much an emergency in our house--so I got a package of the sausage links the boys love. I had some leftover steak and vegetables, because I do not love sausage links.

Long version: "Casserole" means an opportunity to exercise my kitchen creativity. Otherwise known as making it all up. This was a good one, though, so I will write it out here so I remember what I did. And then you also have the benefit of one of my dubious "recipes."

You are so welcome.

Okay! So, three pieces of bacon diced and fried to render the fat, then removed from the skillet and most of the fat poured out of the skillet. (And saved! Never throw out bacon fat.) Then three pounds of ground beef browned, one chopped onion, three cloves of garlic (there sure are a lot of threes in here), three (another one!) medium potatoes grated, about a tablespoon of Worcestershire sauce, some random leftover tomato juice (maybe half a cup), two tomatoes left in a can that I diced up and threw in there, a few tablespoons of ketchup, and a couple of tablespoons of Dijon mustard. I added some water and simmered all of this until the potato shreds were pretty soft, then spread it all in a Pyrex pan. To that I mixed in two eggs beaten with a bit of cream, sprinkled the bacon on top, then four ounces shredded extra-sharp cheese and some fresh ground pepper. Baked at 350 degrees until it was bubbling and the cheese was melted.

Everyone liked this. Charlie--Charlie!--said it was "very good," both he and Jack ate two helpings, and even Poppy ate a shocking amount of it. Winner.

Also, while I was putting this together in the afternoon, I decided it was the perfect time to paint the weird former pass-through right above the kitchen sink that is now boarded over. No sense just standing around while the bacon renders, right? 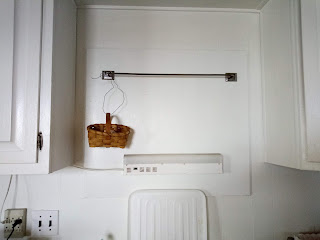 They say you should live with your house for awhile before making any changes. I say living with that institutional fluorescent light and a towel rack meant for a giant for almost two months was about two months too long.

You can see why I was so motivated to do something about that situation, even if that something involved painting in the same kitchen I was cooking in. 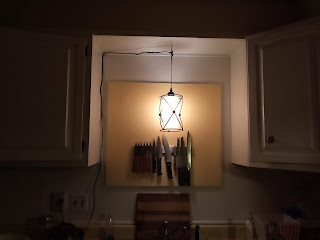 The lamp is not actually dented on the right side. Must be a trick of the light. Also, do you like how it highlights the row of knives on my new magnetic strip? A bit demented in several ways.

And I didn't even get any paint in the food! My multi-tasking medal is on its way, I'm sure.

Long version: Another Sunday, another dessert. I used this recipe for the brownies, and I will totally endorse it. The reason I approve of this recipe is . . . well, there are several reasons. For one, it only requires one bowl. For another, it only calls for cocoa powder, but makes very rich and chocolatey brownies. Hooray for no chopping of chocolate. I HATE chopping chocolate. And lastly, it makes a reasonable quantity of brownies. I do not need a 9x13 pan of brownies. NO ONE needs a 9x13 pan of brownies, unless you're making brownies for a party, I suppose.

Do note, however, that there is no leavener in the recipe, so if cake-like brownies are your thing, this recipe is not for you. These are very dense and more fudgey.

Anyway. They were easy, and good, and I'm going to write that recipe down for future reference. Two of my personal notes: I had to bake them for about 40 minutes before they were done, instead of the 25 minutes suggested in the original recipe. Part of that is my high altitude, though. And despite the recipe stressing to use the best possible cocoa powder, I used Hershey's because that's what I had, and they were still good. I'm sure they'd be better with better cocoa powder, but don't be deterred if you don't have Valrhona or whatever on hand.

That was a lot of words about brownies. All you really need to know is that they were crowd-approved. 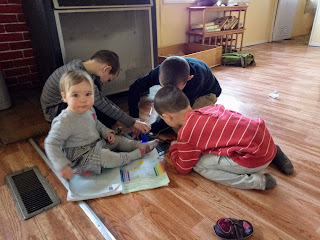 And here the crowd is, working on retrieving a tiny Lego piece that fell in the heating vent. They got it in the end, only to eventually lose it for good when I found it one too many times in Poppy's mouth. Stick with the brownies, baby. They taste better and are much less likely to choke you.

Long version: I didn't have any cabbage, but I did have two green apples that Charlie had asked me to buy at the store. So I just used one grated apple and three grated carrots with my usual coleslaw recipe. It was a bit sweeter than regular coleslaw, but everyone except Cubby really liked it. Yes! Cubby this time, not Charlie! These kids like to keep me guessing.

Long version: I had to take Jack back to the clinic in the larger village for another try at getting his four-year vaccinations*, so we went to the grocery store while we were there, obviously. And I bought one of those plastic containers of pre-washed organic baby spring mix.

I do not ever buy those plastic containers. The greens never taste very good and always seem to be just on the verge of rotting. Plus, plastic makes me unhappy. It was a moment of weakness, perhaps brought on by the proximity of so many lettuce plants in my house that I can't eat yet. My options for lettuce at the store were romaine--which seems to constantly be the subject of e. coli alerts--iceberg, and this seemingly out of place organic spring mix. It looked completely unwilted, so I took a chance on it. It was okay. Better than iceberg or e. coli, but I really can't wait to have my own lettuce in my backyard.

Now I need to find a use for the plastic container, too. Maybe I'll use it to start my basil seeds.

Long version: I started to feel a cold coming on, so of course, I immediately made some soup. Cubby comes by his love of soup from his maternal side. This soup was bacon, onion, garlic, celery, carrots, tomato juice, vermouth, collards, cabbage, potatoes, and chicken stock.

I ate mine just with cheese--extra-sharp cheddar, and thank you, Cracker Barrel, for distributing good cheese so widely that I can even find it at the tiny grocery store near me. The rest of the family was going to get eggs, but then I discovered A. had brought back almost all of the taco meat I had packed for their weekend overnight trip, so they got to have tacos instead. Lucky them.

Long version: Still sick. All my soup got eaten and it's all gone now, though. Bummer.

*  We were only partially successful, as they were out of one of the vaccines he needed. So we have to go back. That's another 120 miles roundtrip. I was very not pleased about this.


This evening as I was doing dishes, I heard an odd whooshing sound and turned around to find Cubby pulling Poppy through the kitchen in a big box.

"That's a good big box for her," I remarked.

"It's her jail," he replied, continuing to haul her into the living room. He parked her there in her jail-box and he and Charlie spent some time taping up any escape routes. 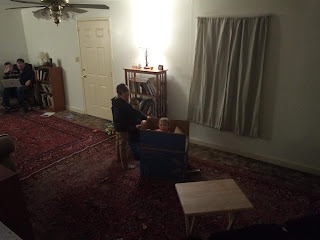 This didn't seem to concern her unduly.

I had to ask what she did to get in jail.

Charlie: She didn't pay her taxes. For her job.

Me: Her taxes? For what job?

Me: Ah. She's a pilot who didn't pay her taxes. Better let Uncle Jim* know what happens to pilots who don't pay their taxes.

Cubby and Charlie took turns patrolling past the jail, adding some home comforts for the pleasure of the tax-evading baby pilot. 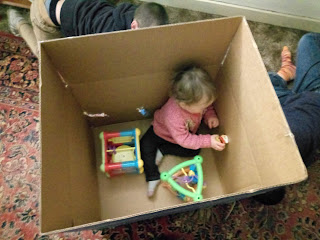 Happy prisoners are easier to control, you know.

They also constructed a perimeter wall to foil any escape attempts. And gave her a flashlight. 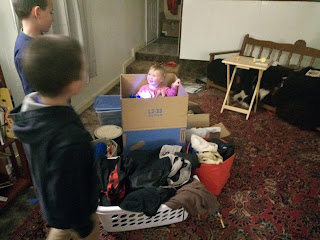 Obviously a pleasing addition to the cell.

I must say that the baby being held prisoner in the box that formerly contained her diapers seems very appropriate.

Just a Tuesday night with kids.

* My brother is an airline pilot. He's very scrupulous about paying his taxes, though, I'm sure.

And So It Begins


With each of my pregnancies, before we knew if we were having a boy or a girl, A. and I would inevitably have the discussion about hair. A. had some reservations about my ability and interest in fixing hair if we had a girl, you see.

He was justified in those reservations. I have very little interest in doing hair, and certainly don't have any skill at it. I can barely manage a regular braid, much less French braids or fishtail braids or any of that other craziness*.

Obviously, this was not an issue for many years. I had three boys, and those three boys all get their heads shaved every month.

But now, of course, I have a girl. And that girl's hair is starting to get a bit long.

A couple of weeks ago, I bought a package of hair ties, barrettes, and bobby pins at the grocery store--for a dollar, because I am allll about the quality--and this morning before church . . . 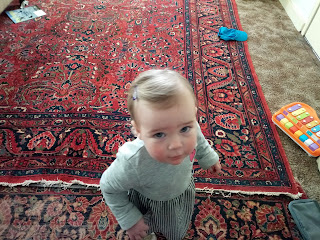 Can you see it? Do you need a close-up? 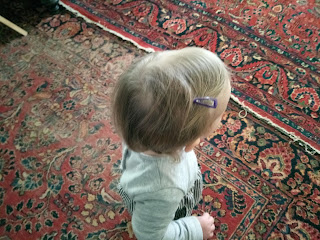 I done FIXED that hair. With a purple barrette.

Okay, so it's a pretty lame attempt at hair styling. But hey! Points for combing her hair and putting something in it to keep it off her forehead, right?

Right. I see many YouTube tutorials in my future.

* These conversations would usually end with me semi-jokingly telling A. that maybe he should be the hair person. I suspect he'd probably be better at it than I would.