Cubby continues to enjoy his time at preschool. So much so, in fact, that he's started going on Tuesdays as well as on Wednesdays and Thursdays.

Thankfully, his teacher, whom I like very much, seems to appreciate his more, uh, unusual personality traits. At least I think she does. When I picked him up yesterday, she told me he always has the best ideas*. And then she said, "Sometimes I just look at him and think, 'Is he from the Middle Ages or something?'"

I think that was meant as a compliment. I hope so, anyway. And if it isn't, I'm not going to ask what she meant because I don't want to know.

* She was kind enough not to mention how he tends to be somewhat forceful in his insistence that HIS ideas are the ONLY ideas worth considering. Perhaps she figured I knew about that already. Or perhaps every three-year-old is like that, so she doesn't even pay attention to it anymore.
Posted by Kristin @ Going Country at 10:50 AM 5 comments:

There was a day last week when Charlie was all about doing this: 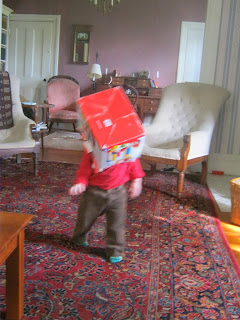 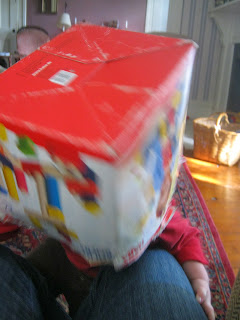 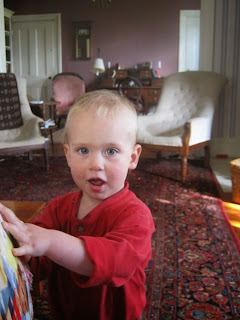 And I almost made myself ill laughing at him.

Then, later that same day and completely independently . . . 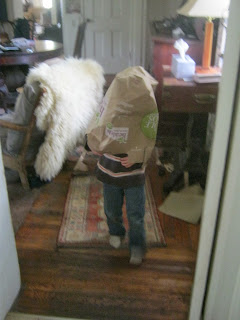 Cubby went with a bag instead of a box, but same idea. 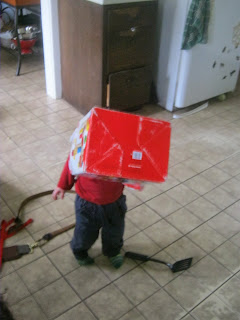 Needless to say, this was one of the more entertaining days I've had recently.
Posted by Kristin @ Going Country at 6:12 AM 5 comments:

Is there a child in the world who can resist the loud, joyful noise of popping bubble wrap? None that I've met. My children are no exception, so when the MiL got a box with a sheet of bubble wrap in it, Cubby commandeered it for a good popping session.

It had nice big bubbles on it, which of course make the best noise and are also easier to pop, so I figured he'd manage okay. But after a minute of no popping, he brought it to me requesting help.

Which is when I discovered the existence of un-poppable bubble wrap.

Yes. There is now a kind of bubble wrap in which the bubbles are all interconnected in horizontal rows, so instead of being able to squeeze the bubble hard enough that the pressure makes the plastic pop, the air is just pushed into the next bubble in the row, thereby rendering it un-poppable. What a screw.

I don't know who is responsible for this "innovation," but I can only hope it doesn't catch on. Because un-poppable bubble wrap is an abomination. And no fun at all.
Posted by Kristin @ Going Country at 5:57 AM 4 comments:

In the Library at Blackrock

We have a room in our house that is called--somewhat grandiosely and inaccurately--the library. It is not, as the name would have you imagine, a large room filled with floor-to-ceiling bookshelves on many levels, with one of those movable ladders to reach the upper shelves and big leather chairs and a fireplace that's always burning and Oriental rugs and . . . well, and all that.

I've always wanted a library like that. But it's probably a good thing I don't have one, because I also don't have any servants. And with no servants, who is it who has to remove every damn book from the shelves, dust them all individually, and then scrub the shelves?

Yup. That would be me.

So it's a good thing our library is just this*: 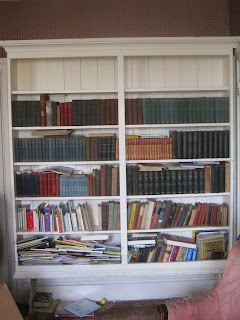 Seriously, where are my servants? What a mess.

The top shelves are all very old books that have been here since the world began. Or at least since the turn of the 20th century. I know we have some rare and valuable books in there, probably more than I know about, actually, and they should really be taken care of more. Or, uh, at all. They're never actually read, which means they just sit there collecting dust and making it really difficult to clean the shelves.

The bottom shelves hold the children's books, so at least those shelves have been cleaned recently. The top shelves, though? Never cleaned since I've lived here. And that's over seven years now.

So I steeled myself for an alarming amount of dirt and dove in.

First I removed the books from the top shelf and dusted them all individually with a damp rag, putting them on the dining room table as I finished. 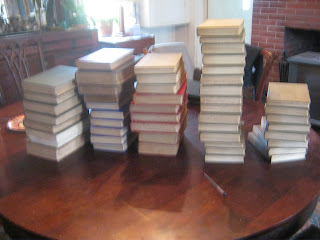 You can maybe imagine the layer of dust on the top edge. Or maybe you can't. Gross.

This part was accomplished while Charlie ran around downstairs pulling the phone off the hook, climbing up on the kitchen table, chasing the cat . . . you know, the usual.

Then, when he went down for a nap, I hauled in the ladder.

It is possible I could have reached the top of the shelving without using the ladder, but I wouldn't have been able to see what I was doing. And I really, really did not want to reach up there blindly. For all I knew, there would be a mummified mouse or something up there. We have a history of unexpected rodent carcasses, you may remember.

Only five more shelves and about two hundred more books to go! Yay.

* This is but a small fraction of books in our entirely-too-literate household, which is why it's kind of dumb to call this the library, as if all the books we possess are in this one room.