Long version: We always buy corn tortillas and I microwave cheese on top for a cheater's quesadilla. The boys put their scrambled eggs inside the cheesy tortillas for a kind of breakfast burrito.

Long version: The tomato sauce was the leftover pizza sauce from last week, with a little cream added. Because cream makes everything better.

Long version: Yes, we ate cheeseburgers for Easter dinner. I'm the cook around here, and I do what I want. Plus, grocery store ham is wet and gross.

I made hamburger buns for a special treat, though. We usually just eat the patties without buns. I used this recipe, but with all white flour. I made 3/4 of a recipe, because I only had one egg left on Friday night, when I needed to start the fermenting process. Stellar planning, yes. I was going to make a half recipe, but it didn't really look like enough, so I just figured that extra 1/4 of the recipe would be okay without another egg. It was. Yum.

The french fries were also special, because instead of making everyday oven fries, I did the full-on frying in a cast iron pan. I used this method. 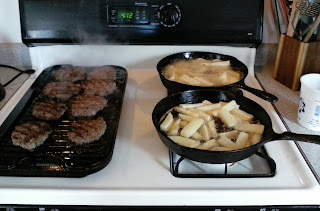 We ended up having a taste test, because I only had enough lard and tallow for one 12-inch pan full of fries, so I did another 12-inch pan with canola oil. A. tasted them blind and actually misidentified which was fried in tallow. So there you have it. Use whichever one you have. They both (or rather, all three) make kick-ass french fries.

I only had grocery store beef, so the burgers were nothing special, though I did make "special sauce" for them with mayonnaise, ketchup, and finely diced shallots. The shallots were the best part of the entire hamburger, in my opinion.

I would always rather have a (chocolate) milkshake over pie. And milkshakes are way easier to make. Even if your blender breaks halfway through the blending and you have to finish in a food processor. Ahem.

Other than some token romaine lettuce on the hamburgers, we didn't have a vegetable. I figure if my kids consume an entire "milk chocolate flavored" bunny each at 7:15 a.m., the day is pretty much a loss nutrition-wise anyway.

Oh, and look! I took a picture! Of our actual food! 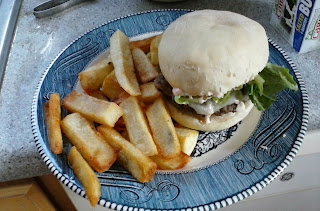 Look at me, all food bloggy and stuff.

Long version: I had some ground beef left over from Sunday, so I browned it with diced onion, dumped in barbecue sauce, and served it on the last three buns also leftover from Sunday. Boom.

There was half an onion left after I made the sloppy joes, and I hate storing onion in the refrigerator (so smelly), so I sliced it and cooked it with broccoli and carrots in the pan still on the stove with bacon grease in it from making eggs in the morning.

Long version: When I have large pieces of lean meat like London Broil, my preferred way of cooking it is to sear it in a cast iron pan until it's nice and crusty, but still pretty raw in the middle, then take it out and put it on the cutting board while I make a sauce. Then I slice the meat and add it right back into the sauce to cook a little more. The meat gets coated better that way, and I don't have to worry about overcooking it when it's a whole piece.

The sauce this time was diced shallots, whole grain mustard, a little water, and heavy cream.

Long version: You may have noticed that this is the first time since I've been doing these posts that I have ever cooked chicken. That's because I never buy chicken. I find chicken to be kind of a grody meat in general to deal with, and that goes double for grocery store chicken. The kids like it, though, and I happened to be at the grocery store yesterday where chicken thighs were on sale, so I got a package. I just seasoned them with salt and random Italian seasoning mix, put them right on top of a pan of carrot and potato chunks, and roasted it all along with another pan of bell peppers and onions.

The beans are so easy, but so good. Quickly cook a couple of cloves of mashed garlic in a couple of tablespoons of olive oil, add a can of rinsed and drained cannellini beans and some kind of herb (thyme, oregano, basil . . . this time I used the same random Italian herb mix). When it's all heated, it's done. I love these. So do Cubby and Jack.

Long version: After I browned the pork chops in a cast iron pan on the stove (salt, pepper, garlic powder, and lots of paprika), they went in the oven on a half-sheet pan to finish cooking along with the baked potatoes. There was quite a lot of spice crust on the bottom of the cast iron pan, so I fried a sliced onion and some cabbage in there to take on the flavors. The boys ate their cabbage raw. Crazy kids.


I'm not drinking my beloved coffee with chicory this week. It's an experiment to see if Poppy's eczema gets better without it.

I really do hope it works for her sake, though I must admit there's a small part of me that hopes it doesn't work, for my sake. It's not so much that I rely on the caffeine in the coffee as the fact that I really like the flavor of strong coffee with lots of milk. It's a comforting start to the day.

The cup of black tea with cream I've been drinking instead is literally a pale imitation of my coffee. A tannic, watery, definitely not as comforting start to the day.

However! I have discovered something good in the process of drinking tea every morning. One of the things I dislike about tea is that I feel it needs sweetener to make it less tannic and drinkable (for me), but I don't much enjoy the white sugar I usually use. And so I tried maple syrup.

The maple flavor goes well with the tea, and it seems to go farther than sugar. In that I don't need as much of it for the tea to be drinkable.

Tea with maple syrup and cream is still a sad substitute for chicory coffee with milk, though. Boo.
Posted by Kristin @ Going Country at 7:45 AM 5 comments:


We had to get dressed up on Saturday night for the Easter Vigil Mass at church*, during which A. was baptized and confirmed. These sacraments take place during the service and required the whole family to be processing down the center aisle and very much on display. So I thought I should probably make the boys wear actual shoes. As opposed to their snow boots, that is, which is what they usually wear to church this time of year.

Everyone else wears boots to church, too. It's kind of a necessity when there's three feet of snow on the ground.

The boots are fine normally, but they are awfully loud. Those three boys stomping their way up the aisle sound like an invading army. Not exactly the solemn procession the priest was envisioning, I'm pretty sure.

Getting from our car into the church isn't a problem, as there are cleared sidewalks in the village. Getting from our house to the car, however? That's 30 feet of mud, ice, and snow. In other words, shoe-destroying territory.

For that reason, A. put on his muck boots and carried each boy out to the car individually when we left. He left his muck boots on and changed into his dress shoes when we got to church. And I wore my snow boots until we got in the car at home, at which point I changed into high heels. Because traversing the path to the car in high heels would be even stupider than doing it in regular shoes.

It was a very nice service, though, and we all looked pretty good. No mud anywhere.

The only photo I have of most of the family was taken by eight-year-old Cubby in a dim house past the baby's bedtime. Which is why it looks like this: 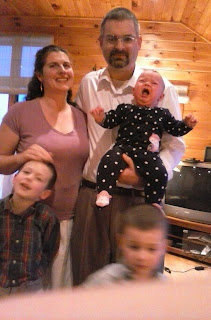 Pretty much her mood during the entire two-hour service.

I hate to leave you with that image, though, so let's end with this one, instead: 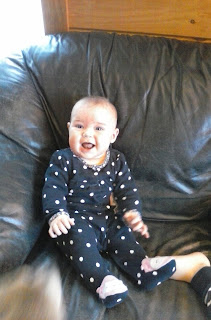 * This is a two-hour (or longer) church service that starts after dark so the service can begin in a dark church with an open fire in it. The fire is contained in a metal basin, but still. Open fire. It was a real challenge with four little kids, but was definitely a neat experience. It was the most concrete example I've ever seen of the way Christianity borrowed rituals from more-ancient religions.

Labels: all about me, confessions, country livin', country wisdom, family, Poppy, the A team


The chocolate bunnies have been consumed. The dyed eggs have been found. The kids are still in their jammies at 9:30 a.m. and there's a whole lotta sugar-fueled screaming goin' on.* 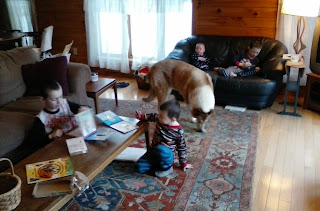 Happy Easter from our crazy crew to you.