I'm sure you were all just dying to know what we got Cubby for his first birthday. I mean, what could we possibly give to the best, most enchanting child in the whole world (in my totally unbiased opinion) to celebrate his very first year of life?

Well, since this is Blackrock, we figured 4,000 gallons of water was appropriate.

Yeah. Cubby's birthday began with me informing A. that the water pump was making unhappy noises and I was pretty sure the water was all gone. Sure enough, we were plumb out. We had been waiting to pump water from the creek near the house, figuring that surely it would thaw. It always thaws sometime in January or early February.

It is supposed to thaw out later next week, which is no help when we're out of water NOW. And we're having a rather large birthday party for Cubby today. I assumed that at least some of the 25 or so people who will be attending would probably want to use (and flush) the toilet at some point. And then, of course, there were the dishes that would need to be washed after the MiL finished baking three cakes.

So I had to call the two water delivery guys in the area early yesterday morning, figuring if I called both, at least one would be able to deliver the same day. We ended up getting 2,000 gallons delivered from each, for a total of 4,000 gallons. This filled the cistern almost completely and ensured that we will be able to flush the toilets many, many times before having to worry about pumping.

Flushable toilets--our gift to our son. Do we know how to create lasting memories or what?
Posted by Kristin @ Going Country at 3:45 AM 5 comments:

Happy birthday to
the purest joy I have ever known. 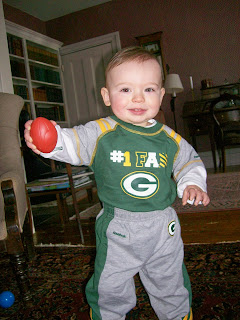 Have I mentioned that Cubby is not a sensitive child? At all. I'm not talking sensitive as in emotions (though I suspect that is also true), but sensitive as in physical discomfort. Loud or sudden noises have never bothered him; he runs around with cold hands and nose half the time but doesn't seem to notice that he's cold; if he bumps his head on something he gives the thing a quizzical look and moves along*. And yesterday, not so much as a squeal when he got a needle stuck in his vein.

I had to take him in to get blood drawn for a lead test, you see. They stuck that needle right into the vein in his inner elbow, he made one little whimper, and that was it. It was the most astonishing thing I've ever seen. Is he missing some nerve endings or something? Why doesn't he cry? And does this mean that he's going to play rugby when he's older?

* Unless he's tired and then there is WAILING and ANGER and MY HEAD IS BROKEN dramatics.
Posted by Kristin @ Going Country at 7:58 AM 5 comments: 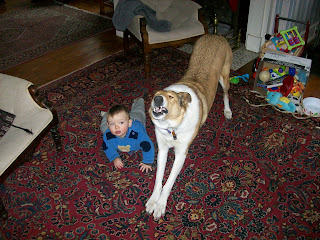 P.S. Mia had just gotten up and was stretching when I took this. She was also about to yawn, apparently. Or maybe she was about to rip Cubby's face off. He certainly looks like he thinks that's a possibility.
Posted by Kristin @ Going Country at 5:31 AM 5 comments:

Of course we were speaking of shoes. Two days ago. Keep up, kids.

So! Shoes! Specifically, shoe sizes. I have a perfectly average, respectable foot. Size 8, not narrow or wide or with weird toes that make shoes fit oddly. Unfortunately, I don't think Cubby got my pretty, easy feet. I think he got his father's feet.

A. has wide feet, as does the MiL. They can't wear normal shoes. A. wears a size 11 1/2 wide. Not 11 and not 12, and certainly not an average width. The selection of shoes in that size tends to be somewhat limited. It's a weird size. It makes shoe shopping harder, if you want a lot of choice. Or, depending on your viewpoint, easier because all you have to do is find that size and take what there is.

When I bought shoes for Cubby this past weekend, I ended up getting a size 7. Size 7 is, predictably, quite large for a year-old child. But then, Cubby is generally larger than a year-old child. I also found that baby shoes come in wide sizes. Imagine that. So I got him the wide size, because his little toes and feet are shaped just like his daddy's. Which means I now have two hard-to-fit boys to shoe shop for. Boo.
Posted by Kristin @ Going Country at 5:34 AM 8 comments:

Labels: all about me, baby stuff, Cubby, the A team

I Expect My Thank You Note Any Day Now

For those of you who may not have watched the Superbowl last night or seen any news this morning, the Packers won. I will take some credit for this, as I made the supreme sacrifice of staying up past ten o'clock to cheer them on. I KNOW. Last year the Saints won because I sat my very pregnant self in a chair to watch the whole game, this year the Packers won because I stayed up way past my bedtime.
I think the NFL teams should all bid on me to be their good luck charm, don't you?
ANYWAY.
Because I am not a true, pure football fan, I can now move on to the other important parts of the Superbowl: the halftime show and the commercials.
I was somewhat underwhelmed by the halftime show. I mean, I like the Black Eyed Peas, but the whole space agey theme with the dancers plastered in glow sticks and all just didn't do it for me. Then, partway through their set, I heard that guitar riff. And I said (out loud, yes),"What? They're sampling Guns 'n' Roses now? Oh no."
BUT THEN. There was Slash. Slash! The real Slash! Minus the ever-present cigarette I recall from Guns 'n' Roses' heyday, but still. There he was, actually playing that guitar riff. Awesome.
Fergie did a good job with the song, I thought, though she maybe went a little overboard with the gyrating around Slash. I think she was trying to channel Axl Rose, but it didn't work so well. Slash didn't seem to pay any attention to it, however, true to character. Slash totally redeemed the whole halftime show in my opinion.
As for the commercials, I thought they were mostly really, really lame. Also, a little much with the car commercials. Honestly, how many more cars can the consumer market absorb? My favorite commercial, I think, was the one for Teleflora with Faith Hill. You know, the one where she encourages the guy to write a note to the object of his affection, to just write what his heart tells him to write, and he writes something like, "Dear Kate, Your rack is really awesome." And then he says, "My heart told me to."
Loved it.
And thus ends my recap of the Superbowl and its attendant entertainments.
Posted by Kristin @ Going Country at 5:24 AM 8 comments:

Cubby's Packers apparel will not be arriving in time for today's game. I have some tiny infant Packers socks that I might be able to shove onto his gargantuan feet. Or maybe I can just put them on his hands, like little mittens, and we'll pretend we're cheering at frozen Lambeau Field.
Or frozen Cowboys Stadium. I know this inconvenienced many people who were planning on attending the game, but I have to say, I think it's hilarious that two teams known for their cold-weather hardiness were scheduled to play a Superbowl game in a stadium known for its warm climate . . . and then it snows.
ANYWAY.
I believe we will have kielbasa and sauerkraut for dinner tonight. It seems appropriate. We are not going to a party, which is just as well since we got several inches of heavy, wet snow last night and A. is even now toiling in an attempt to shovel our ridiculously long driveway.
So the party, such as it is, will be at our house tonight. I have beer, chips, and the ingredients to make some kind of dip. We're ready for the game.
Posted by Kristin @ Going Country at 7:20 AM 6 comments: