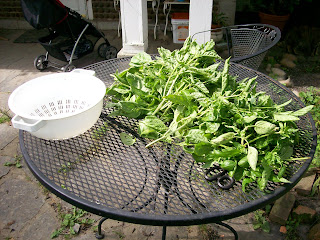 Take THAT, basil bushes!
A fun equation for you: 9 tightly packed cups of basil+12 cloves of garlic+a few handfuls of walnuts+3 cups of olive oil = 4 ice cube trays of pesto.

Round one of Pesto Cubing complete. The basil bushes are even now preparing to explode for round two. But I'm not scared: I have a food processor this year. Whee!

See, in previous years, I've been forced to make my pesto in the blender. This works okay for small batches, but making multiple double batches is a pain in the ass in the blender. Because the leaves get all stuck in the bottom, leaving whole nuts and basil in the top layer and liquid in the bottom layer. But not with the fancy 14-cup Cuisinart the MiL gave me last year!

I will admit that I'm still a wee bit afraid of the wicked sharp blades on the thing, and there is no doubt it is a bitch to wash by hand (as we must wash all of our dishes, due to a lack of mechanical dishwasher). But pesto? No problem! Shredding five gallons of cabbage to make sauerkraut? Bring it on! The Cuisinart feels no fear!

I think the vegetable prep season this year is going to be a whole lot easier, and a whole lot less cramp-inducing to my hands. You and me, Cuisinart. Together, we shall conquer the vegetable harvests.
Posted by Kristin @ Going Country at 5:06 AM 7 comments:

Labels: all about me, domesticity, fun with food, gardens 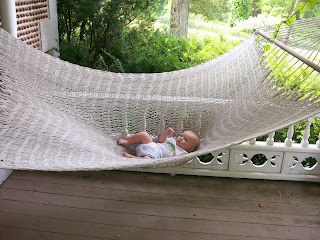 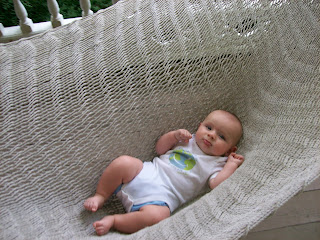 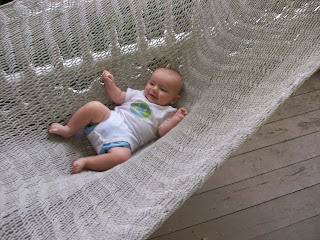 Cubby hopes you all have a fantabulous summer weekend, poppets!
Posted by Kristin @ Going Country at 5:05 AM 7 comments:

Triage is the order of the day in the garden this year. I get such a limited amount of time out there without interruption that I have a running list in my head of the absolutely necessary and the stuff that can wait. The absolutely necessary is inevitably all that gets done in the couple of hours I have to spend.

So! The absolutely necessary last night included pulling weeds (SO MANY, MANY WEEDS) from around the carrots, chard, basil, eggplants, and peppers. The areas of the garden that are not currently actually planted in anything (like around the rambling squash plants), or the areas like the corn patch in which the plants are taller than the weeds? You're on your own, kids. Sorry.

In addition, I pulled off the flowers starting to form on the basil plants, noting that it's definitely past time to make some pesto, and discovered to my delight that there are already jalapenos on the jalapeno plants. Now if only I had some tomatoes, there could be homemade salsa once more. Hurry up, tomatoes. I'm tired of the overcooked, sludgy excuse for salsa I am forced to purchase.

I was also pleased to note that the bell peppers have small peppers on them already, the Ichiban eggplant is working on growing its second eggplant (the first was delicious), and the Ronde de Nice zucchini will probably have some usable zucchinis ready in a few days. Whee!!!

Then I harvested some more broccoli and picked blackberries, without the protection of a long-sleeved shirt. Because I was too lazy to go ALL THE WAY UPSTAIRS to get one. Bad idea. Evil blackberries and their evil thorns.

But my scratched-up arms and hands are of no consequence! I have performed surgery on the most desperate cases, saving the garden from certain death.

Or something.
Posted by Kristin @ Going Country at 6:35 AM 7 comments:

So there Cubby and I were, wheeling down the driveway in the chariot (except he was the only one IN the chariot--why don't they make tandem chariots so the parent can ride too?), on our way to get the newspaper. And there Mia was, lying next to the driveway, chewing away on . . . something.

I didn't want to look at what she was gnawing on. I knew it wasn't going to be anything I really wanted to see. But, much like a car accident, you just can't turn your head away when the dogs or cats are chewing on something. It's horrifying, and yet fascinating at the same time. So, against my will, my eyes were inexorably drawn to the thing in her mouth.

And it was a woodchuck head.

Welcome to my life.
Posted by Kristin @ Going Country at 6:08 AM 9 comments:

Finding the Bright Side

It's hot again. And will be forever and ever, amen.

However! Today is not going to be yet another post in which I whine ceaselessly about how hot and sweaty I am. I think I might have covered that already. Instead, I thought I should share with you how Cubby deals with the heat. 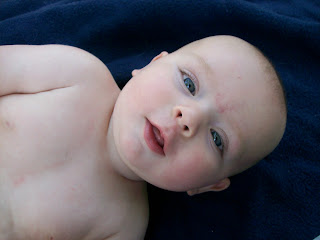 Did someone say my name?

Yes, Cubby. Why don't you tell the nice people how you feel about the wretched, nasty, miserable heat. 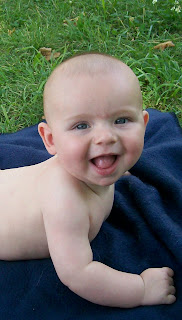 And why is that, my sweet? 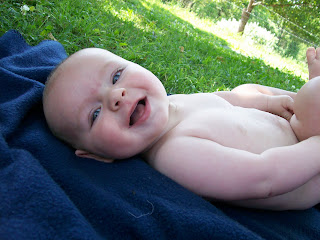 Because of nekkid baby time on the lawn! WHEEE!!
At least someone's happy.
Posted by Kristin @ Going Country at 7:22 AM 12 comments:

Because I would really like to know: Are A. and I the last people left under the age of 60 who don't own cell phones?

Really. This is not a rhetorical question. Anyone else cellphone-less?
Posted by Kristin @ Going Country at 5:44 AM 17 comments:

Taking the Bad With the Good

The Bad
Yesterday morning, A. took the lawn tractor down to the beach to start the water pump. When he tried to start the tractor again to come back up to the house, the engine blew. Like, oil-leaking-everywhere, no-hope-of-recovery blew. And it was on the wrong side of the road. Beyond the bottom of the driveway. Uphill all the way to the house.

At first we thought if we could just get it to the bottom of the driveway, we could chain it to the truck and pull it the rest of the way up that way. So we pushed it up the little ridge from the lakeshore and waited for a break in the heavy traffic of a Saturday morning in the summer. Then we started pushing it across the road. And then some kind of special lever on the back that disengages to put the tractor in neutral randomly re-engaged, so it wasn't in neutral anymore. Which meant the back wheels were dragging and pushing suddenly got about five times as hard. And then a car appeared. Whoops.

We did manage to get it across the road with some difficulty, but no bodily harm. But our plan to hook it to the truck the rest of the way didn't work, because it wouldn't stay in neutral to roll up the driveway. A. needed to be next to it so he could kick it back into neutral when it slipped out. Which meant we needed to push it. Or, in my case, pull it. With the rope we had looped around the axle. So I pulled like a draft horse on the front, A. pushed from the back, and we slowly slogged our way up (and I do mean UP--everything is uphill when you're coming from the lake) to the house, finally leaving the tractor on the lawn by the house.

Then A. spent about half an hour disconnecting things so he could lift the engine out, with the idea that he would just order a whole new engine and put it in himself. I guess no one rebuilds small engines anymore--like so much else, it's cheaper to just buy a whole new one. But after he got it out and figured out what kind of engine he would need, he discovered those particular engines are not cheap. And it will actually be cheaper to buy a whole new tractor.

So that was not such a good start to the day.

The Good
Yesterday was the annual village festival. We didn't attend most of the events, but we did go to the parade. With Cubby, of course. Who loved it, of course. Especially the fife and drum corps. All that wonderful noise was just his scene. This year, the festival had a circus theme, so there were several clowns in the parade. And, this being upstate New York, several of the clowns were carrying beers as they cavorted their way down Main Street. Awesome.

Plus, we got to play with the granddaughter of one of the MiL's friends, a little girl only a few months older than Cubby who is OH MY GOD SO ADORABLE with her little curls and blue eyes. Of course, with babies under a year, "playing" is a relative term. Mostly, Clementine (even her NAME is adorable) grabbed at Cubby's feet in the chariot and attempted to grab his face. And he just stared quite solemnly at this other grabby small person. But it was still beyond cute to see two babies examining each other.

So at least we ended the day on a good note.
Posted by Kristin @ Going Country at 5:18 AM 8 comments: