Peace on Earth, Goodwill Toward Men?

More like "Peace at Blackrock, Goodwill Toward All Animals Around the Woodstove." 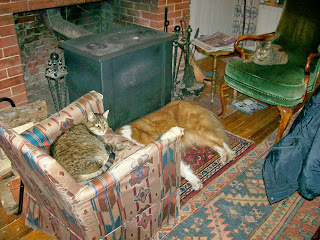 I Can't Think of a Clever Title About Snow

You can just insert your own clever title up there. Thank you.
The last week or so has been pretty depressing, weather-wise. Bitter cold, then freakishly warm. Rain, then sleet, then some gloppy snow. And always, always, always a cloudy gray sky, with no hint of sunshine to be seen. Our Vitamin D levels are sinking rapidly.
Personally, I see no point to cold weather and gray skies if it's not going to snow. Snow makes everything look so much better. It covers up the dreary dead grass and muddy patches. It coats the bare, leafless branches of trees in a nice layer of sparkly fluff. The dogs get stupidly excited and bound through it, scooping up mouthfuls of snow occasionally and generally making idiots of themselves. It doesn't make the chickens so happy, but tough noogies.
It finally snowed a significant amount last night. Just a few inches, but that's enough to cover the ugly and make everything more aesthetically pleasing. 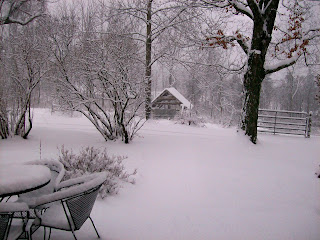 And because I don't have to drive anywhere in it (not that I could, as my car is currently out of commission, but we won't talk about that), I can just enjoy it from inside the house. Next to the woodstove.

Well, until I have to go shovel out the woodpile to re-stock the wood. Even snow has its drawbacks.
Are you a snow bunny, or does the very thought of snow make you shiver and consider relocating to L.A.?
Posted by Kristin @ Going Country at 5:46 AM 11 comments:

Labels: all about me, country livin'

Are you feeling frantic? Frazzled? Overwhelmed by the decorating, baking, cooking, purchasing, wrapping, partying, OH GOD MAKE IT ALL STOP.

Pitty Pet is here for you.

Today, Pitty would like to show you all the proper way to relax and rejuvenate your spirit. When he's worn out from his rigorous eating and pooping schedule, he indulges in the following stress-relief techniques.

First, it's important to find the correct spot for your meditation. Pitty Pet recommends a place as close to the woodstove as possible, because warmth is essential to happiness.

Second, you must assume the proper position. Curling up in a ball is optimal. Pitty understands some humans feel the need to suck their thumbs when curled up. This is optional.

Third, and most important, once the position is assumed, you must stay there and remain immobile for AT LEAST three hours, preferably five. You may feel the need to extend your session for as long as seven hours. This may be a challenge, particularly if you are likely to be disturbed by pesky dogs wishing to lick your face or pesky humans who demand possession of your chair. The dogs can be taken care of with a swipe of the paw. The humans may force you to relocate. In which case, you must begin from the beginning.

Perhaps you require a visual? 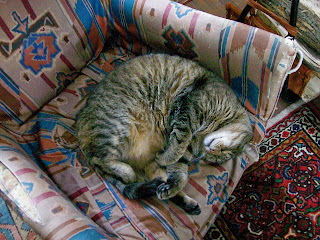 The Master Relaxer at work.

Pitty Pet hopes he has been of assistance to you today. He accepts any and all tributes in the form of kibble and adoration. Just as soon as he wakes up.

We had the first of the venison last night, and it was very, very good. Especially for roadkill.

I have learned many new skills since moving to Blackrock, and a lot of those revolve around food. One of those skills is how to cook strongly-flavored meat. Meaning, in our case, wild game and lamb. I had never eaten either of those things, not once, before moving here. And if you're accustomed to the mild (some might say tasteless . . .) meat at the grocery store, cooking (and actually enjoying) these different kinds of meats can be a challenge. So I thought I should share with you some of my acquired wisdom, in case you ever find yourself with roadkill that you plan to eat*.

I think the most important factor in the flavor of wild meat, and venison in particular, is the way it is treated when it's dressed and butchered. But beyond that, a good rule of thumb is strong flavorings for strong meats. Also, low, slow cooking methods. When I cook the venison roasts, I sprinkle them with salt and a tiny bit of French Four Spice (which is white pepper, ginger, nutmeg, and cloves--I know, it sounds weird, but you'll just have to trust me here), brown the meat, soften some sliced onions in there, then deglaze the pan with a bunch of red wine, add some water, and simmer the meat in that mixture for a few hours. That creates a nice pan sauce for the meat, too, that you can finish however you want. Thicken with flour, add a little bit of cream, whatever. But the wine and the long cooking will mask some of the wild flavor and make the meat very tender. It can be very tough if you're not careful.

For lamb, take a cue from Middle Eastern cooking (which uses sheep as its primary meat, after all) and use a bit of cinnamon. I do not like cinnamon in savory dishes as a general rule, but it does work well with the distinct flavor of lamb. And again, red wine is your friend if you're trying to create a sauce for lamb.

Anyway, go get you some roadkill and get to cookin'. You might be pleasantly surprised.

I Hope This Guy Gets Pants for Christmas

The MiL gets a lot of UPS deliveries, so the men in brown are frequent visitors to Blackrock. They're unfailingly pleasant and friendly, and they always give the dogs treats, so I have a fairly good opinion of them in general. But yesterday, I saw something that made me doubt the intelligence of one particular UPS delivery man:

Dude was wearing shorts. The high temperature yesterday was 22 degrees.

I understand that UPS drivers do a lot of running in and out of their trucks to deliver things, so they're not sitting all day. But I do a lot of outside work, and there is no kind of hard labor that makes bare skin comfortable when the temperature is in the twenties. And I know he couldn't have been comfortable, because his legs were that angry red that results from exposure to cold. I felt like I should invite him in to warm up by the fire.

There may be a good explanation for this astounding lack of sense, but failing a good one, I'm just gonna have to go with the most obvious: He's just a leeeetle bit slow.

But as long as he's nice to the dogs, I guess slow is okay.
Posted by Kristin @ Going Country at 5:34 AM 8 comments:

The Spoils of War

The one benefit to hosting far too many people at a party in our home (besides the fact that all of our glassware has been washed and so can be used without fear of dust and dead insects for the first time in months) is what those people leave behind. And I'm not talking about crumpled napkins and crumbs ground into the rugs.

No, I'm talking about the wine. Wine being, of course, the traditional safe hostess gift. I can't remember how many bottles of wine I took as the guests came in. A lot of them were consumed during the revelry, but a lot more were left over. A LOT more. 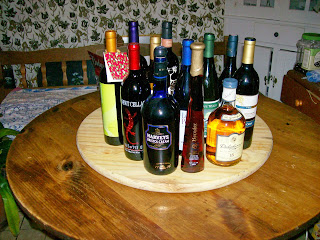 This is going to require a lot of coffee mugs.

One particularly favored guest even brought a bottle of single malt scotch. And there's something in there called Harvey's Bristol Cream, which sounds impossibly British, though I haven't the first clue what it is. But mostly, it's wine. White, red, dry, fruity, even ice wine. And it's really a tragedy that all of this lovely alcohol is being stored on the kitchen floor.

There is only one possible topic for today's post: The Party. Oh, the Party. An event so large and impressive, it deserves a capital letter.

I think I sat down maybe twice yesterday between 9 a.m. and 8 p.m. First, while the MiL did all the cooking, there was the set up. Moving furniture. Setting out chairs. Vacuuming. Hauling out all the serving platters, punch cups, wine glasses, and silverware we possess (and we possess a shitload of such things) and laying it all out as neatly and elegantly as possible. 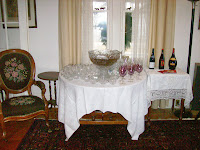 We have a punch bowl. On a pedestal. It's okay to be jealous.

Sweeping the porch. Putting up tables. Setting out the beer in symmetrical, orderly rows and finding places for the Pellegrino, soda, and cider. 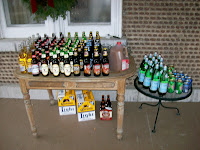 Further evidence of OCD, yes, but also, an impressive quantity of beer.

You would have wanted to come to this party.

Then the guests arrived. And arrived and arrived and arrived. I took coats and bottles of wine and gifts for the hostess (that would be the MiL, not me--no presents for me. But I'm claiming some of the wine, dammit.) and repeated over and over and over, "Hi, I'm Kristin. I'm the MiL's daughter-in-law." Then I directed them all towards the booze. The MiL had made enough food to feed a regiment, and that's about what showed up. We didn't take a head count or anything, but there were almost a hundred people in the house at one point. And I was threading through them with empty bottles, cups, and glasses on a tray. In heels. It's a miracle I didn't break anything.

All the punch was consumed, dozens of bottles of wine were emptied, the food was almost finished entirely, and everyone had a wonderful time. It was a very successful party. And the current state of our house is ample evidence of that.

If anyone feels like coming to help clean up, I'll pay you in leftover onion dip and beer.