Last night as A. was cleaning and skinning a duck outside on the picnic table, the following words came out of my mouth:

"Jack, don't run off with the hatchet."

"Charlie, Daddy's butchering the duck. Do you want one of the wings or a foot to play with?"

To that last one, A. shook his head in amusement and said, "Listen to yourself."

Labels: all about me, Charlie, country livin', Cubby, ducks, fun with food, Jack, the A team

For bravery in the field of combat--otherwise known as taking small children on walks every day, no matter the weather, and despite the fact that I almost always have to carry the toddler home again--I receive the highest honor that can be bestowed upon me by my children: 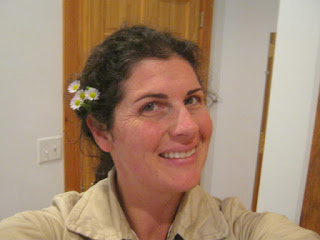 Weedy flowers to stick behind my ear. 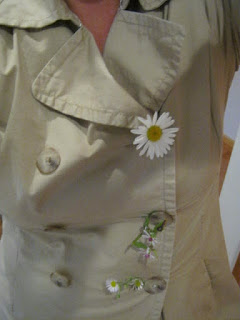 And in my coat buttonholes.

Labels: all about me, Charlie, family, Jack

The Measure of a Morning

There are harvested winter squash curing on the picnic table . . .

Laundry on the clothesline . . .

Sourdough dough working in a bowl . . .

Jelly canned and cooling on the counter . . .

Vegetable soup simmering on the stove . . .

And two children who have been fed and more or less entertained all morning*.

Of course, all too soon the laundry will be dirty again, the bread, squash, jelly, and soup will all be eaten, and the children will require more feeding and entertaining.

But for now? For now I feel victorious.

* The third child was fed and sent to school so someone else could entertain him. Hooray for school.
Posted by Kristin @ Going Country at 11:27 AM 2 comments:

Labels: all about me, country livin', domesticity, fun with food, randomness

Ever since moving to our new house in the far north of New York, we've been meaning to go to Canada. We live literally less than a mile from the border, and less than two hours from Montreal.

Montreal. Have you been to Montreal? If you have not, I am sorry. It's the closest you can get to a European city in North America.

No, really. Cubby's former teacher grew up in France, and she brings her two children to Montreal every summer because it's the best approximation of Paris she can afford.

It is one of the most impressive cities in the world. We now live less than two hours from it, and yet had never been.  Time to remedy that.

We timed our trip so we could go to Mass at one of the many impressive churches in the city. Specifically, the Notre-Dame Basilica of Montreal: 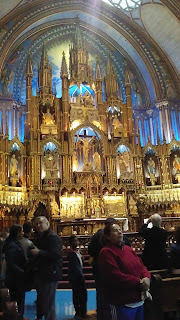 And here it is, as viewed by Cubby through A.'s camera (after Mass, thankyouverymuch, because we will not allow our son to be the asshole taking photos during the service).

The basilica is very beautiful. This is the view from our pew: 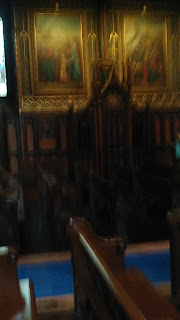 A little more of an artistic (by which I mean out of focus) view. Also courtesy of Cubby.

Not that I saw much of the inside of the basilica. I spent most of the Mass outside on the plaza with Jack and Charlie, chasing pigeons and trying to keep the two of them from leaping in the fountain. 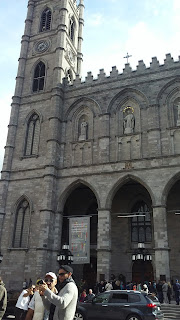 But Cubby did get a nice photo of about half of the facade! And a couple taking a selfie. So scenic.

After Mass, we walked around the old part of Montreal for awhile. 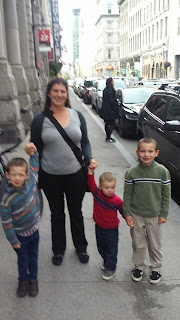 No doubt annoying many fellow pedestrians by taking up the entire sidewalk.

I think we were the only people in the entire city with a child under two who did not have a stroller. But that's cool, because A. and I are old hands at hauling a child around using only our shoulders and arms.

We got home about 5 p.m. I immediately made a very fast dinner for the crew (tuna-rice skillet meal! 30-minute meals win again!) and then remembered, hey, it's supposed to get to 30 degrees tonight. I confirmed this with an online weather forecast, and then questioned out loud to A. if I should pick the bell peppers in the garden. Yes, he said.

Okay, what he actually said was, "Yeah. Thirty degrees can really mess those peppers up, bro," but he was trying to be funny and I really hate the term "bro," so we'll just pretend he really only said "Yes."

So I went outside and picked all the bell peppers that were starting to turn red. Plus any tomatoes still on the plant. And the beet greens. 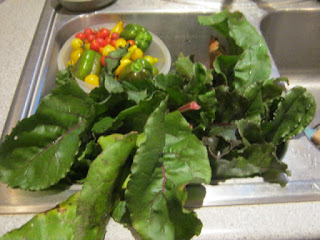 This may seem like more trouble than it's worth, but I've been gardening long enough to know that about January, I will be mad at myself if I don't harvest fresh greens when I can.

I guess the moral of this story is that you can bring the country mice to the city, but country mice they will remain. And I have a lot of nice beet greens now that would probably cost a lot if I were to try to buy them in Montreal.