I was determined to have the bathroom shelves all painted and done by today. But I realized about halfway through the first coat that I wouldn't have enough paint. So I have to take a trip into the Small City to get more paint before I can finish.

I didn't even get that first coat all on yesterday, because when I got to the second-to-last shelf, I found that the primer I had put on the day before hadn't dried yet on the bottom shelves, thanks to our awful humidity.

Also, the toilet in there is now leaking around the base--meaning the wax seal needs to be replaced--making the whole bathroom smell like urine.

We have approximately thirty people coming to our house a week from tomorrow for Charlie's first birthday party. I am beginning to suspect the universe is conspiring against my having a functioning, non-urine-smelling, completely painted bathroom for those people to use.

Cut me a break here, okay, Universe? I'm not asking for much.

What better way to celebrate Independence Day than by sending my son away with his father to learn all those by-gone skills that made Our Great Country great? Fire! Woodcraft! How to avoid getting malaria when beset by mosquitoes!

Yup, it's another father-son camping trip, this time far north, to the edge of the Adirondack Mountains. The son I speak of is Cubby, obviously. Charlie's a little young yet for this sort of adventure. Although his time will come, oh yes. There will come a day when I will wave goodbye to all three of the boys as they depart for another stint of peeing in the woods and (not) sleeping on the hard ground.

But for now, it's just Cubby and A. Charlie and I will be staying behind to man the fort against marauding bears. Or, you know, continue the never ending bathroom painting. Two more coats of paint on the shelves and then I will have my own personal independence from this stupid bathroom project.

Happy Fourth, my lovelies. Celebrate independence by camping or painting bathroom shelves or drinking beer and blasting off incendiary devices, but celebrate. It's our duty as Americans.
Posted by Kristin @ Going Country at 3:18 AM 5 comments:

I miss my old buddy pasta. What glorious times we had--me eating, him (or would it be her?) satisfying my insatiable addiction to carbohydrates.

Unfortunately, an addiction is what it is. And addictions are not known to be good things.

Not that I would have quit pasta on my own. Oh no. Its hold on me was too strong for that. But living in a house in which I cook for two other people who don't eat it (gluten issues) has made it pretty easy to not make pasta. Because I'm not about to make an extra food that half the household doesn't eat*. I cook enough as it is without starting up with that.

So. Pasta is a pretty rare occurrence.

But we have half a gallon-sized freezer bag full of pesto cubes left from last year that I want to finish up before I start making this year's pesto. So I made pasta with pesto last night. Cubby loves it, and Charlie's okay with it, so the three of us ate some of it. And then I had a bunch left over.

I also have a huge bag of garlic scapes that Mr. Jason brought by last night. Plus some mushrooms. And a small amount of Italian sausage Cubby didn't eat last night. And some heavy cream.

A. and the MiL don't eat pasta. Cubby doesn't eat mushrooms. Charlie doesn't eat sausage (he probably would, actually, but I try to limit his sodium intake to reasonable levels, and sausage is not reasonable). But all those things together in one bowl, plus the cream and scapes?

Oh pasta/pesto/mushrooms/sausage/garlic scapes/cream mixed up in a glorious messy bowl.  You complete me. And make a damn good lunch.

* Yes, I am aware of the existence of gluten-free pasta. No, I do not like it.
Posted by Kristin @ Going Country at 9:54 AM 2 comments:

Am I the only one who sometimes misses old-school film cameras? I feel like I do a lot more of the work with digital photos, what with uploading them to my computer, saving them to the Walgreens website so I can print them, saving them to the external memory thingie, and then going through and deleting them all from my computer so I don't have five million photos taking up space on my laptop.

I mostly fail at all of this, by the way, which is why I still have photos on my computer from January.

But then, that allows me to stumble across old photos like this: 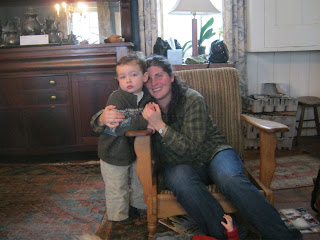 As I recall, both Cubby and I were sick when this photo was taken, so I wouldn't say it's the most attractive picture. Of me, anyway; Cubby looks as if he's posing for a Gap Kids ad. Anyway, illness is probably the only reason Cubby stood still long enough for a picture to be taken.

Also, please note Charlie's tiny hand reaching up. What a representative photo of multiple-child motherhood: Holding one while the other demands attention.

Still, though, it was a nice picture to randomly re-discover six months later.

Right on tortoise schedule, I'm nearing the completion of the awful bathroom re-painting. Only the shelves to go.

For as long as anyone could remember, the toilet paper holder has been behind the toilet, off to the side. So getting the toilet paper involved a bit of contortion to reach around. It was always annoying to me. And now was my opportunity to eliminate this one small, but persistent, annoyance.

So we put the toilet paper holder right on the side of the toilet, within easy reach, no contortion necessary.

It's a small thing, but it makes me unreasonably happy.
Posted by Kristin @ Going Country at 5:44 AM 6 comments: