Long version: I now use three 12-ounce cans of tuna to make tuna patties. That is a LOT of tuna. And it all gets eaten. Yikes.

Good thing I buy it by the case. And good thing I bought a case just about two months ago, because it is apparently not in stock online for another month. Sigh.

Long version: Know what else is hard to find online now? Masa. I guess because it's a kind of flour? I dunno. I do not have a case of that, but the five pounds I do have should last me a little while anyway.

Long version: I bought 100 pounds of flour from King Arthur early in March, right before the great flour shortage of 2020 began. I wasn't intending to hoard flour; I just use a LOT of flour to bake all our bread and was tired of almost running out and didn't want to pay shipping more than once. And now King Arthur is apparently out of every kind flour.

The mutton was the meat that came off the bones we boiled to make stock from the wether. It's not great meat after it's boiled for six hours, but good enough to mix with barbecue sauce and eat with coleslaw.

Long version: There was more of the boiled mutton (yum) left, but when 3:45 p.m. rolled around, I couldn't make myself cook it. Because I didn't really want to eat it.

We had all had eggs for breakfast, so I made grilled cheese.

I still had a big bowl of sheep stock in the refrigerator, even after freezing several gallons of it, so I used some of it to make the soup. Onion, garlic, half a can of whole tomatoes that had been hanging out in the refrigerator, leftover mashed potatoes, and some frozen stir-fry vegetables. It needed more flavor, so I threw in a cube of pesto from the three left from last summer.

The soup turned out pretty well. But everyone still wanted to round the meal out with another course. Thus, yogurt with maple syrup.

Long version: Yeah, "boiled potato chunks" means I was going to make mashed potatoes, but somehow ran out of motivation before getting to the actual mashing part. Luckily, boiled potatoes with plenty of butter, salt, and pepper are also good.

The salad was actually the last of the lettuce from the store mixed with the last bit of coleslaw. The coleslaw was pretty liquid-y, so it made a surprisingly good salad dressing.

Long version: Funny how even though I'm home on Mondays and Wednesday, which are my work days at the school, I now have no more time to cook than I did when I was at the school all day. That's because my house is now the school, which means helping Cubby and Charlie with their schoolwork as well as completing my own work tasks, as I'm still getting paid to work from home.

It's surprisingly hectic. Or maybe not so surprising.

Anyway. On such days, sausage to the rescue!

On a related topic, since I have to turn in all of Cubby and Charlie's work via photo attachments in e-mails to their teachers, my phone has almost zero photos of the actual children, but dozens of these: 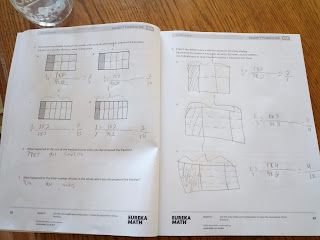 So this was April Fool's Day, and I was very relieved that my children forgot about it. This, despite Cubby actually writing on the calendar the week before, "Plan April Fool jokes."

I hate April Fool's jokes. I am Not A Fun Mom, I don't enjoy shoveling Legos out of my bed before I can go to sleep (last year's brilliant joke), and I'm not sorry, either.

Long version: I used the last of the mutton that came off the bones during stock-making to make the taco meat. It wasn't great, but it was okay.

I used some of A.'s green garlic as a topping on the tacos, which was very good. I must specify that this was green garlic that he had provided to me, because I'm too afraid to dig up any of his hundreds of garlic plants. He's very protective of his baby garlic.

Speaking of A. and gardening, he helped me plant the asparagus crowns that I ordered two months ago and that finally arrived this day. I was very excited. 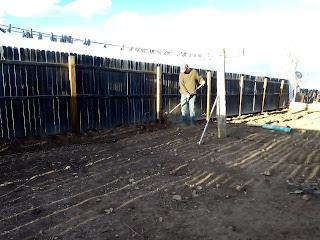 We can't actually EAT any of the asparagus until next year, but it's anticipatory excitement.

Incidentally, A. is an excellent person to have on hand when it's time to put in a garden. The man is a digging machine. This is convenient, because I am . . . not.

Life As We Know It


It has not escaped anyone's notice that life as we know it has changed.

For instance, this is now our classroom: 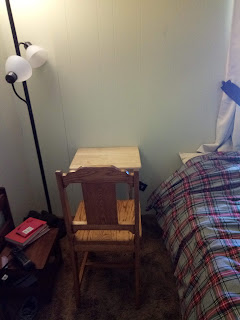 All the comforts of home. Because you ARE home.

The boys now meet with their teachers and classes in that spot right next to my bed, for the sole reason that this room has a lock inside the door and thus can exclude any unwanted siblings. Which is all of them.

They use A.'s work laptop to do this, because we discovered that of the two laptops and one desktop computer in our house, A.'s is the only one with both a functioning microphone and webcam for video conferencing.

So for the moment, the three boys are using that laptop for their school meetings, I'm using it for my online teaching, and A. is using it for his law practice.

On the plus side, our food supply situation has actually somewhat improved. The school decided to temporarily allow community members to place orders for limited items through the school's Sysco delivery. This means that every Wednesday, a truck arrives ten minutes from my house with gallons of milk and pounds of ground beef, potatoes, rice, flour, sugar, butter, and all kinds of other things.

Unfortunately, that list of limited items doesn't include fresh vegetables, but I can get four gallons of milk and 36 pounds of butter, so that's fun.

Also, Rafael stopped by yesterday with a box of food for us that he couldn't use: 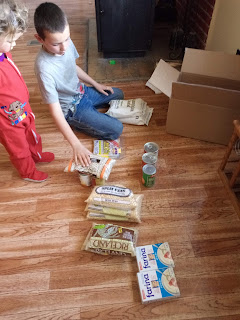 Cubby helpfully sorted it for me.

It was mostly a lot of dried beans, brown rice, and Cream of Wheat, although there are two bags of  instant dry milk, which is a pretty hot item these days I understand.

We have watermelon seeds sprouting, as well as some pepper seeds (FINALLY). The small tomato seedlings are growing rapidly, as are the basil plants. We expect beet seeds and carrot seeds outside to start sprouting any day, and the lettuce, radishes, and arugula are growing apace.

So that's how it is for us. How's your life these days?

Labels: all about me, fun with food, randomness, school


Poppy has composed an original song that she will sing--well, more like chant--spontaneously and frequently. The lyrics are:

Or, if I were to transcribe it the way she actually says it, it would be:

An excellent mantra for all of us these days.

Poppy also advocates flinging yourself down and screaming and crying when it all gets to be too much and you need to rage against the injustice of life.

In between those episodes of emotional venting, everything should be as normal as possible. Play. Talk. Laugh. Eat. Read books. Make silly faces. 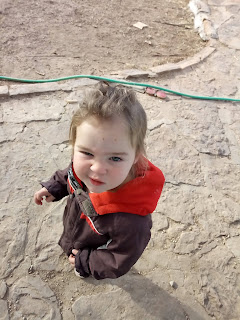 And don't be afraid. The sun will come up in the morning.