For someone who doesn't really like to bake, I seem to do an awful lot of it. Four loaves of sourdough bread every ten days or so, occasional muffins, rare cinnamon rolls, even rarer cheese crackers . . .

Let's be real: I bake because I really like to eat baked goods that taste good. So it's worth it to me, even though I don't like the process much.

That said, I feel the baking for Cubby's birthday this year is a little excessive.

His birthday is on Sunday. It happens to fall on a Sunday when he has Sunday school, so I figured he could bring in some muffins for a birthday treat for his Sunday school class and I would be off the hook for birthday cupcakes for his class at school.

He agreed that bringing in muffins would be good. But then, this week, he said everyone in his class brings in a birthday treat, even if their birthday is not on an actual school day.

He also wants a cheesecake for his actual birthday cake on Sunday night for the family celebration.

And yesterday, with unfortunate timing, I took the last loaf of bread out of the freezer.

So here's my schedule:

This morning I started a new batch of bread and baked 24 cupcakes. (I even remembered the flour! A good start.)

This afternoon I'll make frosting and finish the cupcakes so I can bring them to the school tomorrow.

Saturday I'll make the cheesecake so it can chill in the refrigerator for Sunday.

And then I'll be hanging up my apron for the foreseeable future, because that is a lot of baking. But I have my new 25-pound bag of flour, four packages of cream cheese, a few dozen eggs, and a lot of sugar.

Labels: all about me, confessions, Cubby, domesticity, fun with food 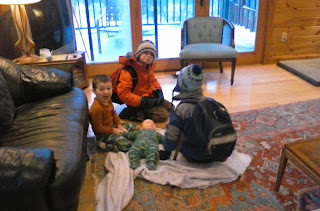 They mean well. I think.