Last week I finally used up the last of the broth left from cooking the home-brined corned beef. There may be recipes for using it, but I just made different things a bunch of times until it was all gone.

The last thing I made was chicken cooked in it, and then I added diced carrots and frozen spinach and garlic powder and white wine and cream to make a sauce for the chicken and some rice.

I mention this because it was exceptionally good. The MiL said I should remember how I made it so I could make it again. Not that I could ever re-create it, because although the ingredients are listed up there, I have no idea how much of anything I put in. It's not as if it was a recipe. I just threw things in until I thought it was done.

This is my most common method of cooking, and it's definitely one I should stick with. Because here's what happened when I used a recipe.

I was making hummus. I spent ten minutes skinning chickpeas for the proper texture and then prepared to obliterate them in the food processor with the standard tahini/lemon juice/garlic combination. I was just going to throw everything in until it tasted good, as I usually do. This is what I should have done. Instead I looked at a recipe, and then everything went wrong.

I decided to look in this enormous Middle Eastern cookbook of the MiL's. I've never made anything from it, and I thought maybe there was some secret ingredient or tip that would make hummus even better. The recipe listed chickpeas, water, tahini, lemon juice, and garlic*. All good, although the water gave me pause. I've never added water to hummus, but I thought maybe the chickpeas absorb it and it makes a nice texture? Three cups seemed like a bit much, though.

So I added about half a cup of water to the food processor. I realized two things simultaneously: One, that it was now waaaay too thin. And two, the recipe was starting with dried beans, whereas I used canned. The water was for soaking and cooking the chickpeas. That were then supposed to be drained.

How's that for complete idiocy in the kitchen?

I was really pissed that I spent all that time skinning the chickpeas only to screw up like that. I added a can of cannellini beans to thicken it up, as we were out of chickpeas. It's still too thin, but at least edible.

I think I'm just going to swear off even trying to follow recipes anymore. It's just not for me and my apparently unfocused brain.

* This recipe also calls for skinning the chickpeas, and I felt very smug for already doing that. How the mighty (and smug) will fall . . .
Posted by Kristin @ Going Country at 5:48 AM 5 comments:

Labels: all about me, fun with food, stupidity

So Sorry To Keep You Waiting

What's that? You're* dying to see photos from Easter and can't imagine what's taking me so long to post them? Oh, okay. If I must. 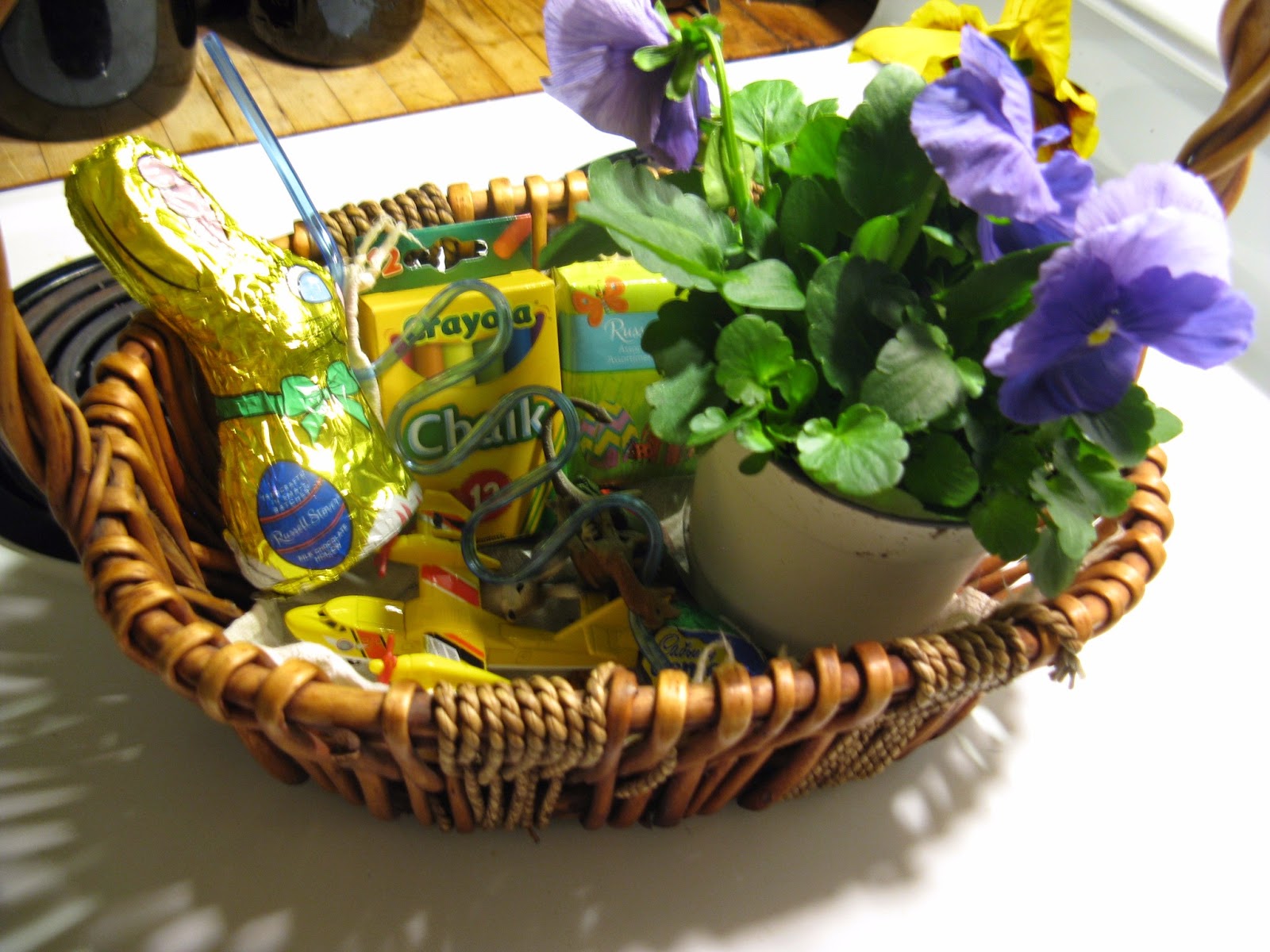 Don't worry--there was a basket for each child. I didn't make them share. 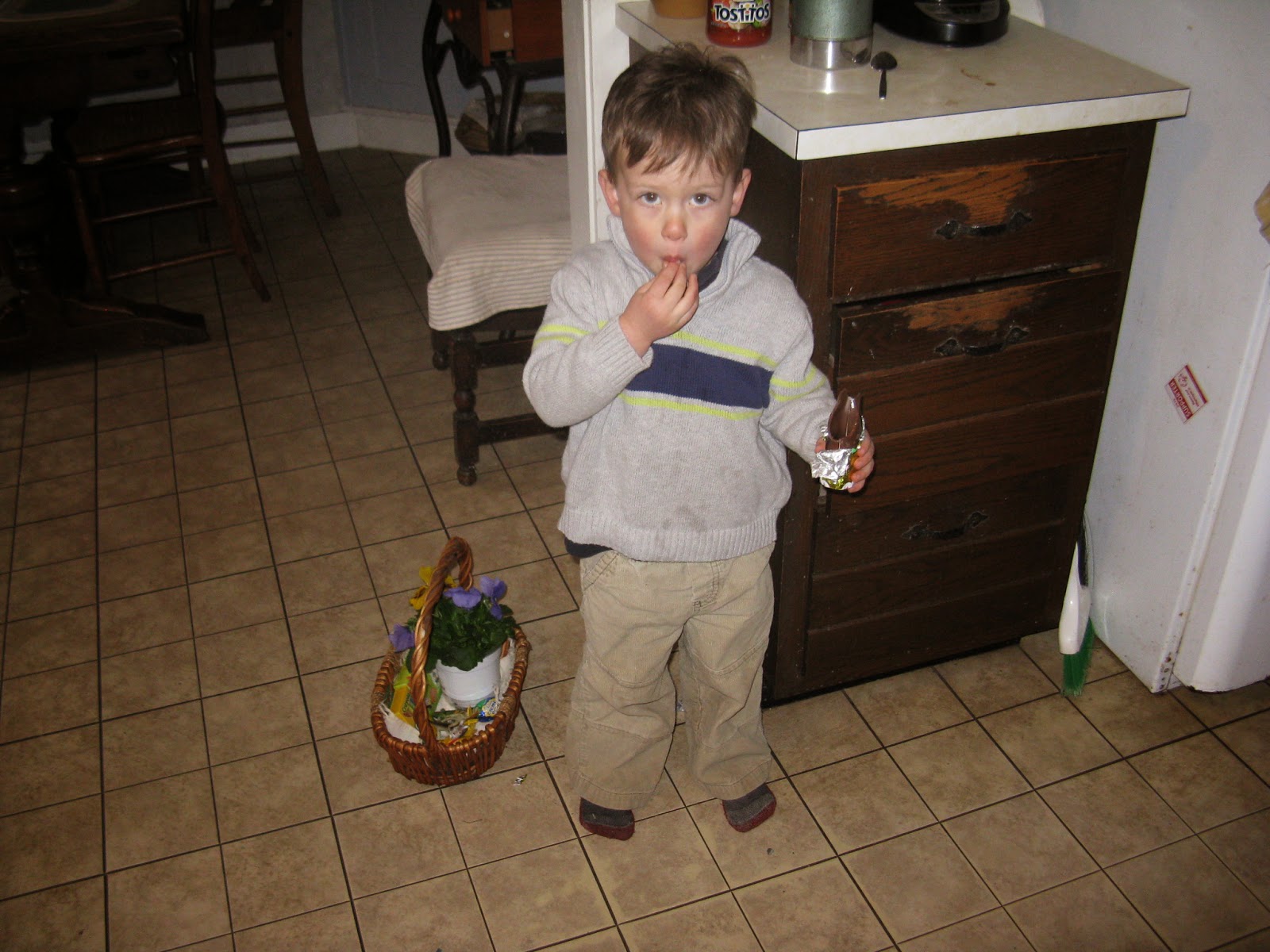 Charlie wasted no time eating his entire chocolate bunny. At 7 a.m. Good thing I got the small hollow ones. 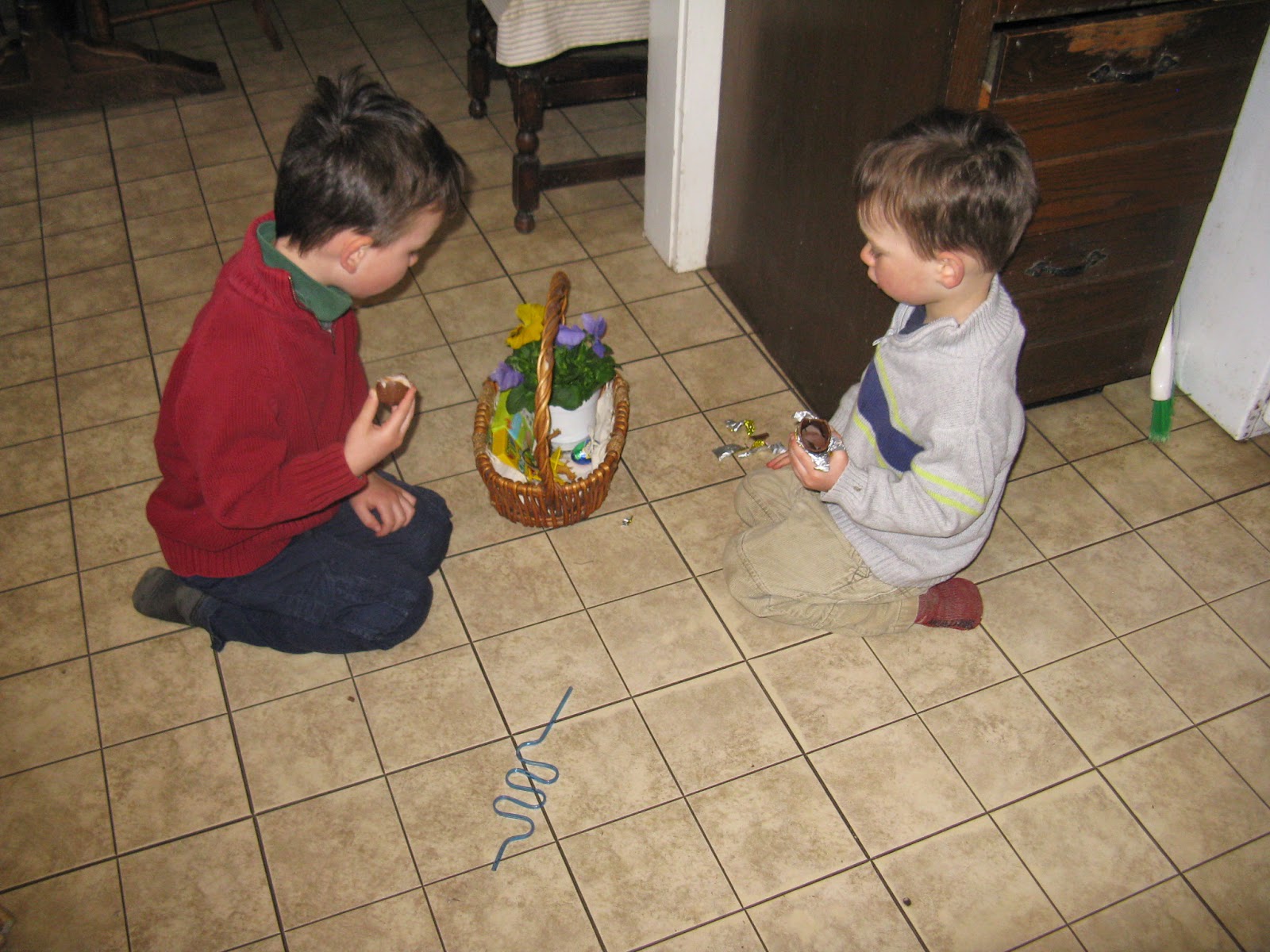 Cubby elected to eat his Cadbury egg first. A good choice, in my opinion. 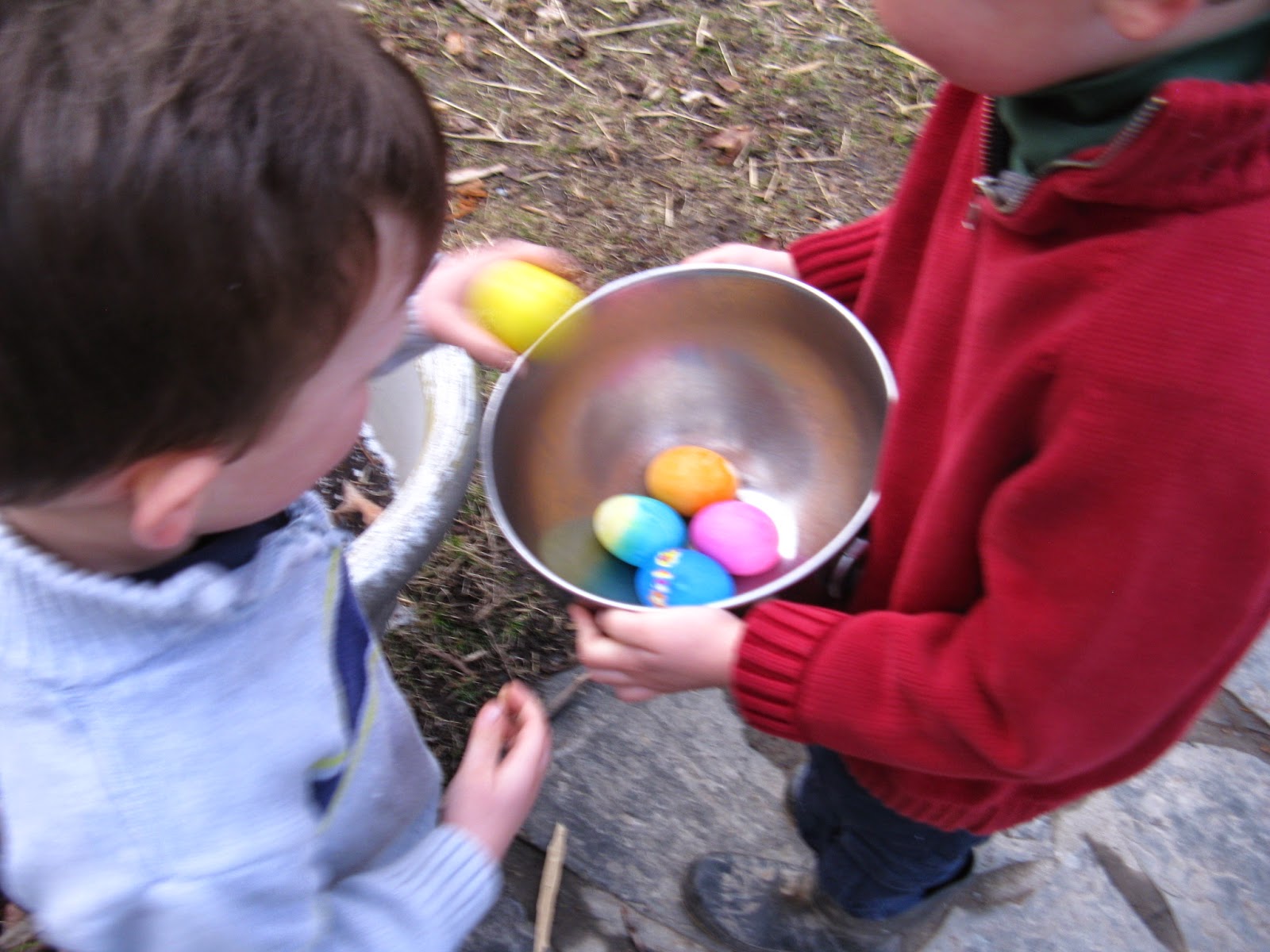 They found some technicolor eggs and collected them in a very Easter-y metal bowl. 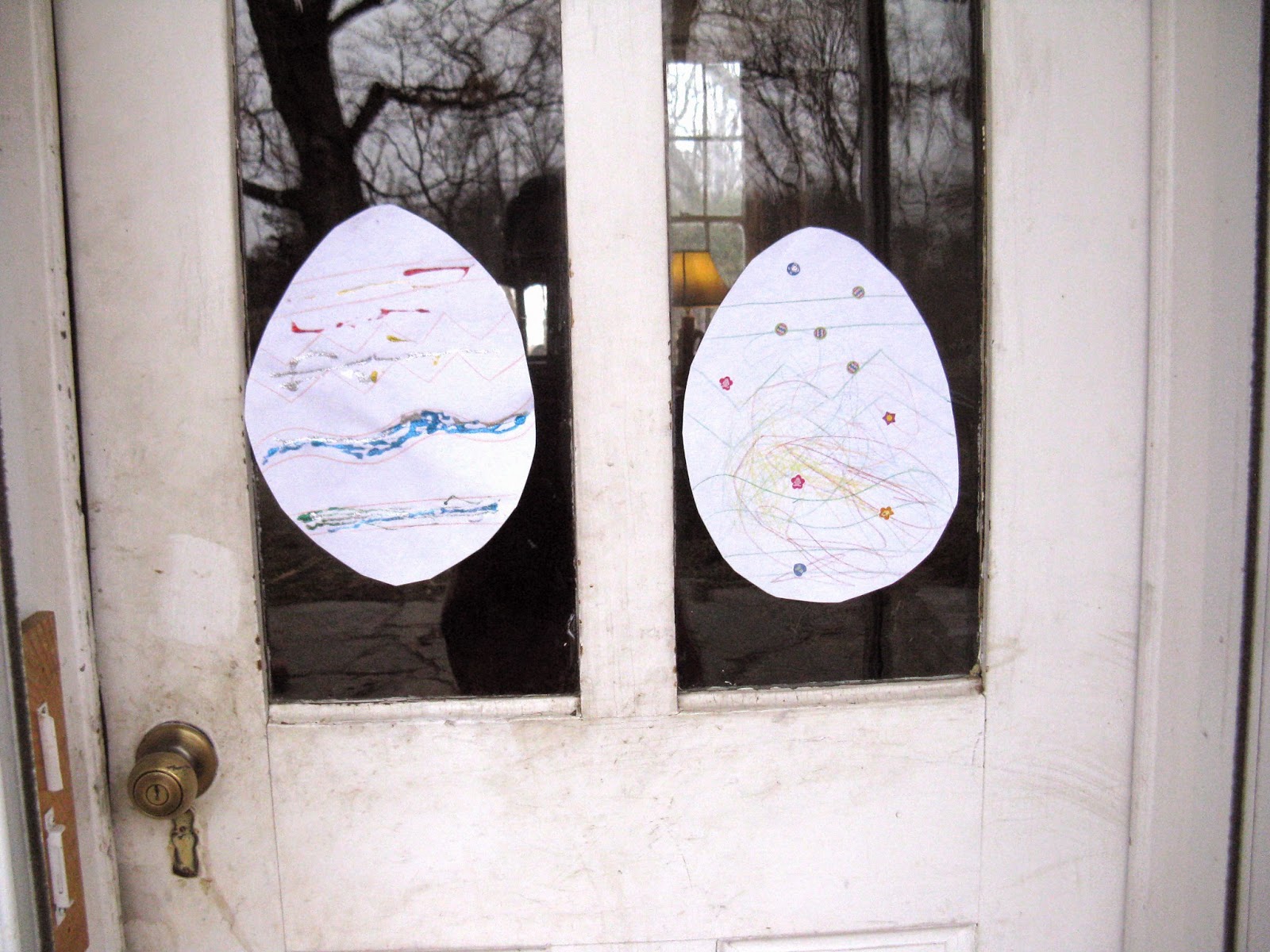 Okay, do I win some kind of crafting award for cutting out totally asymmetrical eggs and adding patterns for the kids to fill in with glitter glue and stickers? Thought so. This was our entire effort at decorating. On our filthy door.

What I do not have photos of:

Cubby and Charlie fishing in the snow with A. and Mr. Jason.

The twenty people that gathered at our house in the afternoon for an Easter dinner that included a pork loin, a ham, and a leg of lamb. You want meat? You come to our house.

The five million dishes the MiL did afterwards.

I put the older children to bed at 7:30 tonight, as usual. At 8:30, there was ominous thumping upstairs, and then we heard wailing.

I went upstairs to find Charlie sitting up in his bed with a book he had retrieved from the bookshelf in their room. He was crying because he wanted to read a book. It was pitch black in his room and his brother was fast asleep, but he thought it was story time.

I gave him some water and started to tuck him back in, but he stopped me because of pillow problems. Often when he wakes up and cries, he complains that his pillow is wet, and then I have to flip it over. But this time he stopped me, announcing, "I need to solve my pillow problem."

So after his problem was solved and he was appropriately tucked in, we had an extra goodnight kiss and I left, shaking my head all the while at that crazy Charlie. Charming and entertaining, but definitely crazy.
Posted by Kristin @ Going Country at 6:39 PM 2 comments:

The Easter Bunny Has Landed

The eggs have been hidden*, the baskets are filled. The older children will be awake in T minus six minutes.

Happy Easter, my lovelies. I raise a chocolate bunny to you.**

* It was a balmy 33 degrees and there was a full moon when I did it by flashlight at 5:50 this morning. It was pretty neat, actually. I didn't even need my coat.

** Or rather, my Cadbury Mini Eggs. I can kind of take or leave a chocolate bunny, but Cadbury Mini Eggs? Those things are not safe around me. Mmmm, fudgy chocolate coated with a thin candy shell . . . they're what M&Ms want to be when they grow up.
Posted by Kristin @ Going Country at 4:15 AM 1 comment: