What's with people thinking that my taunting of Old Man Winter is going to lead to severe weather and certain doom and destruction by heavy snowfall? I can only assume that those of you who fear to challenge winter have never lived in a place that is cold and miserable more than half the year. Because I have a little bit of advice for you: The only way to survive in a place like this is to have no fear. If you spend all summer and fall dreading the coming winter, it WILL suck. Yes. Trust me.

I know this winter is going to be a bad one. A. predicted it months ago (don't ask me how he comes up with predictions like this, but they're freakishly accurate). The national weather services have now officially forecast a brutal winter for the northeast, due to good ole El Nino*. And of course, I'll be going into labor sometime in February (Lord willin' and the crik don't rise), which pretty much guarantees at least that month will be full of raging blizzards so I have the opportunity for a really harrowing ride to the hospital and a subsequently AWESOME birth story.

So, it's inevitable that this winter will be rife with opportunities to wipe out on the driveway and flail through the snow for firewood. It sucks sometimes, and I will probably whine at some point, but I'm okay with it. Because what's my other alternative? Pleading with Old Man Winter to have mercy? I don't think so. Bring on the snow, cold, and ice, because there is no fear here.

* Can someone PLEASE tell me how to make the Spanish squiggly above the "n" in Blogger? This is annoying me.
Posted by Kristin @ Going Country at 6:05 AM 12 comments:

Labels: all about me, country livin', country wisdom, the A team, weather

Just another chilly morning, letting the chickens out of their coop, closing the gate to the ram pasture, when . . . wait. What's this? It's cold. It's white. It's . . . snow.

That's right. We can now record in the annals of history the first snow fall of the winter, weak and insignificant though it may be. Looks like Old Man Winter is getting ready to bring it. And you know what? I AIN'T SCARED.

Labels: all about me, country livin', country wisdom, randomness, weather

Now that the nights are getting cold, the grass is losing its protein content. Which means the sheep aren't getting all the nutrients they need solely from the grass in their pastures. A. has been letting the lambs out of the paddock to roam and find good, ungrazed grass on the lawns around the house. 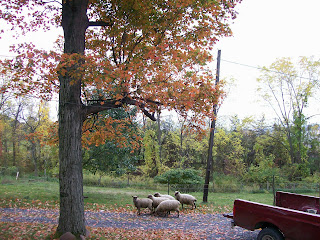 They also like to, ahem, fertilize the lawns. And the walkways around the house. Gross.
Posted by Kristin @ Going Country at 5:31 AM 4 comments:

At the Cock's Crow

I think it's high time that someone corrected the misconceptions about roosters and their crowing that seem to have proliferated. And who better than a person who has only had one rooster for a whole year? Yes, I am a rooster expert, and I will now share my vast knowledge with you.

1) Roosters do not only crow at dawn. Roosters crow whenever they damn well please. Daybreak, midday, middle of the night, anytime you pass their coop, whatever.

2) Roosters do not make a sound anything like "cockle-doodle-doo." At least, my rooster doesn't. I can't really transcribe the sound he makes, but just trust me when I tell you that it sounds nothing like the roosters in cartoons.

3) Roosters do not only crow once a day. Roosters crow many, many times. Over and over and over. Our rooster, for instance, crowed every nine seconds from at least 5 this morning until the chickens were released from their coop. I know, because I was lying awake in bed counting the seconds between crows. Crowing every nine seconds seems a wee bit excessive to me. Probably to our neighbors, too.

And I think that concludes our rooster lesson for the day. Class dismissed.
Posted by Kristin @ Going Country at 5:57 AM 12 comments:

You may not know this, but vegetables? They grow in dirt*. I KNOW. SHOCKING. This is not such a problem by the time they get to the grocery store, as the people who grow the vegetables very kindly clean them for you before shipping, so they're pretty much ready to go by the time you buy them (except leeks--filthy little bastards, those leeks). However, when vegetables are harvested straight from their natural environment, they are dirty. Real dirty. Especially fall vegetables, because they tend to be root vegetables. That is, vegetables in which the edible part is underground. You know, in the dirt. And that dirt must be removed before preparing said root vegetables for eating.

This is surprisingly time consuming.

Take beets, which we had for dinner last night. Beets require some serious prep time. First, they must be pulled out of the ground. Then the worst of the dirt is dunked off in the rain barrel. Then the leaves are cut off. Then they have to be scrubbed with a plastic brush, then rolled up in aluminum foil and roasted for, like, 24 hours* if they're really big, which these were. Then they have to be peeled, and then, FINALLY, they can be eaten. That is a serious time commitment, right there.

Don't even get me started on the cleaning of leeks. The pain in my ass, it is substantial.

Days like yesterday, when I foolishly decided to have the aforementioned annoying beets; plus potatoes, which must also be divested of their dirt and peeled; PLUS a pumpkin that had to be hacked into pieces, the innards scooped out, roasted, scooped into a ricer and riced, then mixed with various spices and things to try to make it taste like something (it didn't--my suspicion that those "pie" pumpkins were too big to be really edible was well-founded) are just . . . exhausting. Too many damned vegetables with too much damned prep time. And that's not even counting the roast and gravy.

This healthy eating thing is going to wear me out in the end.

* Except the ones that are grown in sand or hydroponically or something, but let's stick to the main point here.

** Maybe a slight exaggeration, but at least an hour and a half.
Posted by Kristin @ Going Country at 4:41 AM 10 comments:

Good Thing We Were Ready

We don't have confirmation of what the temperature actually got down to last night, but when we got up at 7 a.m., it was 34 degrees. There was still frost on the ground up behind the house, although I don't think any of the plants around the house were touched. But of course, we had the woodstove at the ready and the storm windows up.

However, the winter clothes are still in storage, because we played hooky yesterday and went hiking (as well as we could while dodging small-game hunters, that is) with the dogs instead of staying home and attending to our chores.

Weather stripping on the door? Check

Flannel sheets and wool blankets on the bed? Check

Space heater on in the bathroom? Check

Woodstove banked at night, ready for the morning? Check