Long version: I was planning on making corn muffins, but ran out of motivation. So I squandered some of our last precious store-bought corn tortillas for this meal. When we're almost out of corn tortillas--which I buy in 80-count bags--you know it's been a long time since we've been to a store.

This day was five weeks and one day since the last visit to the grocery store, for those who are interested.

Long version: A. bought a bunch of cheap chicken drumsticks when he was at the store over a month ago. The last time I cooked some of it, I threw together a very random sauce for it that everyone loved. Even A., who does not love drumsticks. He asked that I do that again.

Sure! If . . . I can remember what I did. I think I managed to replicate it, though. After browning the chicken--which was coated in salt, paprika, and garlic powder--I put it in a 400-degree oven to start cooking. Then, in the chicken pan, I cooked a bit of diced onion, then added some ketchup, mustard, vinegar, and more garlic powder. This was poured over the chicken to reduce while the chicken was cooking.

While I was making the coleslaw in the morning with the last quarter of a cabbage and a few of the last carrots, the children swirled through the kitchen and devoured the remaining carrots. And that was the end of every last fresh vegetable in the refrigerator.

Long version: We went on a family excursion to this canyon and didn't get home until later than I had anticipated. And then, as soon as we got home, I had to plant out some of my overly large tomato plants in the beds A. had prepared the day before. So I was kind of late getting going on dinner. We were still eating by 5:30 p.m, though.

The kids ate leftover chicken, coleslaw, and the potatoes, which were the par-cooked and frozen potatoes. I put them in a cast-iron pan, still frozen, with some leftover hamburger grease and fried them until they were hot and crispy all around.

I had just a bit of ground beef left from making hamburgers a few nights previously, so I made one hamburger patty for A., and then he ate some fried eggs too.

I had fried eggs and some random leftover vegetables with soy sauce and vinegar on them.

The cookies were the remains of a marathon of cookie baking I did on Wednesday for the students at the school. We had a "pick-up parade" on Thursday, during which all the students drove to the school curb and we handed them all the things they had left at school. I figured it was a bummer to drive all that way (some people are driving as far as 90 miles to get to school) only to pick up some dirty shoes and water bottles, so I volunteered to make cookies for everyone.

There are less than 50 kids on campus, so that's less than 100 cookies.

I'm out of chocolate chips but have lots of raisins, so I decided on oatmeal-raisin. Unfortunately, oatmeal cookies are apparently somewhat tricky at high altitudes, as I discovered when I made this recipe for "thick, chewy" oatmeal cookies that absolutely flattened in the oven. They were as flat as cookies can be, and overly crispy. They tasted good, but I was not about to distribute those things to the community at large.

When I made the recipe a second time, they were somewhat better, but still too flat and brown. And not chewy. It was the MiL, who used to live in Albuquerque and is a much better baker than I am, who diagnosed my altitude problem. Oatmeal cookies have much less flour than, say, a chocolate-chip cookie, which I guess is the issue. She told me to add extra flour and half the amount of leavening next time.

Meanwhile, every student got a baggie with two crispy oatmeal cookies, and my kids got all the really flat ones. I actually froze about half of that batch as balls of raw dough, so I wouldn't have to spend the time baking them, and I baked them from the frozen balls right after dinner for our Sunday dessert. They were actually much improved by the freezing time (which the recipe author mentions in the recipe), so they were slightly less flat. Though still by no means thick and chewy.

Long version: This day got a little complicated, with some extra meetings that made my workday go longer, and then we had to go rescue the van, which had to be left at the canyon we visited the day before because of a flat tire.

Anyway, in between those two things, I made a very fast dinner of some of those par-cooked potatoes fried with small pieces of bacon. Then I added some cheese and, at the last minute, peas to make it an all-in-one meal.

Unfortunately, those frozen potatoes didn't re-heat well in the skillet. They were still a bit under cooked, which is never good for potatoes.

You know what is good, though? Poppy's Easter outfit. Her floofy dress had no sleeves, so she accessorized with a cropped denim jacket. 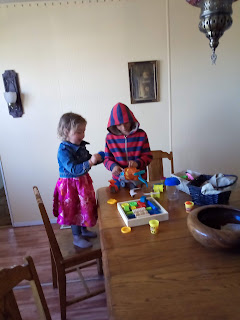 More fashionable at two than her mother will ever be.

Long version: In my rush to make dinner and get out the door to get the van the day before, I put the bag of frozen potatoes into the refrigerator instead of the freezer. So I figured I'd better use them up. I put them right on the pan with the last package of Italian sausage the MiL brought from Albuquerque (sad day), and later, some of the frozen green beans went right on that pan, too.

Roasted frozen green beans don't get as brown and crispy as roasted fresh green beans, but I much prefer the frozen ones roasted rather than cooked in water. They taste much less, well, water-logged.

The potatoes were perfectly cooked this time. Everything is better roasted.

Long version: The backstrap is one of the most tender cuts of meat, so all I did was slice it into medallions and sear it on a hot griddle with salt, pepper, garlic powder, and paprika. It was delicious.

Cubby was hovering around the kitchen earlier in the day while I was making bread and asked if he could have some of the dough to make something. I was planning on making garlic bread, anyway, so I took the dough for that and divided it in to four pieces and let the children choose their own flavorings for their own piece. I put out pepper, garlic powder, oregano, basil, and dill, figuring they would choose one or two. Instead, they all chose all of them.

They really loved their breads, though, so more power to them.

Long version: My new method of making hamburgers with the cheap Sysco ground beef is to simply press the meat down over the whole surface of my griddle pan. As they cook, the meat shrinks and I cut it into patties. What this does is create very thin burgers, which is a good thing with that wet meat. Kind of gross while it's cooking, but the burgers were pretty good.

The squash was the very last bag of last year's squash from the freezer. A. planted the saved seeds from that very squash in the backyard garden two days ago. Fingers crossed they grow and produce more squash for the freezer.


It's been awhile since I could honestly claim to be in the throes of The Tomato Crazy. But I think this year might be the year.

Sunday night I planted out five quite large tomato plants that were too big for the box in the kitchen anymore. A. prepared a very nice spot for them. He divided half of the more-sheltered backyard garden into what he calls "flooding cells." They're square and have berms of earth all around the sides, to hold the water so he can just put the hose in there and, well, flood it.

We found that this is the only way to ensure tomatoes get enough water in our somewhat arid climate. Sprinklers don't cut it.

In addition to those five, I have seven more plants that aren't big enough to go outside. So that's a total of a dozen tomato plants. With the possibility of more from the giant Sysco Roma tomato seeds I asked Cubby to shove into an empty seed-starting container. Those are just starting to sprout.

Okay, so it's a far cry from the 120 seedlings I ended up with one year at Blackrock, but I'm still pretty excited to have those dozen+. And if I can actually get them to produce (unlike last year), that could well be a large quantity of tomatoes.

Dare I say maybe even a shitload? Yes, I dare. And dare I say that I'm even looking forward to sweating copiously in the kitchen while I can jar upon jar of homegrown tomatoes? Yes, I dare say even that. (Though I'm sure there will be some complaining right about August if that does come to pass.)

In addition to the tomatoes, I have way more pepper plants than I was anticipating having. The first planting was so slow to come up that I planted some more. And then, as I might have expected, they all came up. Mostly thanks to the heating pad I put under them.

So now I have eight bell pepper plants in pots, plus the paprika peppers the MiL sent us are just starting to come up now. There are two of those so far, with a possibility of three more to come.

So there, again, we're going to have about a dozen plants. And again, I am excited. Bell peppers are one of those things I always buy when I get to a store, but they're kind of expensive and, well, almost 100 miles away. If I can manage to have dozens of bell peppers right in my backyard? I will be living the dream.

Maybe that's not everyone's dream. And maybe I'm crazy, but it's a kind of crazy I'm willing to live with.