Then the day we did the stuff is past and the pictures are old and somehow (somehow=newborn + other family members that still require care and feeding), I've just never written about it.

So here! Have a whirlwind update!

We went to the Adirondack Wild Center* on Saturday because it was free admission day. It's a little over three hours in the car to get there and back. I didn't really want to go with the baby, but I also didn't really want to leave A. to try to keep track of three crazy little boys in a public place. The baby slept almost the entire time, including in the car. The little boys were crazy in the car, but they got to see a live barred owl and get a bag of Cheetos from the center's cafe. Doesn't get much better than that.

In what is becoming a regular occurrence, Poppy soiled herself so thoroughly on Sunday morning that she required a full outfit change. Maybe she does it on purpose to ensure her lazy mother changes her out of her pajamas before church.

The first outfit choice was adorable, but not warm enough. 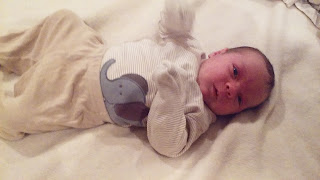 So I had to put another layer over that: 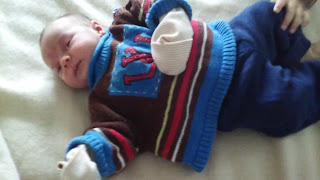 A bit androgynous, but that's what happens when your hand-me-downs come from three older brothers. (One of whom is photobombing with his hand there on the baby's knee.)

Poppy did not sleep through the service this time, because she pooped again and woke up just before the opening hymn. Which is when I discovered that I only had one properly sized diaper in the diaper bag.

I spent the next hour hoping she would stay clean and I wouldn't have to Macgyver a size 5 diaper into something that would fit a size 1 baby.

I didn't. Thanks, Poppy.

We finally got our half cow, which must have been the smallest cow ever, because the steaks are tiny. I did ask for a smaller cow, though, to make sure it fit in our freezer, and the boys love having their own individual steaks. A. just loves having steak at all, and I love having beef to change up our diet of constant lamb. Happiness all around.

Both Cubby and Charlie brought home pieces of paper with things to decorate for this week's open house at school--a turkey for Charlie and a tree for Cubby--with instructions to use "any media except food." I suggested they could use the designer duct tape sent by Aunt Tara. The reason she sent designer duct tape was because my niece used to use it to make headbands and so forth, so they had a lot on hand. Which is why we now have an entire shoebox filled with over a dozen different rolls of patterned duct tape. 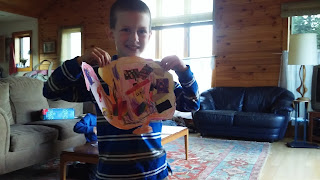 Jack of course must also have some; he made an original creation. 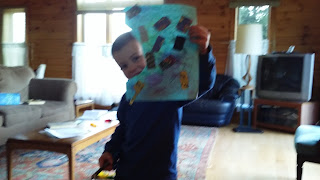 We also used the duct tape to secure the packages of lamb we wrapped up. It's nice to have designer meat packages in the freezer.

And I think we'll end there with a mic drop. Thank you and good night.