Long version: This was the night of the school play, so Cubby and Charlie were at school for dinner before the play started. The remaining four of us were due at Jack's classroom for a pre-play reading of the play's story ("The Emperor's New Clothes," minus the nudity) and a dinner that consisted of hot dogs and chips.

So I didn't actually cook, although I did make several dozen cookies for the bake sale auction fundraiser that runs concurrently with the play. 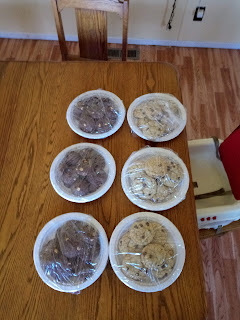 Good thing there was so much taco meat left over, because it was all eaten.

And here we have Cubby the Money Councilor: 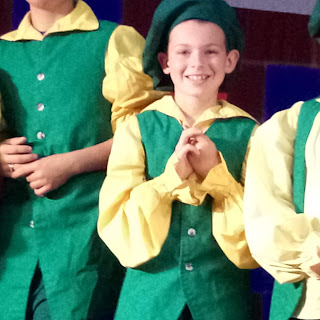 I will not post photo of Charlie the (Very Reluctant) Silkworm, because I couldn't figure out how to crop out all the other kids in the photo. I'm sure you can live without seeing him, although it was pretty funny. He told me before the play, with a very expressive scowl on his face, "I despise being a silk worm." To which I replied, "Okay, just suck it up and do it anyway." He did, albeit without enthusiasm.

Long version: A. used the outdoor grill to char the rest of the big bag of chiles my dad brought me from Hatch. I froze most of them, and then used some in the eggs. Every once in awhile I would get a bite that had a really spicy piece of chile in it, but generally it just made for some really good scrambled eggs.

I'm sure you all remember Rafael's calabacitas from last year, officially known as cucurbita argyrosperma. These are actually the first ones we've gotten from him this year. I need to get some seeds from him and grow some of our own next year. They're better than the average zucchini.

Long version: We had so many roasted things because it was only in the high seventies outside, so I cranked up the oven and crammed everything in all together. I love it when I can do this, even if I do have to get creative with my oven space and the single oven shelf.

I made the fruit dessert because I had a convergence of fruits that needed to be used. First I got a final bag of peaches from Nick the Peach-Giver. I canned them in halves, but the bottom came out of one of the jars while it was in the water bath. This is frustrating, but salvageable, as the bottom comes off cleanly and doesn't leave any glass splinters.

So I had a quart of peaches all peeled and everything. To those I added a few peaches we got from the orphan tree by the post office that had a lot of hail damage, but were otherwise fine. Also some pears from the tree in front of the village offices that has a TON of pears this year that no one seems to be using. We just picked up the windfalls and ended up with about ten pounds of small pears. They look like the Seckel pears I'm so familiar with from Blackrock, which means they're small and annoying to peel, but are very tasty.

Last I had some blueberries my parents left with us that were on their way out, so I threw those in there, too.

A betty is a fruit dessert like a crisp, but the topping is made with bread crumbs. I used some of the sourdough bread crumbs I always have in the freezer, plus brown sugar, cinnamon, and melted butter for the topping. The fruit had brown and white sugar, lemon juice, and cinnamon. It turned out really well.

Long version: Now that I'm coming in the door on Mondays and Wednesdays at 4:15 p.m. with all four children by myself (A. drops us off before continuing in the bus to bring home the rest of the kids that live farther away) after working all day and then need to make dinner, I'm trying to think ahead a little more. I already had ground beef thawed, and my plan was to use the juices left over from making the pot roast the week before to make a sauce, and then serve it with rice, which cooks in only about half an hour.

However, when I opened the container with the pot roast liquid, it was definitely too old.

Okay! Plan B! Which I did not actually have a plan for, but whatever.

Same ground beef, plus an onion, some roasted green chiles I had frozen in small quantities, cumin, and the juice from a can of tomatoes. The rice was cooking while I was browning the meat. I added some cooked rice to the meat in the skillet, then some grated cheese. And that was dinner.

Are you seeing a theme of meat+rice+cheese in my kitchen? Yeah. Maybe I should write a cookbook about it. Or maybe I've already said all I need to say about that. Not that that stops people from writing the books. 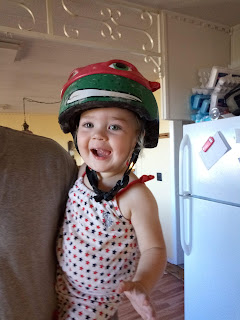 Ready for action in a patriotic romper and a Teenage Mutant Ninja Turtles helmet.

Long version: You can tell from the relative complexity of this meal that I do not work on Tuesdays.

It's been awhile since I've had to separate chicken legs into thighs and drumsticks. I did not miss it. Gross.

Long version: Another work day, another meal featuring ground beef. And frozen green beans that I did not even bother to heat up, because the children prefer them that way and A. and I were eating leftover vegetables.

Long version: Yet more of the never-ending and somewhat unappealing beef ribs. Part of the problem with them is that they're so damn long, I have limited receptacles in which to cook them. This time I just chunked them totally frozen into my big roasting pan and put them in the oven until they were thawed enough to cut up a bit. Then I covered the pan and cooked them until I could pull the meat away from all the nasty bits. Of which there are many on ribs.

The meat I fried in some of the fat from cooking the ribs in the oven, plus salt, cumin, garlic, and some of those very handy frozen roasted green chiles.

I only used two cups of masa to make the tortillas, and someone needs to remind me next time to use at least three cups. We never have enough tortillas, which results in much competition for the last one.

And hey! I made a double batch of zucchini bread this day and remembered to put in the butter. Yes, yes. Applause. Thank you.