First, let me just say how much I enjoyed all the comments on the last post. Who knew so many people have been reading for so long? Fun. And now, food.

If you want to skip straight to the beaver tail, that was on Monday. If you want the whole looong explanation of the week's food, please do continue.

Long version: I actually managed to get Poppy down in her crib to sleep in the afternoon, so I got all ambitious and started making tuna noodle casserole. And then she woke up ten minutes later, which meant I had to finish it with her kicking on a blanket in the kitchen and Jack "entertaining" her.

Tuna noodle casserole was a staple of my childhood. I know I used to make it for my family sometimes (I know because of the infamous incident when I made it and forgot to put in the tuna--whoops), but I don't really remember how I made it then. Except it involved cream of celery soup from a can, which is not something I have ever purchased as an adult.

Speaking of my family, my sister took this photo when she was visiting a couple of months ago: 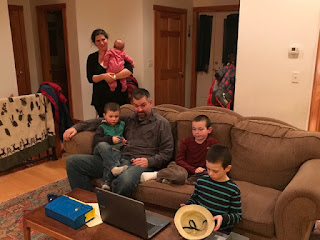 My first thought was, "That's kind of a big family." You'd think I'd be used to it by now, but it still looks like a lot of people when we're all in one photo.

Back to the present-day tuna noodle casserole . . .

How I made it now was to cook diced onion and celery in butter, add some flour, then milk until thick, then a whole bunch of cheddar cheese and some mayonnaise. I mixed this sauce with the cooked (gluten-free corn) pasta (edited to add: and the tuna!--see the comments) and then added more cheese. Then some more.

You always need more cheese than you think you will.

I would have covered the top with breadcrumbs mixed with melted butter, but I didn't have enough bread crumbs and was too lazy to haul out the food processor to make more. So I just covered the top in more cheese. Seemed reasonable. Baked at 350 until done.

Vegetable soup using some leftover beef juice from cooking the roast last week, and a bunch of vegetables. Man, I love vegetable soup. You may have figured that out by now.

Long version: We were away from home all afternoon and the kids ate various treats while we were out, so they weren't hungry for dinner when we got home at 5 p.m. Luckily, there were lots of leftovers. I cut up a cucumber with vinegar and salt for everyone to eat while I put away groceries. A. and I ate chili, and the boys ate tuna noodle casserole later. It's always a weird day when I don't cook.

Short version: I see with some frequency online something like the following, "Friday is always pizza night at our house! It's so easy and the kids love it!" I always think, "How exhausting."

But then, most people don't make pizza like I make pizza. It's a significant process. Sure is incredible pizza, though.

I cut it with kitchen shears. This kind of pizza has a really thick crust, so the shears work best.

We had the bell peppers and carrots again because Charlie and Jack kept trying to steal the peppers when I was cutting them for the pizza, so I gave them some of their own while I was cooking and then they requested carrots too. Okay, twist my arm, guys.

Long version: Thinly sliced top round London broil stir-fried with broccoli with a sauce blahblahblah, let's just get to the beaver tail, shall we?

Yes. It was the actual tail of an actual beaver. It's not even the first time we've cooked one. And by "we," I of course mean "A." Because this is the sort of thing that happens when he gets in the kitchen. (Tails and testicles. Sounds like a best-selling cookbook to me.)

We first came across the idea of eating a beaver tail in the book Meat Eater by Steven Rinella. He cooked his beaver tail directly over a campfire, held aloft on a stick. I mentioned this to Cubby, who of course was immediately captivated by the idea and made A. promise that if he ever had a beaver tail in his possession, they would cook it and eat it.

Cut to some time later when A. had a beaver tail and cooked it in the barrel stove in the barn, in much the same manner as Steven Rinella and his campfire. He portioned it out among the boys and they all devoured it. They were disappointed there wasn't more of it. I tried a small piece. It mostly tasted like smoke (beaver tails have a ton of fat, so they cause lots of flare-ups and thus, a lot of smoke) with the texture of fish. Eh. Not good. Not bad.

Anyway, A. had another tail on Monday, so he cooked it the same way for the boys. Again, they eagerly ate it and complained there wasn't enough of it. So that was their appetizer for the perfectly average dinner I had planned.

Long version: You may have noticed that when I have the oven on, I cook as many things as possible in it. So the pork roast (not sure of the exact cut, but it was an enormous bone-in one) was in most of the day at 300 degrees. I made the apples in the morning. After they were done, I put them away and later used the same casserole dish to cook some carrot spears. The potatoes I peeled and tucked into the liquid around the roast to cook for the last 45 minutes or so.

I sauteed the mushrooms and shallots in the bacon grease left in a pan from frying eggs in the morning.

After the roast was tender enough to pull the meat off the bone, I poured off the liquid, mixed the pulled-apart pork with whole-grain mustard, apple cider vinegar, and a little maple syrup, then put it back in the oven under the broiler to get a little crispy.

It was really good, although we did spend the entire meal watching Charlie meticulously pick all the whole mustard seeds off of his meat. It really added to the dining experience.

Short version: Leftover pizza, pork, and carrots (but not all together), and baked beans

Long version: I love baked beans. When I was single, I always had a can of Bush's baked beans on hand. I can't eat them anymore because my taste buds have changed and I find them far too sweet and syrupy now.

So, while I do love real baked beans cooked in the traditional pot, what I actually eat these days is a brand of canned baked beans called Grandma Brown's. They're made in a village named, amusingly, Mexico, NY. We pass the factory on our way to and from Blackrock. It's nice that it's a relatively local product, but what I really like about them is the minimal ingredients list: water, navy beans, brown sugar, bacon, salt, and baking soda. Nothing weird, not too much sugar, and delicious. Thank you, Grandma Brown.

Long version: I sent the boys out at 3:30 p.m. for their mandatory outside time and they reappeared at the door at 4:45 p.m. absolutely plastered in mud. Like this, except there were three of them, and more clothes. So by the time I got them all in and out of showers and baths and their clothing somewhat dealt with, it was past the time I should have started dinner. Good thing I had planned on leftovers.

There was quite a bit of pork left from Tuesday. I cut it into chunks, which I fried in lard with salt, pepper, garlic powder, and paprika. I did the same to the leftover potatoes from Tuesday. The reason I used the paprika was because Jack and I had experimented with dyeing eggs using various things we found in the kitchen, including paprika.* I had used about two tablespoons of paprika in a small jar of water. The paprika had mostly settled to the bottom, so I poured off the water on top and used the paprika sludge to cook with.

Paprika sludge is the next big thing in food. You heard it here first.

Anyway, it made Charlie happy, as three-quarters of his plate was covered in pafreaka. He didn't even notice that his salad dressing had whole mustard seeds in it. Ha ha.

* We also tried tea bags, coffee grounds, and onion skins. All these things resulted in various shades of light brown. Not exactly the colorful rainbow we were going for, but eh. They're not white anymore, right? And I didn't have to drive fifteen miles to buy an egg-dyeing kit or deal with that annoying wire egg holder thingie. Maybe next year I'll plan ahead better and get some beets and turmeric to make some actual colors.


Oh, hey. Just checking in today to let you know that I started writing this blog ten years ago today.

I suppose I should have something profound to say right now, but frankly, I'm too tired. So let me just say this:

Thank you to all of you who read this, and especially all of you who comment. To be truthful, that's often the only non-family interaction I get most days.

Should I not admit that? Maybe.

Happy ten years to Going Country. Let's carry on, shall we?
Posted by Kristin @ Going Country at 3:07 AM 23 comments:

The Tooth Fairy Gets Tricky


I have an unfortunately ambivalent attitude towards the standard childhood magic characters. By which I mean Santa Claus, the Easter Bunny, and the Tooth Fairy. I just can't go all in and weave elaborate stories and stage elaborate scenarios involving these characters. Neither do I flat-out deny their existence.

Mostly, I evade any direct questions. So far, Cubby and Charlie seem to take their classmates' word that these things are real. So they get stockings from Santa at Christmas (but not presents, because I want some credit for getting them the fun stuff, thank you) and Easter baskets hidden by the Easter Bunny.

And then there's the Tooth Fairy.

Of course, Cubby complained. I told him that I'm pretty sure the Tooth Fairy stops coming if you complain. Then he asked me if I was leaving him the quarters. Luckily, I could truthfully say that I had put no quarters in his room. Then he asked A. and I distracted him by asking him if he wanted to help me finish dinner.

Distracted, but not forgotten. I just found a note on his bedside table that read:

He hasn't lost another tooth yet, so I'm not sure how A. is going to handle this. I guess he just won't sign. I certainly won't.

* I took the liberty of correcting the spelling here for you.
Posted by Kristin @ Going Country at 10:19 AM 5 comments: