It is currently five whole degrees, with about a twenty-mile-an-hour wind. The windchill is something like 20 degrees below zero.

Inhospitable, to say the least.

I knew it was going to be awful today, and that it would be an inside playing day for the children. I knew it, though I was not enthused about it.

However, when Cubby and Charlie got up and saw the inch of snow on the ground, they were insistent that they wanted to go outside. I tried to explain about windchill and how it was much colder outside than it looked. Cubby said he would wear all his outdoor clothes. I told him that the cold with this kind of wind was actually dangerous and that he wouldn't be able to stay out for any significant period of time without serious discomfort. He insisted that he loves the cold and wanted to go out.

We spent a good five minutes putting on every piece of outdoor apparel they own, making sure their coats were zipped all the way up and that their snow pants were tucked down into their boots. Then out the door they went.

Literally eight minutes later, I heard them come crashing back into the front hall. When I went in there to help Charlie shed his snow stuff, Cubby looked stunned and asked, "How cold is it outside again?" Followed by a dramatic, "Get me by the woodstove! My hands are freezing!"

Told you so. But at least I got those eight minutes.

* This is solely because everyone else was still asleep, leaving me the only arbitrator of the heating-vent disputes that had been occurring continuously for an hour already. Sure, kids, go outside! At least I'll get five minutes of quiet! Totally worth a frost-bitten nose! (Joke. Obviously.)
Posted by Kristin @ Going Country at 6:09 AM 2 comments:

I woke up at 4 a.m. to Charlie yelling for milk ("Haha, NO, GO BACK TO SLEEP," is how that response went) and couldn't get back to sleep, so I got up at 5 a.m. and did some Level 3 shredding.

Then I picked up random out-of-place things and dusted. I made breakfast and packed lunch for A. I brought in a wheelbarrow-load of wood from the shed. I vacuumed the downstairs and the stairs. I did two extra-large loads of laundry. I did some dishes. I started dinner. I swept the kitchen floor. I mopped the wood floors in the living room. I fed children, dressed them to go outside, undressed them when they came in, entertained a baby who refused to take a morning nap, drove with all three kids to the gas station, the bank, and the library . . .

And then I put in a video for the children, provided them all with one whole raw carrot, and retired to the dining room to mess around on the computer and drink some gin.

So that's where I am now. Happy Friday! How are you celebrating?
Posted by Kristin @ Going Country at 2:42 PM 2 comments: 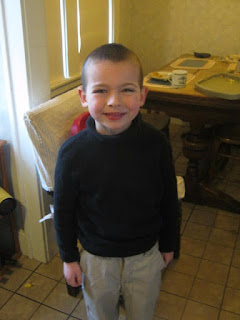 Happy birthday to
the astonishing Cubby.

"Good Enough" Is My MO

Tomorrow is Cubby's sixth birthday. It is also the last day of school for him before Valentine's Day, so there will be a Valentine's party as well as his birthday celebration at lunch.

The MiL, kind Grandma that she is, offered to make whatever I would be sending in for his birthday treat. She suggested that since it was also going to be the Valentine's celebration, maybe she could make sugar cookies in the shape of hearts. And then she brightly suggested that I could then write out each child's name on a cookie with frosting and that could double as a Valentine's card!

Not that it isn't a good idea. It is. It's a great idea. But I am not about to be writing 28 names in frosting and trying to fit the long names on a two-inch cookie. I'm all about knowing my limitations.

So I frosted the cookies and dumped some red sugar on them instead. 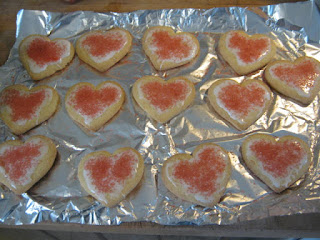 Hey, at least the cookies are homemade. And thank God for the MiL, because honestly, I wouldn't have even made the cookies myself.

What's that? My high standards are intimidating you? I know. It's okay.

And on a related-but-not-really note, I just got an e-mail from the school that they thought it would be fun to do one of their "Pretend Restaurant Days" at lunch as part of the Valentine's celebration, so the kids can all practice their best table manners and so on. So the children are supposed to dress up. I realized that I send Cubby to school almost every day in corduroys, a collared shirt, and a sweater, so I . . . can't actually dress him up anymore than he normally is.

I don't know if this means that he's usually too dressed up, or that I need to have dressier clothing for him than I do.

Whatever. Who cares what he's wearing? He'll have cookies to pass out! With colored sugar! Hooray for me! And Grandma. Mostly Grandma.

Labels: all about me, confessions, Cubby, fun with food, MiL, randomness, school

Emphasis on the "Country"

I decided on a whim today to vacuum out my minivan. Two kids at school, the third asleep, and 33 balmy degrees outside? Sounds like vacuuming-the-van time to me!

I mean, I did just do it seven months ago, but it could stand another cleaning. Ahem.

As I was hauling out the vacuum and getting to work, I decided that I should just dispense with the "Town" part of my Town and Country minivan. This minivan ain't nothin' but country.

To start with, I had to go into the duck pen to unplug the extension cord from the heated water bucket so I could plug in the vacuum. That is not the way you start vacuuming out a vehicle in town.

Then I started sucking up alarming quantities of leaves, rocks, and mud. Nary a McDonald's french fry to be found. We live fifteen miles from the nearest McDonald's, so their food will not make its way into my minivan. (Also, I find their food revolting, but that's a separate issue.)

I found at least half a dozen of those pointy snail shells that the kids tend to collect on our beach, along with a screwdriver under one seat and a rusty screw under another.

Was the screwdriver used to take the screw out? Possibly. I just hope the screw didn't come off my minivan at some critical place.

I also had to vacuum up some flaked off rusted metal from the back door, because my van is decaying at an alarming rate thanks to the salt used on winter roads around here. I figure the body of this vehicle is going to give out before the engine. It's pretty bad.

It took me about half an hour to get the interior in a relatively clean state. Clean for a country minivan, anyway, which is all I can hope for.
Posted by Kristin @ Going Country at 9:03 AM 2 comments:

Labels: all about me, manual labor, randomness

The Problem with Nutmeg

I love nutmeg. The taste, that is. Grating it? No. That, I do not like. Anything that has to be done on one of those really fine microplane graters--citrus zest, Parmesan cheese, nutmeg--is almost guaranteed to be a pain in the ass. But I love the taste of nutmeg in custard and so on enough that I take the trouble to grate the little nutmeg nuts*.

But I always, ALWAYS drop the damn nut into whatever I'm grating it into. I don't know if I have particularly clumsy fingers or what, but the nut inevitably slips from my fingers and sinks into the wet mixture I'm grating it into, requiring me to go fishing around in raw eggs and milk with my fingers to rescue it from the bottom of the bowl.

The recipe I made for bread pudding just now--to use up some random white bread the MiL had bought for church communion bread--required a full teaspoon of grated nutmeg. That's a lot of nutmeg. And a lot of opportunity to drop the nut. But I only dropped it once! Yay for me!

Should be good bread pudding, though.

* Incidentally, have you ever seen the inside of the nutmeg nut? It's got these little dark squiggles running through it. It's cool. Here's a page with a photo that is much better than anything I could ever take.