Bowing to the Inevitable

Almost invariably, anyone who observes Cubby and Charlie in their natural element--that is, at Blackrock--makes some remark along the lines of, "It's so great you let your kids get dirty. Good for you."

My response to this is always, "Let them? You think I could stop it if I tried?"

No. I could not. Short of locking them inside the house and keeping them on leashes when they're outside. Neither option appeals to me, so they will go outside and they will get filthy. No question.

Though maybe the mud puddle is pushing it a little bit . . . 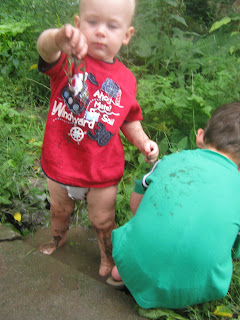 Charlie found a worm, which I admired appropriately. From a distance, because I'm not so into the invertebrates. 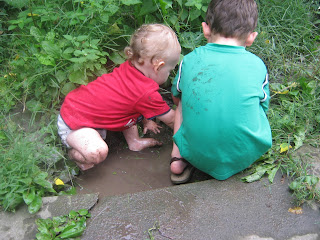 Literally down and dirty is the only way to go when you're under five and have access to mud. 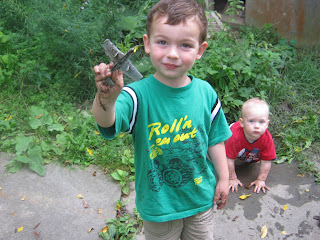 The plane also got a mud bath. It was great for his pores.

Yeah, my kids are dirtier than most. It can't be helped. Sure makes for a lot of laundry, though.

It always kind of messes with my mind to look at my small boy children and imagine that some day in the not-too-far future, they will be as big as their father. A. is not a small man, and I'm pretty sure my sons will not be small, either.

But it's hard to believe when I see things like this: 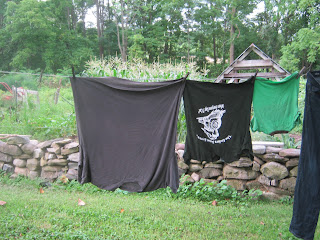 When the day comes that the wearers of those two small shirts on the right can wear that shirt on the left, you may find me crying a little inside. Or maybe hiding, because the testosterone is going to take over the world.

Today's Sunday Family Fun was an outing to a nearby state forest. The same state forest, in fact, where A. and Cubby went canoe camping over Father's Day weekend. A. actually led us right to the same site they camped on that trip (accessible by foot as well as canoe), where he proceeded to build a fire, using some of the pile of sticks they had left behind previously.

A. had one of those big sticks in his hand when Charlie started crawling towards the fire, no doubt bent on self-immolation. So A. reached out with the stick in his hand to block Charlie's progress. And Charlie SCREAMED.

It was not the "How dare you thwart me!" scream with which we are so familiar. It was an "OWWWWW" scream. I thought maybe A. had accidentally poked him in the eye or something. But when I pulled him onto my lap, I saw the hornet on his hand. And I pulled the hornet's stinger out of Charlie's pinkie.

Yeah. I would scream, too.

A. found a ground hornet nest under the pile of sticks he had been using, and there were quite a few pretty pissed-off hornets buzzing around. So he moved the fire on top of the pile of sticks, which took care of the hornets.

It wasn't until a few minutes later that I noticed Charlie's lip was swollen. Poor little dude got stung right on his top lip, in addition to his finger.

Surprisingly, the crying only lasted maybe thirty seconds before he forgot about it and started crawling around again. I would have wailed longer than that. Those are some tough little boys I have.

Good thing. This is no kind of life for a delicate child.
Posted by Kristin @ Going Country at 5:30 PM 3 comments: