The other day Cubby dressed himself in what he referred to as his "first costume."  I don't know what the second costume might be, but it would be pretty hard to top this one: 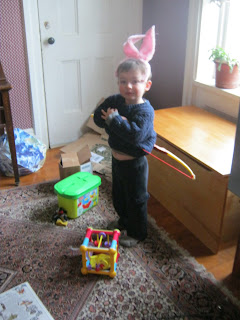 In case you're having trouble figuring out what's going on there (as did I), those are the bunny ears and a bow (as in bow and arrows) he put around his waist.  Shortly after this picture was taken, he started dancing around.  So maybe the bow is supposed to be like a tutu?

Hell if I know.  Your guess is as a good as mine.

And speaking of the little dictator there, he had an outing today with his father and A.'s friend Jodi and Jodi's five-year-old son.  They went to ride toboggans.  It was all very wholesome and nice for the children.  Except for the junior pissing contest that occurred, with Cubby insisting he was boss and the other boy insisting he wasn't.  And then A. ending the argument by saying HE was the boss.

I don't understand boys.  Too bad I have two of those confusing creatures.

Speaking of that second boy, when I was changing Charlie this afternoon, I pulled off his diaper cover and discovered . . . a screw.

First I find hardware in my frittata, and now in my son's undergarments?  WHAT is going on around here?

I have no idea how that screw got in Charlie's diaper.  I'm just glad it wasn't a sharp-tipped one.  And now I'm going to equip Charlie with tools, since obviously he needs them for self-defense. 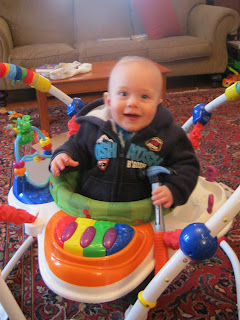 Just don't put that hammer in your diaper, okay?

Cubby and I have had many, uh, spirited discussions this winter about putting on appropriate clothing to play outside. He just does not want to wear what a normal person would put on to stay warm in the winter.  He insists he likes being cold.

Given his penchant for arguing and pigheadedness, I have not been convinced by this statement.

I gave up on the mittens a long time ago. I very rarely insist on his insulated hiking boots, instead letting him put on his flimsy rubber boots (which do have the benefit of requiring no assistance from me to get them on and off). I don't always make him wear his hat.  Usually I manage to get his coat on him, at least.

Then last weekend, A. had to go to the north country for something and he took Cubby with him. There was two feet of snow on the ground up there in the Adirondack Mountains, and more was falling when they arrived. A. opened the car door and Cubby shot out of the car right into the snow in nothing but his boots, pants, and sweater. No coat. No hat. No mittens. No snow pants.

He spent almost an hour floundering around in the deep snow in no protective clothing whatsoever, exclaiming, "This is GREAT!"

When A. and Mr. Jason were sugarin' this past Wednesday, which required standing outside all day in a disgusting and bone-chilling mixture of snow and rain, Cubby asked to go outside and then spent the next three hours splashing through freezing puddles and getting totally soaked, down to his underwear.

He came inside with his legs red from the cold, happy as can be, and informed me that he loves getting cold and dirty.

At least this means I no longer have to spend ten minutes wrestling him into snow gear every time we go outside.
Posted by Kristin @ Going Country at 6:27 AM 3 comments:

Charlie is showing no signs of crawling yet--I fear he might skip the crawling and go straight to early lurching like his big brother, God help me--but he has gotten quite vigorous with his rolling and thrashing.

It's no longer enough to put down a sheepskin for him on the floor.  There must be a large blanketed area to have any hope of keeping him off the filthy floor, and even that's not always a sure thing.

He spends a lot of time on filthy floors.  I tell myself it's good for his immune system.  Ahem.

The real area of concern with his semi-mobility is near the woodstove.  Obviously, I do not want my infant son to be rolling himself into our blazing-hot woodstove.  But he does so enjoy rolling about on the warm floor near the stove.

Luckily, we have an inconveniently large dog who also enjoys baking in front of the woodstove, and she serves as an effective barrier to baby burning. 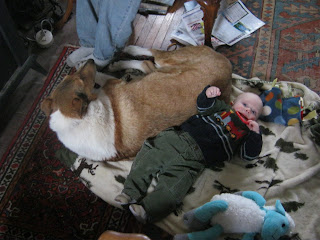 Of course, sharing a blanket with a dog kind of negates the cleanliness aspect of the baby on the blanket, but it's better than first-degree burns.
Posted by Kristin @ Going Country at 6:52 PM 6 comments:

Cubby Trauma is a new phrase I have coined.  It's a description of people's reaction to Cubby the first time they see him in action.  The symptoms are something like shell shock, I think.

Actually, it's more like the first time they see him in action and in full voice.  Both of which he is at all times.  He moves non-stop.  He talks non-stop.  He notices everydamnthing and asks questions constantly about those things.  He has a huge vocabulary, excellent pronunciation, and a surprisingly wide range of knowledge.

He is, in short, precocious.  Also exhausting.

The most recent sufferer of Cubby Trauma is our pediatrician.  I took Cubby in for his three-year check-up today.  The doctor walked in and spent the next two minutes listening to the Cubby and Mommy question and answer session that continues all day long:

"Where did the doctor come from?"  "From the hallway."

"What was he doing out there?"  "He was probably in his office."

"Because they get dirty.  Where's the stethoscope?"

Once the doctor closed his mouth that I'm pretty sure was hanging open in surprise, he said that Cubby seemed ready for kindergarten.  Then he looked at the computer and realized that this child is three years old.  Three.

Which is when the doctor remarked that I might find it a little difficult with Cubby before he started school*.

Straight from the medical professional, ladies and gentlemen.

Cubby weighs 34.5 pounds and I have no idea how tall he is since at that juncture in the measurements I was focusing on keeping Charlie from vaulting off the exam table he was lying on.  We'll have to re-measure him at home.

Then, to celebrate Cubby's good health (and good behavior, because he was actually very well-behaved, just loquacious as always), we went to get french fries at Wendy's.

Okay, so the french fries were for me as much as him.  But whatever.  A good time was had by all.

* Thanks to Cubby's February birthday, he will not start kindergarten for TWO AND A HALF MORE YEARS.  Help.
Posted by Kristin @ Going Country at 10:55 AM 9 comments:

The most amusing part of my day today was when I realized that I had inadvertently dressed my sons in almost identical clothing.  Both Cubby and Charlie were wearing navy blue cable knit sweaters and jeans.

Obviously, I need to branch out in my sartorial selections for my children.

Of course, I decided that since this was SO FUNNY to me--because I definitely don't get out enough--I should get a picture of the two of them together.  Unfortunately, my only opportunity was when Charlie had rolled off the cozy sheepskin I had put him on in the kitchen, leaving him flailing on the cold hard floor, totally at the mercy of Cubby the Destroyer.

So instead of rescuing Charlie, I grabbed the camera and took some pictures. 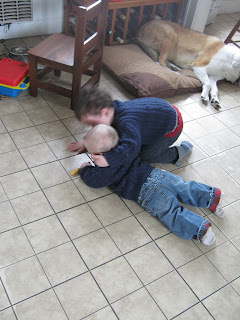 Mia the Headless Dog was no help, either. Sorry, Charlie.

And . . . that was pretty much it for today.  Tomorrow I have to take both kids to the doctor for Cubby's three-year check-up.  Which will pretty much guarantee more excitement than we had around here today.