Far Be It from Me To Leave You Hanging

Because I know you were all out there pounding your desks and yelling at your computer screens, "But what about the rooster?  Did he make it?  WE MUST KNOW!"

Or maybe that's my imagination again?  Whatever, I'm happy to tell you that the rooster has been steadily improving ever since returning from his attempted abduction and this morning, I heard him crow.  It was sort of a weak crow, but it was a definite sign that no damn fox is going to get this rooster down.  You think you can kill a rooster by breaking his bones and puncturing his throat?  HAHA!  He spits in your wily little face, fox.

I would also like to announce that there is STILL part of that mushroom in our refrigerator.  Given its size, it is perhaps not surprising that we can eat mushroom things for almost a week and still have a quarter of a mushroom left, but still.  It's the mushroom that never ends.  I dig it.  They should sell mushrooms this size at the store.  Though it is entirely possible I'm the only one who would buy them.

And on an unrelated note, we're in the process of deciding which mountain man Cubby is going to be for Halloween.  I mean, you KNOW he has to wear the coonskin cap for Halloween, right?  And everyone will assume he's Davy Crocket, but there's a whole bunch of other awesome mountain men he could claim to be.  Should he be Jeremiah Johnson?  Jim Bridger?  Or Jedediah Smith?  A.'s favorite is Jim Bridger. I vote for Jedediah, but only because I like saying the name.  Cubby doesn't care; he just wants to be some guy who traps.

What say you, duckies?  If you have a minute, go read up on those guys and tell us which one you think deserves to be honored by Cubby's Halloween costume.
Posted by Kristin @ Going Country at 10:55 AM 6 comments:

Yesterday when I was in the kitchen picking through the last of the sad-looking tomatoes from the garden and cooking the usable ones into sauce, A. came downstairs and announced he had a present for me.  Since A. doesn't really DO presents, I didn't get all excited and expect a diamond necklace or something.

Good thing.  I would have been terribly disappointed, because what he presented to me was one of those pocket-sized daily appointment calendar things that he had gotten free from one of his professional organizations.

To appreciate the hilarity of this gift you must understand that I am probably the least-scheduled person in America.  In fact, I go to great lengths to avoid anything that involves meetings or obligations.  Which is why when A. told me he had an appointment calendar for me, I immediately fell all over myself laughing and said, "What the hell am I supposed to put in it?  Story hour?"

The preschool story hour I attend with the kids at the local library is literally my only scheduled event.  And so far, I've managed to not forget a single one despite my lack of appointment calendar.  But now I can dutifully fill in my story hour obligation every Wednesday morning and relax knowing that now I'm not responsible for keeping all that information in my obviously-deficient memory.

What a relief.
Posted by Kristin @ Going Country at 6:09 PM 7 comments:

A few days ago when Cubby and I were eating lunch in the kitchen, I looked out the window and saw a puffball mushroom on our neighbors' lawn.  Our neighbors do not live particularly close, so you may wonder how I could see a mushroom on their lawn from our house.

If you're wondering that, you've obviously never seen a puffball: 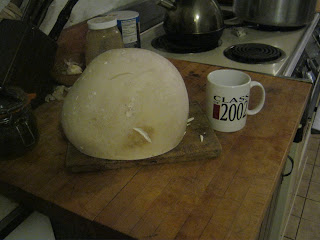 The MiL also noticed the enormous mushroom and actually called our neighbors to ask if we could have it.  Luckily, they're used to our weird and woodchuck-y ways--and also neither of them like mushrooms--so they were more than happy to let us have this fungus the size of a soccer ball that was growing in their grass.

A. harvested it yesterday and the MiL cooked some for lunch.  The fun thing about a mushroom this size (and incidentally, that photo was taken after we had eaten some of it, so that's not even its full size) is that you can cut slices off of it that are basically mushroom steaks.  It's cool.  Also yummy. But only if you like mushrooms, because puffballs are very mushroom-y tasting.

With the exception of Cubby, all of us do enjoy mushrooms, however, so we were quite happy with our mushroom steaks.  And now I have 3/4 of a soccer ball mushroom to dispose of as I see fit.

I think I see a mushroom lasagna in our future . . .