Long version: I never make tacos from pork, but I had the awkward bone-in part of the sirloin roast left from when I cut some off to make stir-fry, and there's really no way to get the meat off that sort of bone cleanly except by cooking it long enough that the meat pulls off. So I did that with some tomato juice and taco spices.

I made the pinto beans because I am currently experiencing a glut of dried pinto beans. It not being long-cooking bean weather, I haven't been making them much. I still have a couple of pounds from the bulk bin that I bought several months ago. Then A. came home with a 25-pound bag of them when he was at the store a month or so ago. And THEN, our neighbor came by selling pinto beans and chilis as a fundraiser for the high school, and of course we bought some. Beans, I mean, not chilis, because I cannot handle New Mexican chilis.

Anyway, the point is that I have a ton of dried pinto beans on hand that I need to start working on, so I cooked some. I used Miss Amelia's trick of cooking a Russet potato with the beans to make them extra-creamy and they were very good.

The carrot ribbons were just, uh, carrot ribbons--made with my vegetable peeler--that I pickled for a few hours in salt and vinegar. I like to have something crunchy to top tacos with, and I didn't have any lettuce or cabbage on hand. The slight sweetness of the carrots was particularly good with the pork.

Long version: Cubby informed me early this day that he knew how to make biscuits and told me that all I needed was flour and water.

Oh, really? Are we talking about edible biscuits here?

Turns out he had been reading a book about the Revolutionary War * that gave instructions for making hardtack. The book says right off that "They have nothing to recommend them other than a long self life," but Cubby really wanted to try it.

So he made hardtack--with my help--by mixing together flour and water and kneading it for ten minutes until it was stretchy, then poking holes in the top with a fork and baking it. That's it. Not even salt. I baked them about ten minutes longer than recommended, and they still weren't as hard as they should have been, but everyone was hungry and I didn't want to wait longer for them.

All the boys ate a hardtack biscuit, Cubby remarking that he could eat a few of them, but I noticed that after that one, he stuck to the baking powder biscuits that I had made. With salt, butter, and milk in them.

Charlie, however, ate another hardtack biscuit. I think he mostly liked dunking it in his milk. They had asked me how the soldiers ate them if they were supposed to be as hard as a rock, and I said they usually soaked them in water or coffee first. So then, of course, everyone was dropping hardtack in their cups of milk. Whatever.

Long version: A couple of hours before dinner, I was (silently) lamenting the fact that I had nothing for a vegetable except more frozen peas. So I decided the time had come to start harvesting the pumpkin patch.

The pumpkin patch consists of the entirely too exuberant volunteer squash plants that have taken over the backyard under my clothesline. There are several different kinds of squash out there, though we have no idea what any of them are. Some look like small pumpkins, some look like orange spaghetti squash, some look . . . weird.

Anyway. The small pumpkins started growing first and have fairly hard skins already, so I harvested one and cooked it. Half of it I cut into cubes to roast with some of the tart green apples from the tree at our new (abandoned) house next door. The other half I just put cut-side down in a casserole dish and cooked it in the oven until it was soft.

I had no idea if the pumpkin would be at all tasty, but it wasn't bad. Kind of bland. I particularly liked it with the apples, actually, so I'll have to do that again.

The cucumbers came from Rafael, who stopped by about an hour before dinner with a bag of cucumbers and summer squash for us. Better than a CSA.

The peanut butter cookies were from Cubby's cookbook, and are useful because they contain no flour. They are nothing more than sugar, peanut butter, eggs, and M&Ms. Cubby mostly made them. 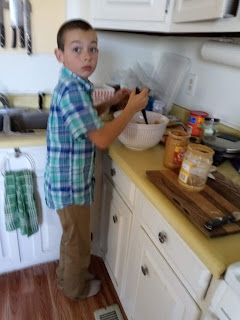 And looks rather surprised to be doing so.

Long version: These country-style pork ribs were really hard to cook because they were so varied in size. A couple of them were at least two inches thick, some of the others were barely half an inch. I got them all done in the end, even if it was kind of in stages.

The children were not pleased when they sat down to a tablespoon of mashed pumpkin each. Even with plenty of butter and maple syrup mashed in, Charlie treated us to a masterful dramatic performance of Death By Pumpkin and finally managed to eat the whole two bites. As he was clearing his plate, he scowled at me and said, "Don't ever serve me squash again, or it will kill me."

Long version: This would have been a wonderful meal to welcome my parents when they arrived for their short visit, if I had had enough tomatoes. I started making everything in the morning and found I only had one can of tomatoes left. So I mostly used that to bake the meatballs, and the pasta had only a token amount of sauce in it. There was plenty of butter and Parmesan cheese, though, so it was all good, if a bit dry.

Long version: It's chili season in New Mexico! My dad took advantage of this fact to buy me some green chilis when they drove through Hatch, New Mexico on their way to our house. Hatch is famous for its chilis. They even have a chili festival every September.

So my dad asked if I wanted some chilis, and I was all, "Hell yes! Maybe ten pounds?"

Do you know how many chilis are in a ten-pound bag? A shitload of chilis. Dozens and dozens. My dad hauled in this huge bag, and I was all, "THERE IS NO WAY THAT IS TEN POUNDS OF CHILIS."

It was actually twelve pounds, but still.

So my dad and I charred a few over the burners of my propane stove, then pulled off the charred skins. I removed most of the seeds to make them milder. He left his in, to make them hotter, and they were very good.

I think he's going to be taking some chilis home with him, though, because seriously. That is a LOT of chilis.

It's been awhile since I've made tortillas, mostly because of the heat. But I had to do it this day, because when my parents came, my dad brought the tortilla press he made for me. 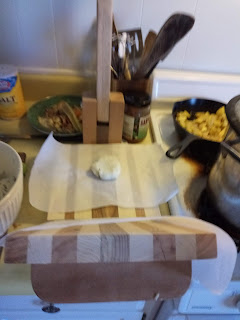 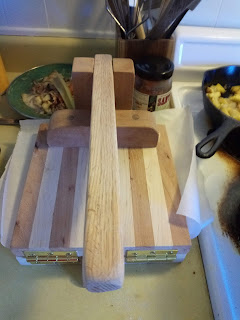 It was fun. And efficient. I made enough tortillas for the eight of us that I even had one left over, for the first time ever. So of course, I ate it as I was cleaning up the kitchen. I mean, wouldn't you?

When my parents are visiting, we can have dessert on a day other than Sunday. The pie was another of the Village Pie Maker pies provided at the place my parents stay when they visit us. Those really are good pies.

Long version: My parents wanted to buy us dinner at the (only) restaurant in the village, so we mostly all had hamburgers, corn dogs, and french fries. And we took it to go to eat at the place my parents stay in the village, because dining in house with my four children is not my idea of a good time. Much better to go eat outside on a patio where they can spill milk and drip ketchup without raising my blood pressure.

Bad News for Our Cream Consumption


As everyone knows, having one's coffee the correct way is a very serious matter. A. and I both put cream in our coffee. Given the amount of coffee we drink--which is a lot, thanks to the two puppies + four children situation we are currently in--that means we use a lot of cream.

Luckily for us, the tiny grocery store ten miles away carries cream.

Unluckily for us, I just found out that the tiny grocery store ten miles away will be closing at the end of December. This means we will be sixty miles away from cream, produce, and, well, pretty much everything else.*

* Barring a last-minute sale to a new owner, that is. However, considering that the business has been for sale for over a year with no buyers, I'm not counting on that.
Posted by Kristin @ Going Country at 12:05 PM 12 comments: