Friday Food: Back To the Elk

Long version: Those on Team Refried Beans include Cubby, Jack, and me. Team Eggs is A. and Charlie. Poppy chooses as the mood strikes. This night, she chose beans.

Everyone's on Team Tortilla. At least, when they're homemade.

Long version: I marinated the elk pieces in soy sauce, vinegar, corn oil, and garlic powder before searing them and adding them to the frozen bag of stir-fry vegetable mix. The sauce in the stir-fry itself was all the things in the marinade, plus peanut butter.

When I make stir-fry, I pull out some meat for Charlie before I mix in the sauce and he eats that with plain rice (plain except for butter, that is), and some frozen vegetables. This time, he ate some meat and then turned to me and said, "Good job with the meat, Mom. What is this?" And both Cubby and Jack went back for more meat. Not even rice. Just meat.

You know what this means, don't you? It means I win the elk disguise medal.

That's a thing, yes. A thing that I just made up. 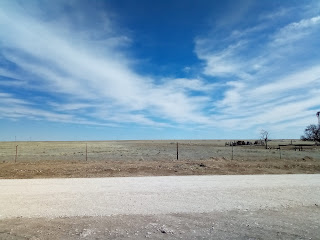 This was meant to be a photo of Cubby riding Samson in our neighbor's pasture across the road, but he's so far away, it's mostly a photo of the startlingly blue New Mexican sky.

Long version: I haven't been making a Sunday dessert in order to impose some Lenten penance on the children. But Cubby keeps finding a way to ensure a dessert, anyway. He went for a walk with Jack earlier in the day, during which Jack got hot and Cubby promised him root beer popsicles if he would walk back home.

I thought this was actually a pretty good idea for the flat root beer that's been taking up space in the refrigerator for two weeks now. Better than cooking it with pork, anyway.

I don't have a popsicle mold, but I do have extra ice cube trays and toothpicks, which is what my mother used to use to make us orange juice popsicles. 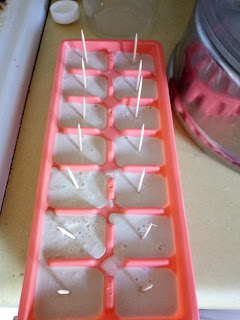 I decided the root beer would benefit from being mixed with heavy cream. To make it sort of like a root beer float, I guess. I also added a tiny bit of vanilla. After mixing those things, I filled the ice cube tray and froze it for about forty minutes, by which time it was frozen enough to hold the toothpicks up straight when I stuck them in.

They weren't bad, actually. The texture wasn't too hard. Kind of icy, like an Otter Pop or something. The kids loved them. Except Poppy, who decided they were too cold.

Long version: It's a Monday/workday! Let's scrounge for leftovers!

So Cubby and Jack finished up the stir-fry and rice. Charlie had some goulash meat and frozen green beans. I had a couple of fried eggs and frozen stir-fry vegetables. Poppy had everything, because she kept seeing what other people had and demanding it.

All the children also had bread and butter. To fill in the corners, I suppose.

Long version: A. bought a tube of breakfast sausage when he was at the store last week. I used some of it to make a pasta sauce with tomatoes, garlic, oregano, and basil, which I mixed with some cooked elbow pasta and a bit of grated cheddar cheese. Just before baking it, I decided it would be too dry, so I poured in a little cream and milk, then I topped it with a layer of cheese.

It was tasty. Unsurprisingly.

For myself, I mixed some of the meat sauce with those oh-so-handy frozen stir-fry vegetables (however did I get along without them?) and a little cheese. Also tasty. We'll call this one "Girl With Truck."

Long version: Roasted potatoes would normally be too ambitious for a worknight, but these were potatoes I had previously peeled, cut into chunks, and partially roasted, then froze. This is one of the best ways I know of to preserve potatoes. All I had to do was shake them out of the bag onto a pan, and then continue roasting them for another half hour or so until they were crispy.

Long version: For the children, I diced the remaining two hamburgers and heated them up with some of the leftover goulash sauce. They ate that over the mashed potatoes.

For me, I heated up the remaining sausage tomato sauce with some frozen vegetables and cheese. A satisfactory way to clean out the refrigerator.


Yesterday while I was on lunchroom duty in the elementary school, wiping applesauce off the floor and reminding the kindergarteners for the 26th time to please stay in their seats and eat their food*, Charlie came over to me and asked, "Hey, Mom, do you know what would happen if a watch and time had a fight?"

Not really being in the mental place to give such a question much thought, and also not really sure what he was talking about, I asked back, "No, what?"

"Because the watch would eventually stop, but time goes on forever."

That was not really what I was expecting, but I had to acknowledge the logic of his philosophical train of thought.

And then he went back to his peanut butter and jelly sandwich, no doubt to mull over the meaning of life and the purpose of human existence. At least until recess, when the game of tag on the playground drove all the philosophy out of his head.

* Yes, being a teacher's aide is pretty much just like being a mom. Except I get paid to wipe up applesauce and nag at the school.


Way back in December when we went to cut our Christmas tree near our neighbor's canyon, Charlie called me over to take a look at something. That something was this: 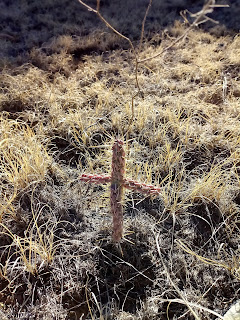 Yes, it's a cholla in the shape of a cross. And yes, it is pink.

Even though we found it around Christmas, it seems more appropriate for this Sunday in Lent.