How They Took It


So how did Charlie and Jack react to being left out of the Great Arizona Trip?

That's right. I braced myself for tears and shrieking and got nothing. Not even a, "Why can't I go?"

Never have I been more surprised. And pleased.

I assume the travelers made it to Tucson late last night, though I only know for sure they made it as far as Atlanta, because that's where A. called me from early last night. He briefly mentioned that the exhaust more or less fell off the Subaru completely when they were on the road in Canada and he had to wire it back on and drive very carefully the rest of the way to the airport.

Good thing it happened to him and not me, because I doubt I would have been able to jury-rig anything like that on the side of the road.

I had my own driving anxiety this morning as I drove the three home children to the pediatrician's office to get Jack's suddenly very swollen eyelid checked out*. I had no reason to believe there was anything wrong with the Honda, but I really do not like driving 50 miles with small children and no one at home to call if anything does go wrong.

Not that I could have called anyone anyway, because A.'s cell phone stopped working right before his trip, so he has mine.

Funny how we all drove around without cell phones all the time until only about five years ago, but now it seems like a very daring thing.

We made it to the doctor's office--and the pharmacy--and home again with no trouble. The MiL is coming today to stay the night and provide some distraction, for which I am very grateful. Even if the two younger boys were incredibly good about not going on the trip, it is true that without their older brother and dad around, there's just not a lot of excitement. There's only so much I can do with a baby in arms. Especially a baby who is still up all night. 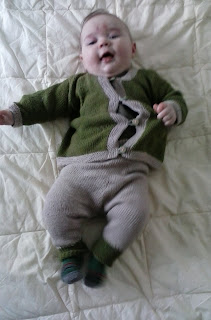 Maintaining those cheeks is a round-the-clock job, you know.

Only 3.5 more days until A. comes home. Not that I'm counting. Ahem.

* I could see yesterday that there was a sty there, but it was worse this morning and looked infected, so I brought him (and everyone else) in and came home with antibiotic eye drops. So fun to administer to a three-year-old.

Labels: all about me, Charlie, confessions, Cubby, family, Jack, MiL, Poppy, the A team, travelin'


When A. and Cubby left this morning at 6 a.m. to start their cross-country odyssey, it was 63 degrees at our house.

Even crazier? At their final destination in Tucson, Arizona, it was 34 degrees.

So much for the frozen north and the burning desert. (This happened last year, too, though.)

It's temporary, of course. We're supposed to have a high of 30 degrees on Friday, so as soon as Charlie and Jack were dressed and fed this morning, we went outside where Charlie promptly wiped out on a patch of ice* and somehow cut his hand on a rock or something.

I cleaned up his hand and he came back outside to sit in a chair and watch me scoop poop.

We went to the library after that and while we were inside, it started to rain. So I think that's it for our early spring. It was nice while it lasted, though.

* How there can still be patches of ice when it's been above freezing for days is beyond me. I guess it is still the frozen north, after all.

Labels: all about me, Charlie, Cubby, Jack, the A team, travelin', weather


A. and Cubby are leaving on Wednesday to go to Tucson to visit the various family members there. While I was checking the airline's carry-on rules, just to see if anything has changed since the last time we flew, I came across the TSA "What Can I Bring" lists. In the section for "household/tools," listed in between "Butane Curling Irons (cordless)" and "cell phones," is "cattle prods."

I am not making this up.

We have a fairly unusual household ourselves that includes things like skunk essence (for trapping) and ice claws (in case A. falls through the ice), but in no way can I see how cattle prods constitute a "household tool."

In case you were wondering, they're allowed in checked baggage, but not in carry-ons. Consider yourself informed.

* We're waiting until tomorrow to tell the children, because the wrath of the two other boys will no doubt be fearsome to behold. In the wise words of Scarlett O'Hara, "I can't think about this now. I'll think about it tomorrow." Wish me luck.