Friday Food: Making It Up As I Go

Long version: Finally used the stew meat that had been sitting in the refrigerator for three days. Very unusually, we had some red wine on hand, so I decided to make beef bourguignon using a recipe in a cookbook I bought many years ago by Julia Child and Jacques Pepin called Jacques and Julia Cooking at Home. And when I say I used the recipe, I mean I quickly looked at it to see which ingredients they used and in what order. And then used what I had and took it from there.

Long version: We have entered into a very happy season for me: Perpetual Lettuce Season. There is a large bag of washed and dried homegrown lettuce in the refrigerator at all times now, which makes having a vegetable for dinner much easier. 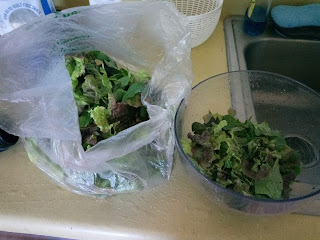 This is actually my lunch salad. Those are also much easier with the large bag of prepped lettuce always on hand. Hooray.

Long version: I was sick most of this day, but I still had to bake the bread I had started the day before. Sourdough bread dough has no mercy. I had taken out a package of lamb the day before to thaw, so A. made a marinade for that with some of his green garlic a few hours before dinner, then fried it on the griddle pan. Slices of fresh bread with butter, raw carrots, and everyone's fed even if Mom spent the day hiding in bed.

Long version: A. took the boys fishing with Rafael at this fishing spot we'd been to before. Despite many bites, Cubby was the only one who caught anything. He got a medium-sized catfish, which A. filleted and I fried in bacon grease. Cubby loves fish but rarely gets it in our land-locked rural home, so this was a great treat for him.

Long version: After A. made some beef jerky, I ended up with a couple of bones from the piece he had cut the meat from. So I made some stock, and when that was done, I pulled the remaining little bits of meat off the bones. To this I added the last bit of leftover lamb and green garlic diced up, three tomatoes languishing in a can in the refrigerator, onion, garlic, cumin, chili powder, leftover rice, some lamb's quarters Jack presented me with, and some cheddar cheese the children had abandoned during their afternoon snack because Poppy had dumped sand on it. 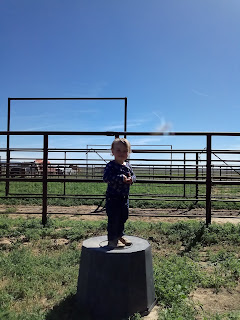 She wasn't sorry, either.

I rinsed the sandy cheese off and stuck it in the refrigerator, figuring I could find a use for it. I mean, I could have thrown it away, but it was like a cup of cheese! That's a lot of cheese! Cheese is expensive!

Anyway. I did find a use for it, and it turned out fine. The children ate the skillet stuff. A. and I ate the last of the beef bourguignon.

Long version: I had all that beef stock on hand, so I made a variation on Miss Amelia's green chili soup. She uses onion, garlic, carrots, celery, ground beef, and potatoes in hers. Plus the green chili, of course. I was out of potatoes so I used rice instead, and I added in some of the beet greens I had thinned earlier in the day. It's really the green chili that makes it taste good, anyway, and I used the last of the frozen green chilies Miss Amelia gave me, so it was the same soup in spirit if not in fact.

The cheese had no unfortunate run-ins with sand and thus didn't need to be melted to be palatable.

I was going to make cornbread to go with dinner--and Cubby was going to help me--but we ran out of time and had bread and butter instead.

It's okay, though, because Cubby made blueberry muffins for breakfast this morning, so he got his kitchen time in. 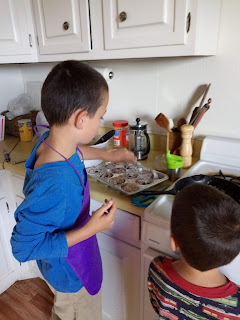 Jack was happy to enjoy the fruits of Cubby's labors.

Long version: Yup, still with the tortillas. Now that I've done it half a dozen times, I've mostly figured it out: 2 cups masa, 1.5 cups warm water, a sprinkling of salt. I press them with one of the metal pasta bowls the MiL gave me. I learned that it's much easier to use than a heavier skillet. I can grip it better, and also twist it a little while I'm pressing to make the tortillas thinner. Still not as easy as an actual tortilla press, but until I get the one my dad is making me, the bowl works fine.

I have also found that turning on the ceiling fan in the kitchen will keep the smoke detectors from going off. This was a very important discovery.


Although masonry is something of a family institution for us at this point, it is not an activity that I have personally engaged in. Until now.

Rocks are something we have in great abundance here. Not only are there nice white limestone rocks in the ground at various spots on our property, but there are larger ones that just litter the roadsides. It looks as if when they spread the caliche on the roads here, they push aside the larger rocks in favor of smoothing out the smaller ones. Thus, every non-paved road is lined on either side with the rejected larger rocks. A. picks these up whenever he has his trailer out and brings them home.

So then we have free building material.

Now, I'm not going to start fussing around with mortar or Portland cement and all that stuff, but if I need a border for my newly-created flower bed so it doesn't get trampled by rampaging children? I have rocks. 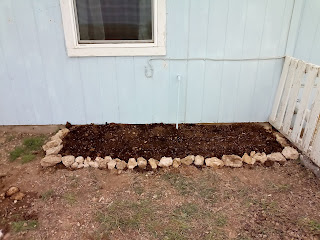 We won't talk about the fact that the actual flowers didn't come up in the flower bed. Let's just focus on the nice border, shall we?

Or when A. plants some olive trees and doesn't want them to be trampled by those same rampaging children? More rocks. 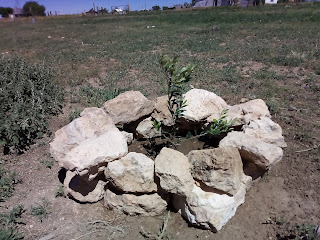 No, we do not live in quite a warm enough climate for olives, but A. has a plan for protecting them in the winter. Fingers crossed.

Or when A. plants a row of tiny peach seedlings* that will definitely get trampled if not protected and could also use a little shelter from the relentless wind? Rocks to the rescue. 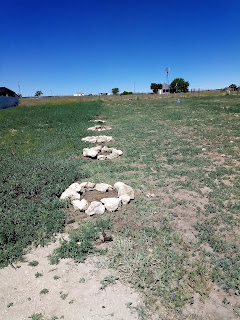 Please ignore the carpet of weeds, thank you.

I did all of those small enclosures myself, and I can see the appeal of stonework. It's very satisfying to fit all the pieces together. Kind of like a puzzle.

That said, my hands are definitely too weak--and my child-free time too limited--for any sort of large stone project. So I'll leave the chicken coop to A. and continue with my little protective rings.

* At least, we think they're peach seedlings. A. planted about 90 unlabeled pots with various kinds of stone fruit pits, apple seeds, and who knows what else, so it's going to be a bit of a surprise. They're almost definitely a stone fruit, though.