The day when I can clear out the depressing accumulation of winter boots, coats, hats, mittens, gloves, scarves, and snow pants that plagues me in the entryway right next to the front door all fall, winter, and into spring . . . 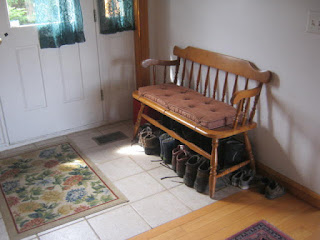 This is a sight that calms a clutter-averse mind.

Out with the winter apparel mess, in with lemonade on the front porch. 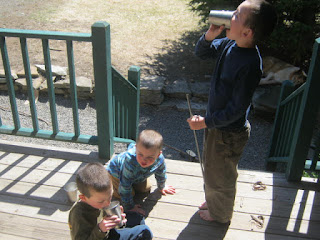 Happy boys on the porch; happy mom behind the camera.

Labels: all about me, Charlie, Cubby, domesticity, family, Jack, weather

On the Kindness of Neighbors


Remember the super-plow that swooped in after the monster snowstorm and plowed us out? Well, we never did get a bill. And then when we were visiting Ms. Rita's chickens and rabbits just last week, she happened to mention that she had seen the tractor go by after the storm and wasn't it nice of the farmers to plow us out.

Turns out, it was one of the two bachelor brothers that run a small dairy farm on the corner of our road. I had never seen that particular John Deere tractor out and about, but I took a close look in their farmyard and saw the very same tractor that had plowed our driveway.

I mean, he plowed us out over a month ago and we never even said thank you. Granted, I've never met either of the brothers and didn't even know their names. But still. Some gesture was in order.

So I made them some oatmeal chocolate chip cookies. That appears to be my go-to "thanks for removing snow for us" token of appreciation.

I brought the cookies over this morning and met the brother that was currently working in the barn. He wasn't the one who did the actual plowing, but he was happy to take the cookies. We had a nice chat about his farm and taxes and the future of dairy farming. His retirement plan consists of selling his 70 dairy cows and instead just producing small square bales of hay for sale.

Not many retirement-age people are planning on baling hay in their golden years, but I suppose if you've spent your entire life milking cows twice a day in this climate, haying might seem like a restful second career.

Also on the topic of neighborliness, there was a surprise in our mailbox yesterday. It was a self-delivered envelope from Emma-Friday, the dog that wasn't a stray. Actually, it was from her owner, Joe, but he had addressed it as from Emma, which I thought was really funny. Inside was a thank-you note from Joe expressing his appreciation for our kindness to his dog, and a $20 gift card to Tractor Supply*.

This was very unexpected. Nice, but unexpected. I mean, we did find and take care of his dog, but we also found her only a mile from her house, then drove her 250 miles away and kept her for a week. I was actually sort of embarrassed about that, and I was thinking if I was Joe, I might be kind of irritated about the situation. And here he is, dropping off a thank-you note and a gift.

Way to be, Joe. And Mr. Dairy Farmer. We lucked out on neighbors with this move, for sure.

* Tractor Supply is a farm store. It's like Target for country people.


Well, the garden has been started, and no thanks at all to me.

Because of debilitating but hopefully temporary back pain, there was no way I was going to be hoeing, raking, and planting seeds yesterday. Luckily, I have three willing helpers. 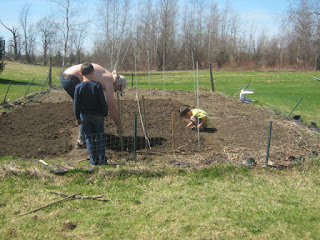 Jack would have helped, but he was napping. Just as well, as the help of a two-year-old is negligible at best and destructive at worst.

A. was willing mostly because he would be happy if I never again announced that I needed to drive to the Big Village for perishable food. Or, as he so eloquently put it, "I'll do it if I never have to hear about you driving 50 miles for five calories worth of leaves."

The man does have a way with words.

Whatever the reason, he did all the work, with Cubby and Charlie's enthusiastic if inexpert assistance. I sat in a plastic chair outside the garden and managed the operations.

In the end, the work itself was laughably easy. Accustomed as we are to the heavy, clay-based soil in the garden at Blackrock, which is choked by weeds even at this early stage of the season, prepping the light, sandy, and almost weed-free soil here seemed like a game instead of a chore.

At least, that's what A. tells me. I didn't actually wield the rake myself, but it sure looked a lot easier. He didn't even use a shovel to turn the soil over. Before I knew it, there were several rows planted to carrots, radishes, lettuce, arugula, snap peas, shelling peas, and "a lot of that gross-ass kohlrabi."

That was A.'s comment anyway. He just doesn't have the soul of a true vegetable gardener. Probably because he would always rather eat a lamb than a vegetable.

Lucky for him, I happened to have a large quantity of lamb already cooking for dinner that night (hooray for after-Easter sales!), so he was suitably rewarded for his labors.

And I will be rewarded for my excellent labor management skills by many pounds of fresh vegetables right outside my door in just a few weeks. Yay.

Labels: Charlie, Cubby, fun with food, gardens, the A team


On Friday morning, the day after we got back from our trip to Blackrock, I was sitting there watching Jack mess around outside and idly wishing I had more vegetables in the house. I had used up the more-perishable stuff before we left so it wouldn't go bad, which left me with carrots and cabbage and not much else.

What I really wanted, though, were some greens.

I was planning on going to the grocery store in the Big Village the next day to stock up on the exciting things they carry there that aren't available in the small grocery store in our nearest village. Things like the good cottage cheese*. And loose-leaf lettuce**. So, no greens until tomorrow.

But then, my eye fell upon the small dandelions just starting to grow in the rocks around the front steps.

I had remarked to the MiL when we were at Blackrock that I hadn't seen anything forageable (I think that's not a word, but you know what I mean) at our house. Not even dandelions. The dandelions were in full effect at Blackrock, of course, it being 250 miles south and therefore about three weeks ahead of us in spring growth. Also in full effect was the garlic mustard, which I used in some pasta sauce I made one night when we were there.

I suppose the week we were gone was enough to get the dandelions started here, though, and I had fortuitously brought up my bag of garden tools. So I grabbed my weeding tool, gave Jack a trowel to play with, and we went foraging for dandelions.

This takes awhile, as you have to wander around to find ones with good leaves, and then pick through them for some time to remove the bits of grass and leaves that always end up in there, and then de-stem them some. Plus the washing. Always multiple washings for anything that grows low to the ground like that.

After chopping them all up, I ended up with maybe 3/4 of a cup of greens. Not much on their own, but added to bacon, onion, carrots, frozen green peas, and a few of the last frozen tomatoes . . . 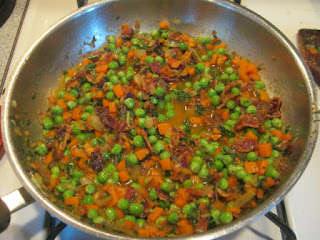 Vegetables (and bacon) for the win.

I mixed that with some of the rice leftover from the night before to make a kind of pilaf for lunch and man, it was good. I even shared it with everyone else, and they all thought it was very exciting to have a cooked lunch.

Well, except for Charlie, but I don't pay any attention to him anymore. And he ate it in the end.

Today we're going to do some planting in the garden, including lettuce, arugula, and radishes. Which means salads will soon be just feet from my door, rather than many miles.

Hooray for spring and growing things.

* The good cottage cheese is Daisy brand. It's the only one that doesn't have gross added stabilizers and junk, so it's the only one I'll buy. Too bad I have to drive 50 miles roundtrip to get it.

** The small grocery store does carry some bagged lettuce, but I won't buy that. It always tastes like bleach to me, and I'd rather go without lettuce than eat that crap. You may have realized by now that I'm really picky about food. Yup. My taste buds have been spoiled by too much good food to settle for a sad imitation.