Yesterday afternoon, one of our visitors announced her intention of getting all the makings for s'mores and Cubby said, "What's a s'mores?"

WHAT? My child doesn't know what s'mores are? What kind of mother am I that he's more than five years old and has never had a s'more?

Needless to say, we are remedying this grievous oversight tonight. And I will be eating one myself, of course.

This morning, I took Cubby to soccer practice. It was still pretty early, but HOLY GOD was it HOT out there. The sun was blazing away and it was incredibly humid thanks to the earlier thunderstorm. All the kids were running around dripping sweat and . . . I forgot to bring the water bottle.

Yes. Mother of the Year.

I made up for it--I hope--by making Cubby a really big glass of peach lemonade when we got home.

Plus, he's having s'mores tonight, which is way better than water.
Posted by Kristin @ Going Country at 10:39 AM 1 comment:

Do you remember in The Secret Garden when Mary goes exploring in the enormous old house and goes through whole wings of rooms that are closed off? There are lots of cobwebs and dust and mice and so on.

That's how the back part of our house is upstairs, on a smaller scale.

The front part of the upstairs is where our bedrooms are. Then there's a short hallway with a bathroom at the end. And just beyond the bathroom, there's a door leading to the former servants' part of the house. The door between the two parts stays closed all the time. There is no heat in the back part of the house at all--it's not even connected to the furnace heating system in any way--so we just don't use that part of the house.

There are three bedrooms back there, with a long hall leading to a back staircase. There are beds in two of the bedrooms, but mostly, that part of the house is unused except for storage.

Summer is when visitors arrive. Summer is when I have to clean the back part of the house at least enough so that people can, like, walk without falling over things or running headlong into cobwebs.

It's ugly back there. I begin with a broom to sweep away the masses of cobwebs. I shift boxes, piling them on top of each other so the hallway is mostly unobstructed. I clear away multiple pairs of boots and random detritus from the back stairs (why is there a racquetball racquet on those stairs when I haven't even played racquetball in over a decade?).

The end result is very, very far from immaculate. In fact, it probably looks much like a normal house might look before a cleaning. But then, this isn't a normal house. This is Blackrock, with 150 years of history and accumulated dirt. If you get a room without spiders, that's about all that can be hoped for.

And at least the food's good. That's what I tell myself, anyway.
Posted by Kristin @ Going Country at 8:26 AM 3 comments:

Labels: all about me, Blackrock, domesticity

Several months before any birthdays in this house, the MiL--our resident cake master--starts asking what kind of cake the birthday person might want. Conversations to that effect with Charlie went something like this:

MiL: What kind of cake do you want for your birthday, Charlie?

MiL: An ice cream cake? Okay, I can make that!

Oh, did you want ice cream, Charlie? Thanks for making that clear.

So we made him some ice cream.

Notice I said "made," not "bought." Because the MiL bought a fancy electric ice cream maker a couple of years ago that we've used maybe four times, and if the birthday boy wants ice cream, it might as well be homemade, right?

I woke up yesterday morning at 5:15 thanks to Jack. I briefly considered making the vanilla custard for the ice cream when I got up, but the idea of separating egg yolks and tempering eggs and straining and so on at 5:15 a.m. before I'd had any coffee was somehow not appealing.

Unfortunately, because the older children were up and raring to go at 6 a.m., this meant the custard then had to be made while they were around. Which meant they had to help me.

Have I mentioned I hate cooking with kids in attendance? I do. But I didn't let on that I was really impatient and just wanted to get this done without two little kids on chairs standing in my way demanding a mixing spoon. Instead I announced cheerfully, "Okay, guys! Let's make Charlie's birthday ice cream!"

And then I separated eggs and tempered eggs and strained things while dodging boys on chairs and finding separate things for them to mix.

Also, the recipe I was using was from The Yellow Farmhouse Cookbook, which is written by Christopher Kimball, the famously meticulous cook behind America's Test Kitchen. The recipe contains a rather major error in that it lists both milk and cream in the ingredients and tells how to make the milk mixture, but absolutely nowhere does it say when to add the cream.

I had no time to be looking anything else up, so I just added the cream to the milk mixture and hoped for the best.

At 4:30 p.m., after much fiddling, I managed to get the ice cream maker together (this is the first time I've done the part with the machine) and got it churning away. Forty-five minutes later, the ice cream maker stopped automatically, and there was ice cream. It was almost time for dinner, but I gave A. a small taste. He closed his eyes and announced reverently, "That is verging on the best thing I have ever eaten."

Then I gave Charlie the paddle to lick and Cubby the spatula I had used to scrape the paddle clean. 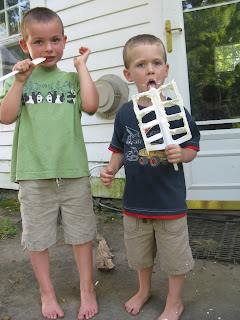 And there was much happiness in the land. 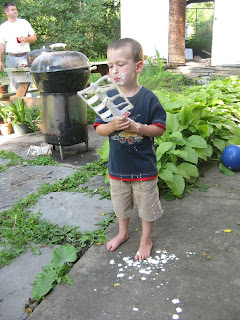 When you've got ice cream on your nose, cheeks, and feet, you know it's a good birthday.

Labels: all about me, Charlie, fun with food, MiL

This morning at 6:06 when the older boys came pounding down the stairs, already screaming and fighting over something. . .

Charlie: No! It's not my birthday!

Me: You don't want to be three? You want to stay two?

Charlie: Yes. Is there ice cream yet?

Me: I'm going to take your three-year-old picture! 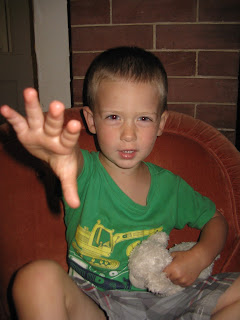 * And then he smacked the camera, which went flying. I don't think it's broken, even though the batteries came out.

For some months now, Cubby has had two often-repeated desires: To run in a race, and to be in a play. He did both yesterday, and they were just as exciting as he expected.

The run was a one-mile fun run that takes place every year as part of the village festival. A. took one for the team and ran with him, even though A. hasn't run a mile in a decade and his running shoes (in which he never actually runs) are coming apart at the soles.

A. coached Cubby on how to pace himself so he didn't tire out too quickly. Cubby walked for ten seconds (literally--that's how long A. told him he could walk, so that's how long he walked), but otherwise ran the whole way. He takes direction well, that Cubby. 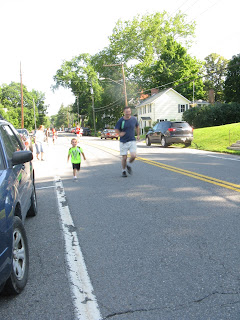 Next we should probably work his form, which rather resembled a marionette. But a determined marionette!

Cubby was sure he would win a prize. If there were a prize for fastest five-year-old, I think he would have. Unfortunately, his category was ten years old and under, so of course the top three were all ten years old. A., however, won second place for men between 30 and 39 years old. That is, men running with their kids. We told Cubby that the ribbon was really for him, since he kept up with Daddy. He was thrilled.

After a break at home so the kids could rest and A. could mow the lawns, we went back to the village to see a play that was being put on right on the field where the festival was held. A local summer stock company did a kind of mash-up of fairy tales.

Charlie wouldn't leave the bounce house, so A. stayed there with him. Jack was asleep in his stroller, which I parked in the shade. Cubby really wanted to see the play, so I stationed him in the front row of chairs and went back to where Jack was parked. I could hear the play and kind of see it from afar, but I wasn't really watching. Until, in the middle of "Cinderella," I heard one of the actors saying something about "Prince Cubby," and there was Cubby in a red cloak and crown going up on stage.

So then I had to sprint over to the stage with my camera, leaving Jack sleeping by himself (I could still see him, so it was okay), to get a photo. Unfortunately, my camera was on some kind of setting that totally washed everything out in the blazing sun. The MiL was also there, though, and she took a photo with her phone. So that's all I got. 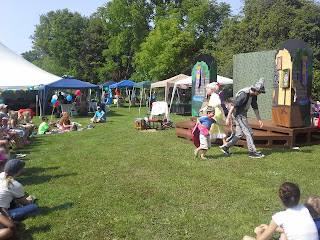 The wolf (as in Red Riding Hood) directed him. Once again, Cubby takes direction well.

He needs to work on projecting, but otherwise did very well for his stage debut.

A day for dreams to come true, apparently.
Posted by Kristin @ Going Country at 11:03 AM 2 comments: