Friday Food: A Bunch of Semi-Failures


I seem to have sort of half-failed on many things coming out well this week, and yet, everyone still ate. Proof you don't have to be a perfectionist in the kitchen to feed people.

Long version: This is the meal that makes all my children's dreams come true. I usually dash their hopes by serving rotini, because it's much less messy. But this time, I indulged them with spaghetti.

I often plan on making meatballs but rarely follow through. All that mixing and rolling is just so daunting, even with my streamlined method. But I did it this time! I even went the extra mile and grated Parmesan, which I put in a little bowl on the table with a little spoon so the boys could all scoop it on their spaghetti by themselves.

Well, except for the part when I did this with the extra sauce I was putting back in the refrigerator until dinnertime: 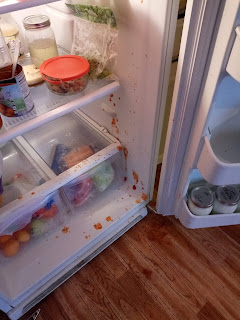 Almost as annoying to clean up as milk.

Long version: A. got Cubby some rabbit snares in an attempt to reduce the excessive numbers of rabbits that infest our property. This has the double benefit of ridding us of rabbits that will no doubt plague my soon-to-be-planted garden, and providing us with meat.

I browned the rabbit--just salt, pepper, and garlic powder--in a skillet, then put it in the oven with the potatoes to finish cooking. Then I used the skillet to cook the pork, which was just chunks of lean pork fried in bacon fat with salt, pepper, garlic powder, and the MiL's paprika.

I indulged my children this time and let them eat carrot sticks rather than bell peppers or squash, neither one of which are on their list of Acceptable Vegetables.

Yes, still working my way through All That Squash. I will emerge victorious on the other side. With a large dose of Vitamin A.

Long version: I didn't even follow my own recipe for grillades, because I didn't want to use flour. So I didn't make a roux or coat the cube steak before browning it. It didn't taste quite as good as it should have, but it was still fine.

I did follow Sara's directions for frying okra, though, with some of the rest of the frozen okra I bought on accident. Well, except I didn't have cornmeal, only corn flour. Maybe that's why the coating all came off as soon as I put it in the oil. Or maybe I didn't let it defrost enough before coating it.

In any case, the okra didn't really have any coating on it in the end, but it was still pretty good. Certainly better than the roasted okra. Thanks, Sara!

This iteration of extemporaneous soup was a couple of spoonfuls of sauce from the grillades, some of the diced cube steak, diced carrots, cabbage, rice, and chicken stock. It was really good, actually. Cubby certainly appreciated it, despite not having much appetite.

Long version: This was the rest of the pork I had defrosted a couple of days before. I cooked it exactly the same as on Saturday.

Yeah, that macaroni and cheese . . . I cooked the pasta, then drained it and in the pot melted butter, heated milk, melted cheese, then added the pasta and the cheese just straight-up clumped. There was just a big glob of cheese in the middle of the pasta.

This is the first time this has ever happened to me. Maybe it was because I only had mild cheddar? That's the only kind of cheddar at the tiny grocery store.

Anyway, I did what I always do when I have trouble with cheesy things: Add more cheese. I also turned up the heat and stirred it quite a bit and it eventually coalesced.

It wasn't all that good, though. Mild cheddar never is. Everyone else liked it, though, and Jack ate three helpings, so it couldn't have been that bad. 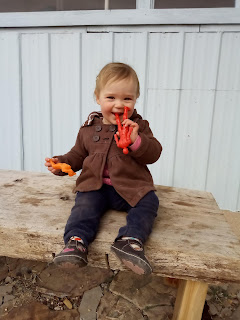 Or you could just eat Iron Man. I hear he's pretty tasty.

Long version: Hey, look at me having tacos on a Tuesday like a real Internet Mom! It was completely inadvertent, of course, but whatever. I'm cool like the other kids.

I made the pinto beans this time with nothing but chicken stock and salt. Unfortunately, I oversalted them, which is pretty hard to do with beans.

See, I have this pink Himalayan sea salt that I got from the lady we buy milk from. She gave me a pint jar of the salt--which she buys in fifty-pound quantities--as a thank-you for sharing my sourdough starter with her. The only problem is, it's not ground, so the pieces are big. Like, about the size of Pop Rocks (remember those?). I don't have a salt mill, and don't want to buy one for just this salt that I am not planning on replenishing, so I've just been using it in hot liquid-y things in which it will dissolve. But it's very hard to measure, as I'm not used to the size of it. Thus, sometimes I over-salt, and sometimes I under-salt.

It is good salt, though, when I get the amount right. And the beans were certainly edible, just a bit salty.

Long version: I continue to give Charlie a single piece of carrot every time I cook them, despite his vocal dislike of cooked carrots. I tell him, "One day, you're going to love them. One day, you'll take your bite of carrot and realize how good they are and ask me for more."

That day has not yet come. He ate his single piece with a big smile and apparent relish, and then gleefully exclaimed, "I tricked you! I still don't like cooked carrots."

One day. I just know it.

Long version: Half the onion in the meatloaves, half in the cabbage, and none to stink up my refrigerator.

I tried again frying the last of the accidental frozen okra, this time making sure to really let the okra thaw enough that it was definitely slimy and, presumably, suitably adhesive for the corn flour. Nope. Still all fell off. Still tasty, though, and everyone but Charlie ate it. He ate some raw cabbage I had saved for him, because Charlie will always be his own man.

* Just don't tell them this was the sauce that had Sneaky Squash in it.


On Sunday when A. was on his way to cut wood down the road, he noticed the first tiny wild flowers starting to bloom. He suggested I take a picture to document the fact that here in our new home, flowers start appearing in January. 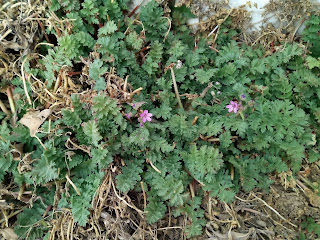 They're teeeeny tiny, and also, probably some kind of weed, but who cares? Flowers! Outside! In January!

A.'s garlic is also starting to poke above ground, as is the random garlic Cubby planted in his "garden" near the propane tank.

But perhaps most exciting? Lettuce. There is lettuce in my house. 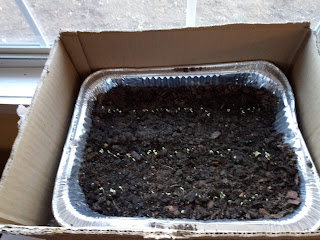 Okay, so it's a ways from actually being eaten, but still. Lettuce! In January!

I had ordered those seeds last August for fall planting from High Desert Seeds, but they didn't come in time, thanks to some kind of mistake on the part of the company. It was irritating at the time, but it worked out, as we ended up moving anyway.

So my Drunken Woman* and Bronze Arrow lettuce seeds waited patiently in their envelopes. I realized recently that while the temperatures at night are still far too cold for lettuce plants, the daytime temperatures and, more importantly, the strong sun meant that probably I could put lettuce in the big plastic tubs that A. got for me.

The tubs are all over the place here, just blowing around--they hold some kind of protein feed that the ranchers give the cattle in the winter--and A. found a couple when he was on public land. He brought them home for me for container gardening. Their first use is going to be for lettuce, as I can move them in and out of the enclosed porch with A.'s dolly as needed.

They won't hold all of those seedlings by a long shot, but A. has some kind of plan involving smaller pots and a large pallet tray or something. He's motivated to help me ensure my lettuce supply, as always.

It's 27 degrees today with a 25-mile-an-hour wind, so it doesn't feel much like spring. But it's coming. The flowers, garlic, and lettuce know. And so do we.

* I freely admit I bought this purely because of the name, and I bet I'm not the only one. Never underestimate the power of good marketing.

Labels: all about me, gardens, New Mexico, the A team

When I Know I'm In For It

The baby woke up for the day at 4:45 a.m.. At the same time, the world's most dramatic child staged his Academy-award-winning "I'm dying of a cold" performance.

A start like this does not bode well for the rest of the day. 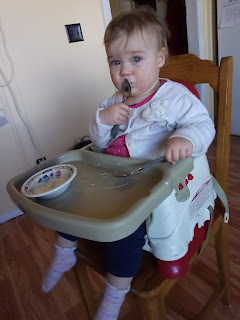 Perhaps double spoons for not-eating applesauce will help? Perhaps not.

I made an extra cup of coffee this morning. It seemed like an extra-coffee kind of day.

I am currently drinking that coffee while Poppy takes an early nap, the sick child watches a documentary about guns of Great Britain, and A. is at church with the rest of the crew. So at least I have this moment.

Always look on the bright side of life.