My children are now physically better, but their behavior is at the atrocious stage. ATROCIOUS. This part of the recovery from illness entails a hell of a lot of screaming (from them) because I dare to do things like require them to brush their teeth and eat in a chair rather than on my lap. OH, THE INJUSTICE. 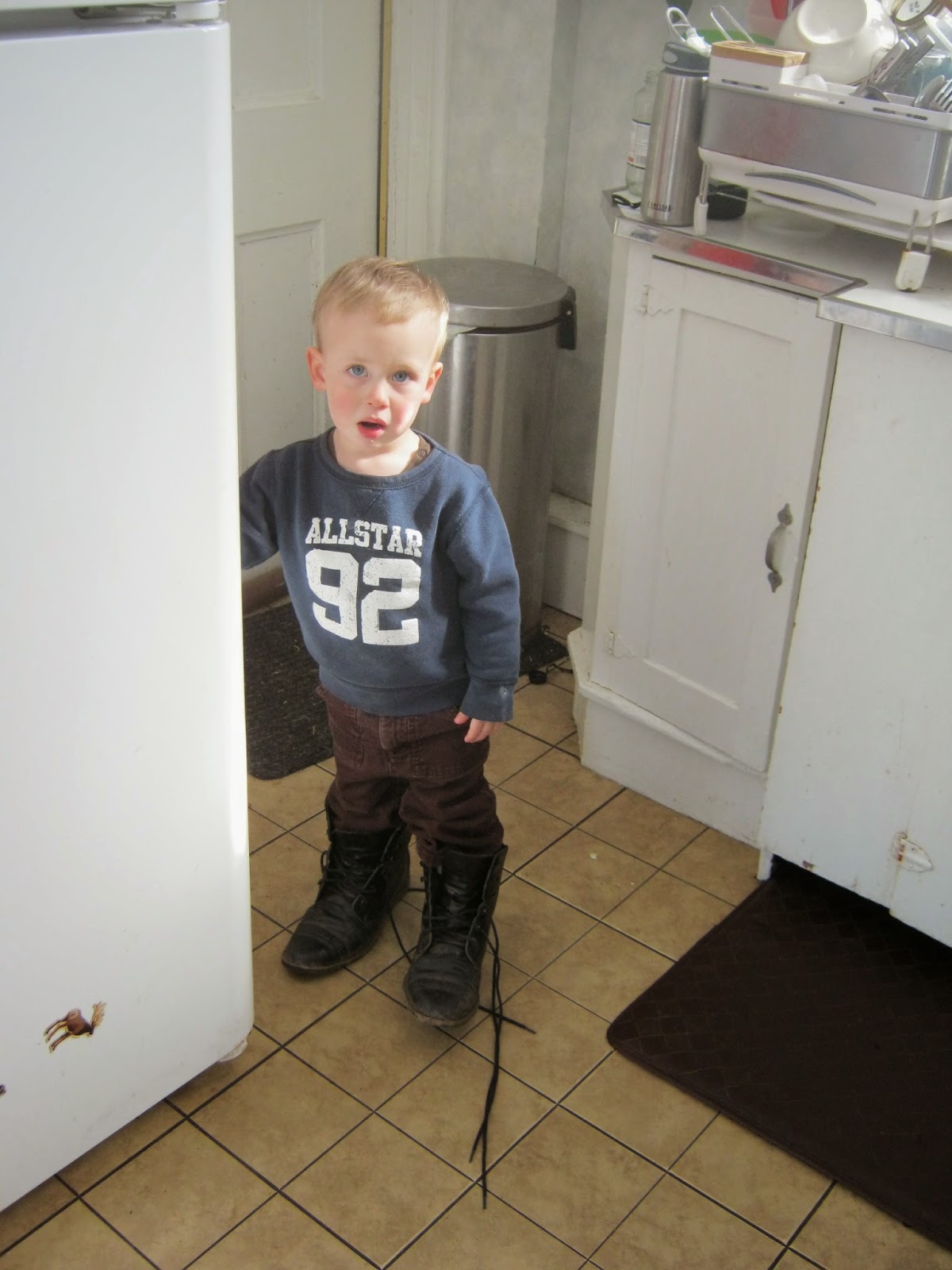 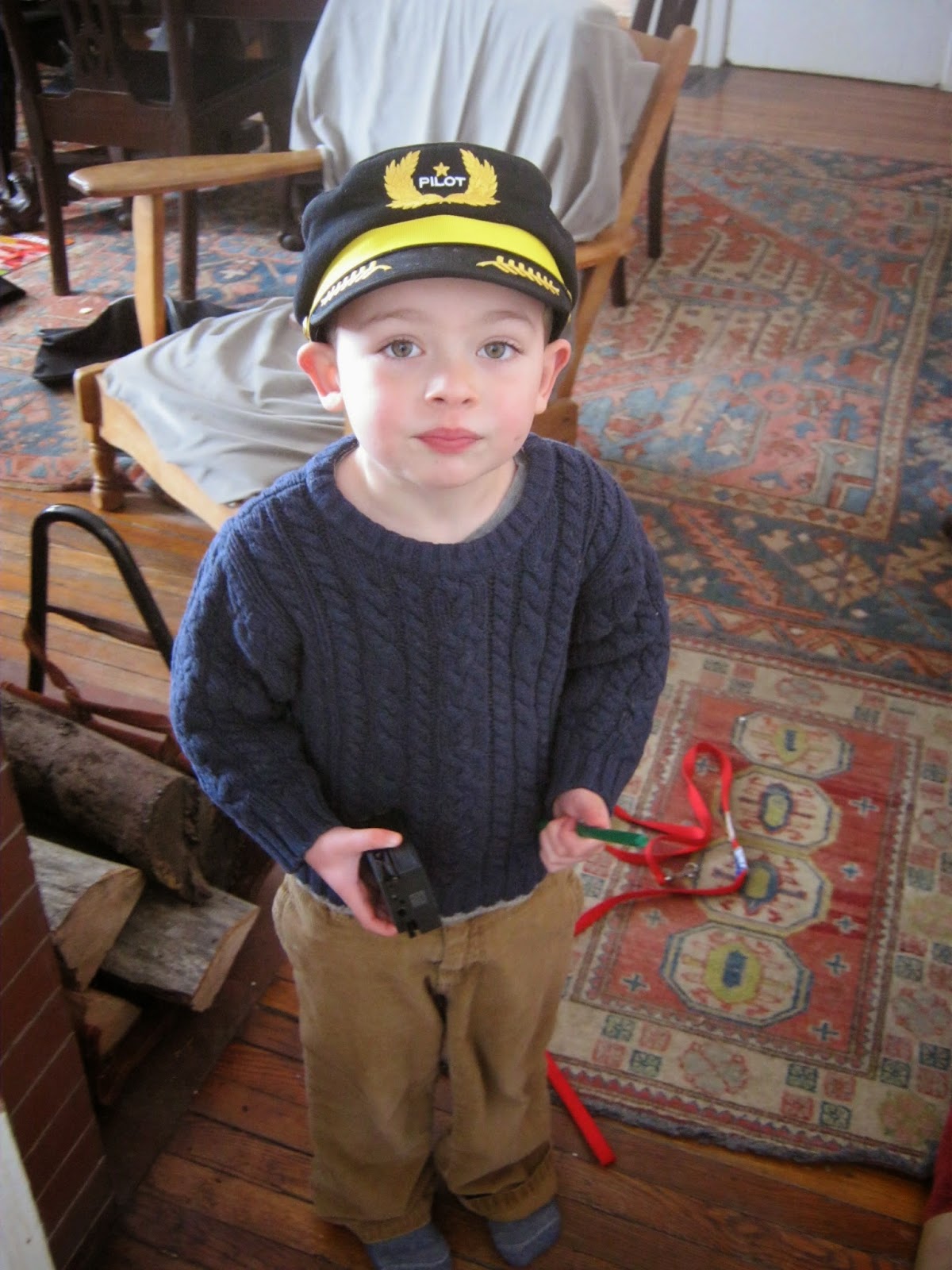 One of the many dichotomies of parenthood: Loving your children so much, and yet wanting equally as much to run away from them. Well, almost equally.

Have a lovely weekend, my sweets.
Posted by Kristin @ Going Country at 5:19 PM 2 comments:

Labels: all about me, Charlie, Cubby, family

Wow, yesterday's post sounded a little bit desperate, didn't it? Sorry about that. We're fine! Everyone will be fine! Soon we'll all be our usual merry selves (well, those of us that are merry when healthy, anyway) and this tribulation will be but a fading memory.

But in the meantime, I haven't vacuumed my house in more than a week.

Vacuuming is one of those things that goes by the wayside when I'm on the ropes. Along with dusting, which really needs to be done now, since I cleaned out the woodstove yesterday and now everything is covered in a fine layer of ash.

But I set these things aside in favor of the things that I will never give up on, no matter the circumstances: Cooking and laundry. Even in the darkest of days--that is, the newborn baby days--I still do laundry and cook. Every day. Because those are the things I need to do to feel as if I'm maintaining some control over my life.

But I know there are some people who would rather eat Stouffer's every day than let their floors get into the state mine are currently in (that state being, of course, totally disgusting). So tell me, my lovelies: What are the non-negotiables for you in your daily life? And what do you readily give up on when life dumps on you?
Posted by Kristin @ Going Country at 4:20 AM 8 comments:

Labels: all about me, Audience Participation Days, domesticity

The shearer came this morning, but for the first time ever, I didn't take any pictures.

There are many reasons for this, but it all boils down to one: snot.

More specifically, the illness that has afflicted the family and caused there to be little sleep and no energy for any of us for the past, oh, week or so. Just getting the kids dressed and out the door this morning at 7:45 so I could help with the gate and bag up fleeces--while holding Charlie, who is still in the depths of his misery--was all I could do.

I'm sort of played out, is what I'm saying, and grabbing the camera just didn't even make it onto the list of imperatives.

Anyway, the shearer only sheared four sheep. Once again, many reasons for this, none of which I'm going to go into here right now. Someday soon I'll update you on the sheep flock, but not right now.

Be back when I'm not in the trenches of germ warfare, 'kay? Peace out.
Posted by Kristin @ Going Country at 9:38 AM 1 comment:

Labels: all about me, family, sheep

The Eating of the Green

Yeah, I definitely woke up today thinking St. Patrick's Day was tomorrow. I don't know why I had Tuesday fixed in my head, but I did. Not that it mattered in the least, since the only thing I do to celebrate is make corned beef.  Considering that I didn't even get my beef in the brine until yesterday, we are still several days from even that lame attempt to mark the holiday.

I had a hard time explaining this holiday to Cubby, who was understandably confused not only by the general idea of saints (my Catholic upbringing is not being passed on to him very well, I'm afraid), but also the whole concept of a country called Ireland and Irish immigrants wishing to reconnect to their roots.

Whatever. I was totally making it all up anyway.

I did, however, tell him about this one time when I was a kid and my mom decided to color our mashed potatoes and milk and whatnot at dinner with green food coloring on St. Patrick's Day. She was fun like that*.

Cubby demanded an explanation of food coloring, and then stated very definitively that he did not want any of that in his food.

Right. So much for that festive little touch.

But we had a green meal anyway, and this amused me very much. Mostly because I did it completely inadvertently.

I had planned to have pasta with pesto for dinner tonight, in an attempt to get Cubby to eat more than three tablespoons of food in a sitting. He was very, very sick this past weekend, and was not down with the idea of feeding his cold. He hasn't been eating well at all, but he's feeling much better now and pasta with pesto is pretty much his favorite food in the world, so . . . green pasta it is.

Besides, I still have two gallon-sized Ziploc bags full of pesto cubes in my freezer from this past summer that I really need to make inroads on.

I also made a green salad, since I had lettuce in the refrigerator. And there we have it: A green St. Patrick's Day meal with no food coloring in sight.

The strawberries we had for dessert didn't really fit the theme, but I had already taken them out of the freezer to defrost. There were a couple of bits of renegade leaf still in there, so we'll count that.

And, uh, that's it. We didn't wear green, drink Guinness, or sport anything that reads, "Kiss Me, I'm Irish," but we had green food. Good enough.

* She also made us an April Fool's Day dinner one year in which we ate out of cooking pots and drank out of bowls and other crazy stuff like that. As I said, fun mom.
Posted by Kristin @ Going Country at 5:35 PM 1 comment:

In Which the Butcher Makes Me Laugh

I mean, how often does that happen at a butcher shop? Nice guys and all, but not exactly comedians. But oh, did I laugh when I went to the butcher yesterday. Lemme tell you all about it.

When we would get our whole cows, we would get a couple of briskets in the boxes, maybe six or seven pounds each. That's what I thought I was getting.

When the butcher told me that it came to $57.49, I was kind of shocked. I was thinking, "Man, that is some premium beef." But it was my fault for not asking the price per pound when I ordered it. So I handed over my debit card.

My next inkling of something different than my expectation was when I saw the box the brisket was in. It was big. And reinforced on the bottom with duct tape.

And then the butcher said, "I'll carry it to your car for you."

What? He thinks I can't carry a brisket? What do I look like, a weakling?

I made some joke about having to lift it into the pot, so I might as well train by carrying it to the car.

Then I pulled the box off the counter, looked inside, and . . . laughed.

There was this HUUUUGE slab of beef, all covered with white fat, and just . . . big. Like, fifteen pounds maybe. So, so big, and so, so not what I was expecting to see.

It appears that the brisket that we would get from the meat processing place was all nicely trimmed and in two pieces: the flat and the point. I had never seen the two together.

So then I had to trim this thing up and cut it into pieces. 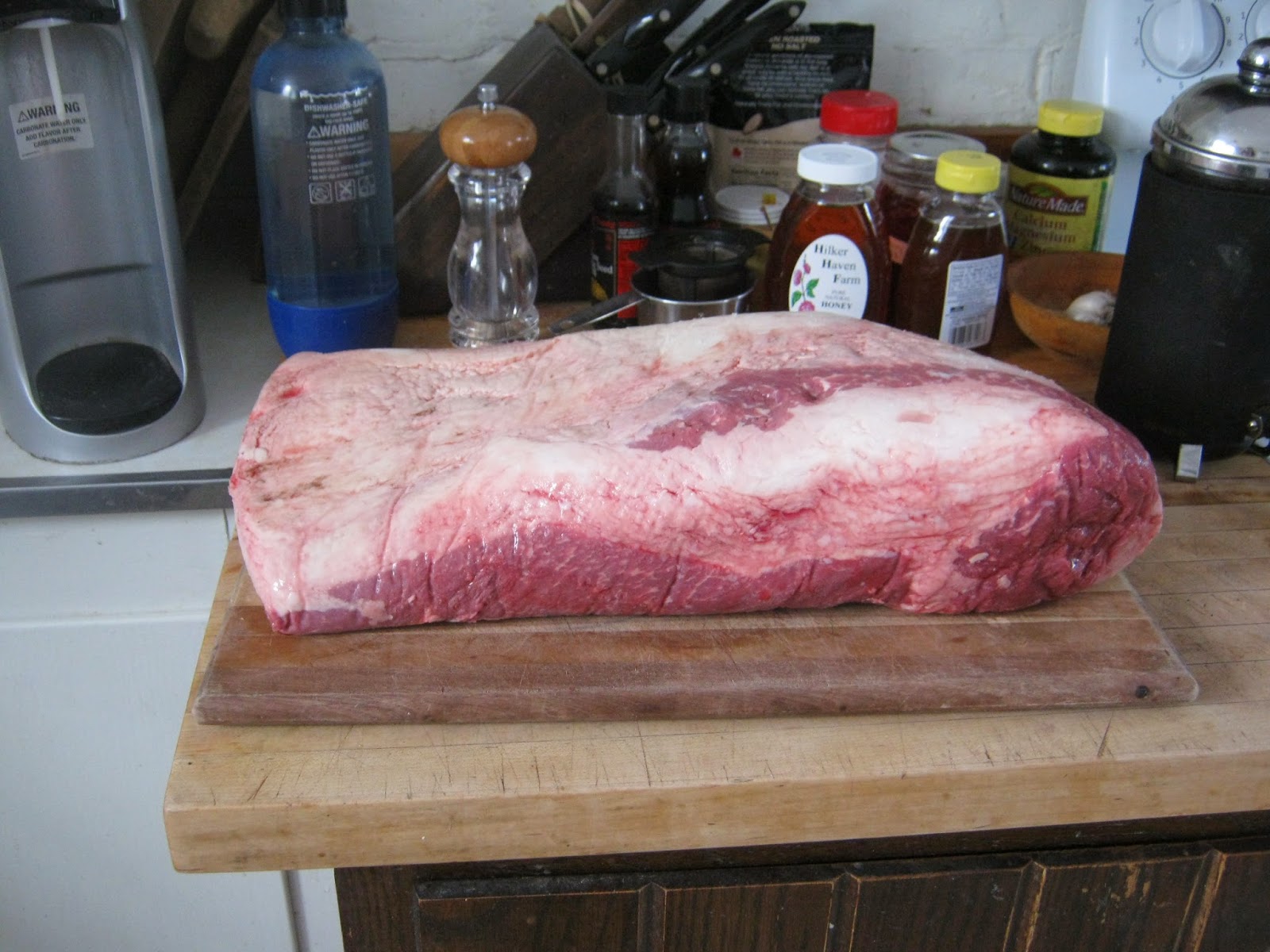 My cutting board was barely big enough. 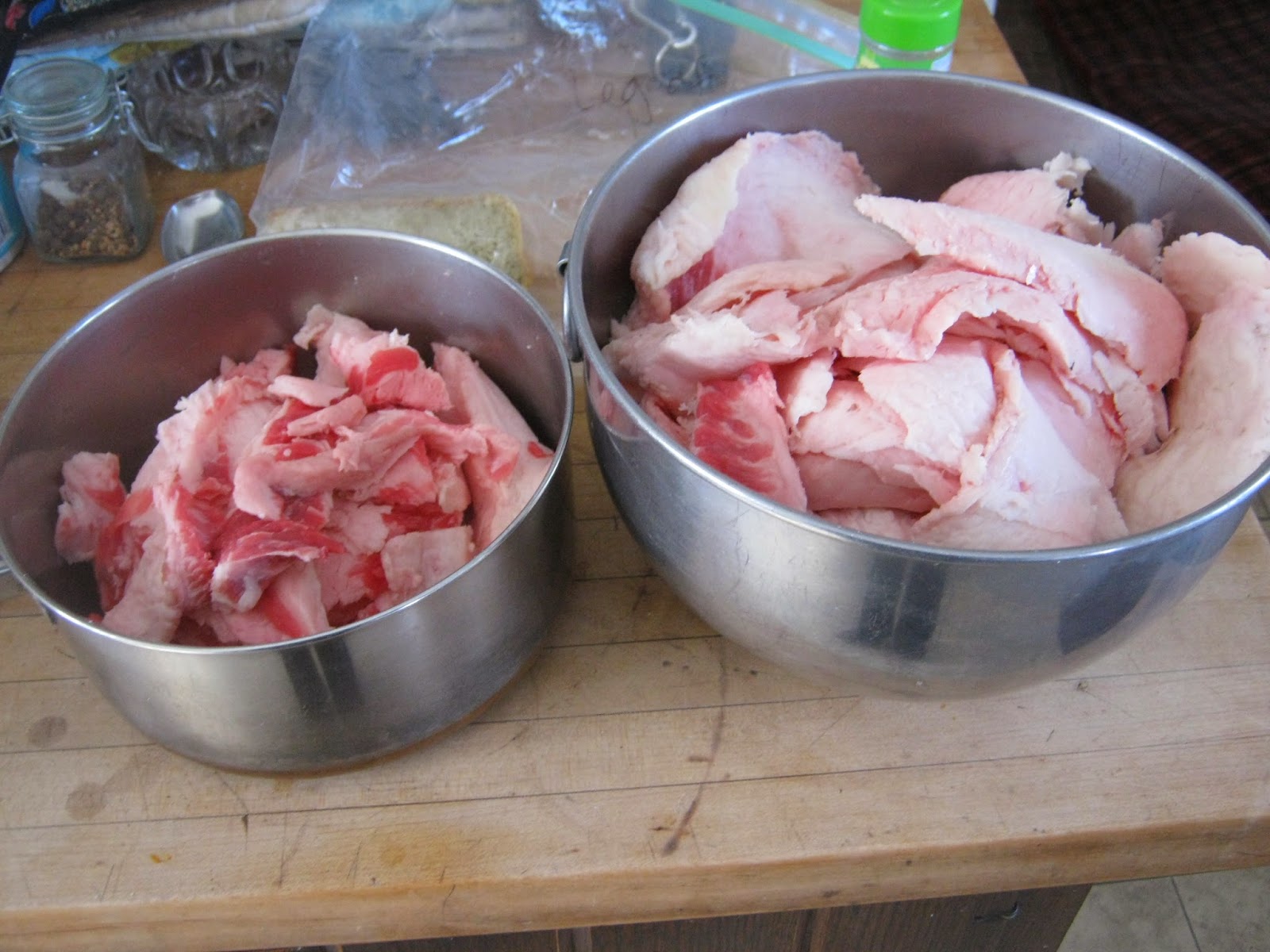 So that took care of about five pounds of the brisket.

Then I sliced off the point, following this really thick kind of vein of fat that runs diagonally along the end of the brisket and separates the two pieces. 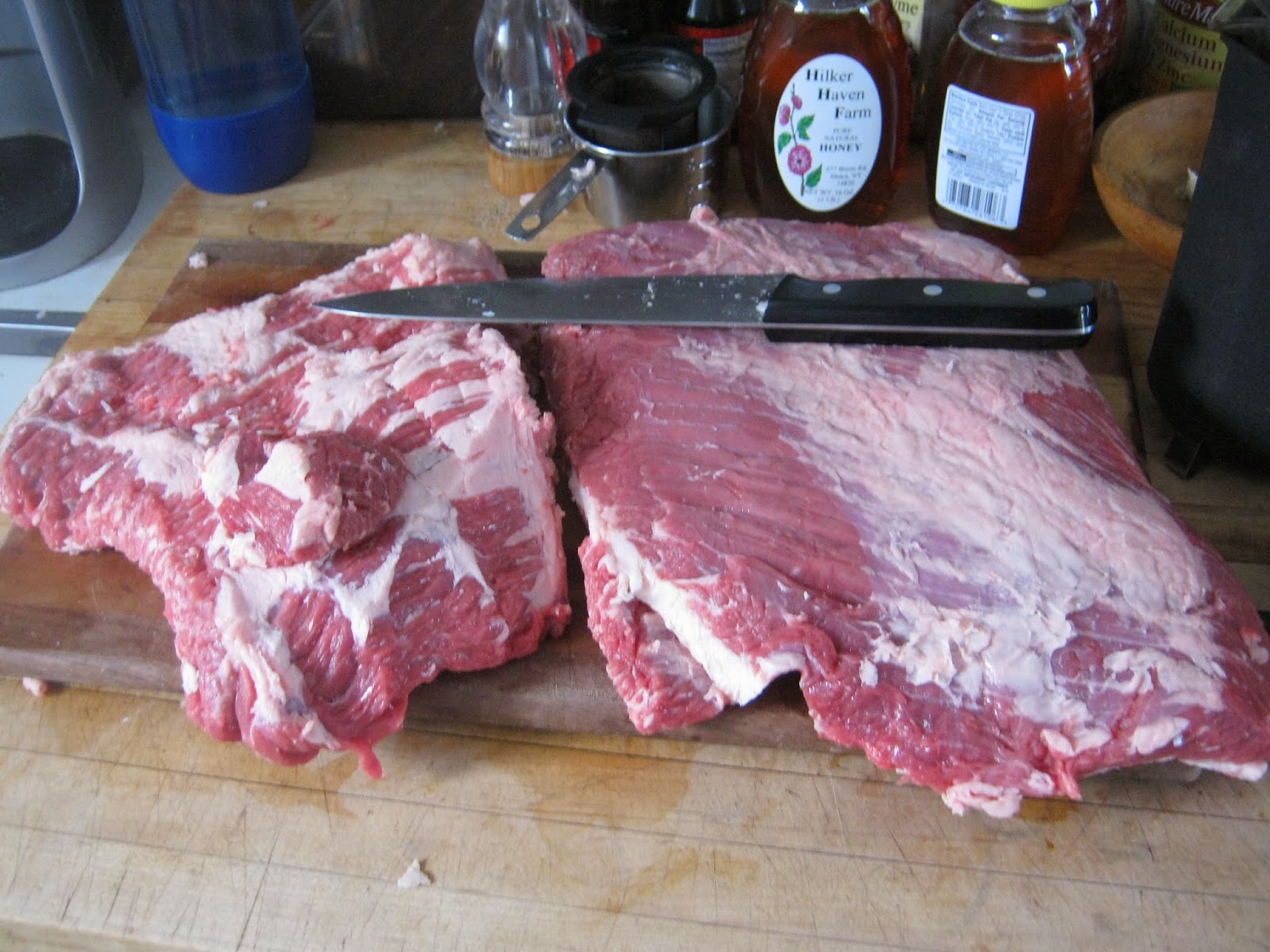 Except I missed a chunk of the point and had to cut it off separately. Who cares.

I am obviously no stranger to cutting up meat, so this wasn't as intimidating as it could have been. The nice thing about trimming meat like this is that you can't really screw it up too badly. I mean, no matter what you do, you're gonna end up with food. And the cow is past caring what you do to it, so you've got nothing to lose.

While I was doing this trimming, I was also heating my brine for the corning part. I decided to corn the point and save the flat for some other preparation.

Any recommendations for The Best Brisket Ever? I happen to have a brisket to spare.