The Worst Picnic Ever

Long story about how we got there, but yesterday the whole family "enjoyed" (you'll see why the quotes in a second) a picnic in a lakeside park that involved forty degrees, wind, an excessively loud riding mower fifteen feet from our table, and some really aggressive seagulls.  It was a very short picnic, for obvious reasons.

But there was a playground there, so at least Cubby was happy.
Posted by Kristin @ Going Country at 6:16 AM 2 comments:

Nothing tests your skills at child wrangling like having to keep a toddler and a small baby happy for an hour in a small room.  Which is what I did yesterday at the dentist while A. got his teeth cleaned.

I originally called for an appointment for Cubby, since our dentist said he likes to see kids for the first time around three years old.  But when I called, the receptionist told me that the way they do it is just have the kid go for the first time with the parent for the parent's visit, so the kid can see the whole procedure without any pressure.  And then, maybe the dentist could just quickly look around the kid's mouth.  Okay, that much made sense.

Except . . . what is the kid supposed to do while the parent is getting his or her teeth cleaned?  I mean, I can't be alone in thinking my child will never, ever behave himself for an hour while I'm immobile in a chair with some woman's fingers in my mouth.

I told the receptionist that my son would never sit still for that long.  She said they have a little toy barn and "usually the kids just play with that on the floor during the cleaning."

I may have held the phone away from my ear to stare at it in utter disbelief at this point.  Seriously.  What kind of three-year-olds are showing up at this office and what have their parents drugged them with?

Anyway.  I decided the best thing to do would be to make an appointment for A., who has not been to the dentist since we last had dental coverage lo these many years ago.  That way, he would get his overdue check-up and I would be on hand to control the little cherub.

So we did.  And it was . . . challenging.  There are tools at a dentist's office, you know.  And Cubby has never seen a tool he didn't want to immediately grab and operate.  But first he asks a thousand questions about what it does and how it works.  So we went through the whole million answers phase and then got into the wanting to play with them phase.  And of course, he couldn't play with them.  And he was not happy about that.

He was actually very well-behaved, mostly because I kept up a constant stream of talking and distractions from the time we walked in until A. was set free from his dental prison. I was also holding and trying to placate Charlie, who was hungry and who I did not want to nurse right there in the room with Cubby grabbing at the X-ray machine.

So. Good times all around.

But A. did get his cleaning, the dentist was able to look over Cubby's teeth and didn't spot any problems, and Charlie only cried for about two minutes when we first got there. 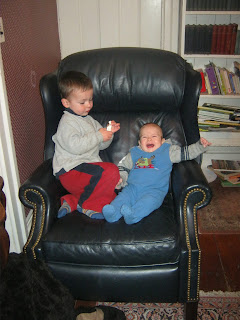 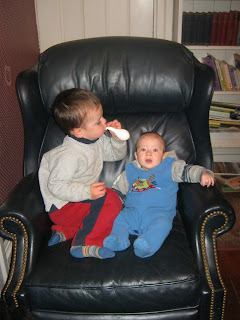 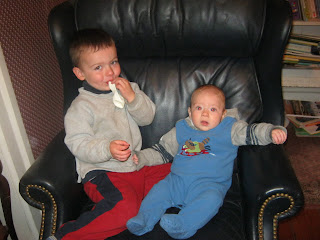 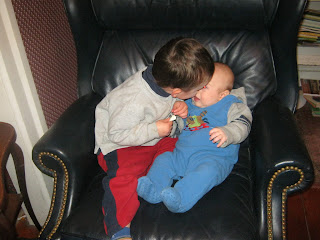 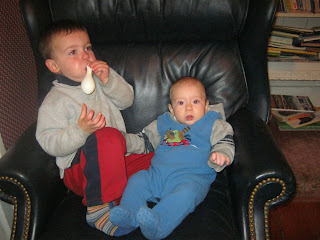 It snowed this morning.

The woodstove is burning all day.

The furnace is in use now, too.

A. is going to drain the water pump on the beach in anticipation of a hard freeze tonight.

Cubby wore his long underwear pants for the first time yesterday on an excursion to the gully with his daddy.  (And he came home freezing because he thought it would be a good idea to go wading in the stream and fell in.)

On today's gully excursion, Cubby wore his snow pants. (He did not fall in the stream again.)

It may still technically be fall, but it's looking a whole lot like winter from where I sit.

What are your signs of winter, poppets?
Posted by Kristin @ Going Country at 11:00 AM 7 comments: